When I was asked to review ‘The Chicago Blues Brothers On A Motown Mission’ at the Leeds City Varieties I was in two minds whether or not to accept.

It may come as a surprise to my regular readers that I have one mind, let alone two! The reason for my dithering was that The Blues Brothers is my absolute favourite film of all time, not least because it features the music of Stax, Atlantic and other hard core soul labels, with the odd Country and Rock and Roll tune thrown in to complement the storyline, so to have a show featuring Motown did not sit easily with me. Always one to approach life with an open mind I decided to go along and give it a try; why not. The premise of introducing the Tamla sound to the show was cleverly explained by the use of a fake news item projected onto the back of the stage.

For those of you who are not familiar with The Blues Brothers, they were a spoof soul band comprising Dan Ackroyd and John Belushi who appeared on the American satirical show Saturday Night Live and became so popular that they released a couple of albums, Briefcase Full of Blues which went to No.1 in the US and became the biggest selling blues album ever, shifting over 3.5 million copies; and Made in America, which again was a huge hit. The backing band was drawn from the best of the best session musicians, including Steve Cropper who wrote several iconic songs, the most famous of which is probably ‘Dock of the Bay’ for Otis Redding. They became so popular that the act spawned a spin-off film featuring the top actors and musical artists of the time in cameo roles. The likes of Ray Charles, Aretha Franklin and James Brown rubbed shoulders with Carrie Fisher and Twiggy. You can see why I wondered how a tribute band could compare with a stellar cast like that. Another reason for apprehension was that I had the great fortune to see the original Blues Brothers Band in Bradford when they toured the UK in the early nineties, so heard Steve Cropper, Donald ‘Duck’ Dunn, Murphy Dunne, Tom ‘Bones’ Malone, Matt ‘Guitar’ Murphy, Mr Fabulous’ Alan Rubin and Willie ‘Too Big’ Hall along with Eddie Floyd on vocals. Such a treat, they even parked the Bluesmobile outside Georges Hall.

OK, on to business. The Chicago Blues Brothers, like their film counterparts, hail from the mid-west, not the Windy City, but mid-west Yorkshire. Chris Hindle, aka Joliet Jake Blues, is from Bradford whilst brother Elwood, alias Gareth Davey, is a Morley lad. They made a huge play of this at the beginning, taking the rise out of their fake American accents and reverting to that of their upbringing. After all, if you are ‘on a mission from God’, it is only fitting that you use the language of His ‘Own County’. The band members were also Brits, as were the backing singers.

Owing to a misunderstanding on my part as to the name in which my ticket had been booked, I was found one of the few remaining seats by the very helpful lady in the box office but which had to be at the end of the front row bang in front of a speaker.  This meant that I had a restricted view but totally unrestricted audio! From what I could see, the energy levels of the performers were off the scale and the moves displayed in the film were recreated faithfully on stage, with the exception of the somersaults performed by Joliet Jake down the church aisle. I am sure that this was only because of lack of space on the small stage. 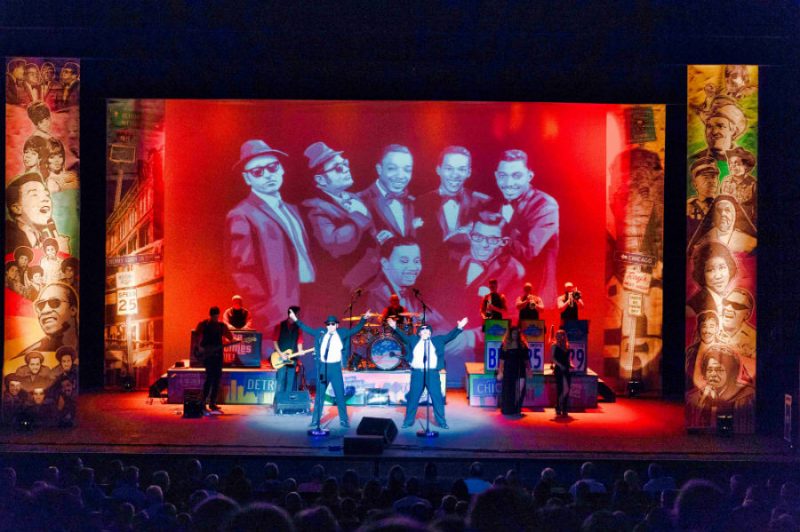 It has to be said that Chris Hindle is a gentleman of ample proportions, which is a prerequisite of the part, but his athleticism and stamina were amazing. His dancing moves, along with those of Gareth Davey were just on the right side of comedy without venturing into the silly. Their singing voices were also true to the film, with Hindle taking the higher register and Davey the baritone. Because of the introduction of the Motown element, the two girl backing singers not only sang ‘Think’ from the film but also gave us a medley of Supremes hits which worked really well, despite a short memory lapse of the words. The only downside was that the organ solo seemed out of tune, as did one member of the brass section,but I am happy to put that down to the position I had vis a vis the speaker, so probably wasn’t getting the other part of the harmony.

All that said, this was not a classical performance at the Royal Albert Hall, it was a fun night out at the City Varieties and on that level it succeeded admirably. The singing, dancing, musicianship and comedy all combined to make for a great night out which ended with the audience spending the last half hour on their feet throwing shapes, with varying levels of success, along with the performers on stage. Be warned that if you go to one of their gigs, Elwood mingles amongst the throng with a camera in order to film the dancers for their Facebook page. This is where my seating position became an advantage in that I am sheltered from most of the exposure by the speakers. Phew! You are warned that this is about to happen so that anyone on the run from the law can slip out for a few minutes in order that their anonymity can be preserved. 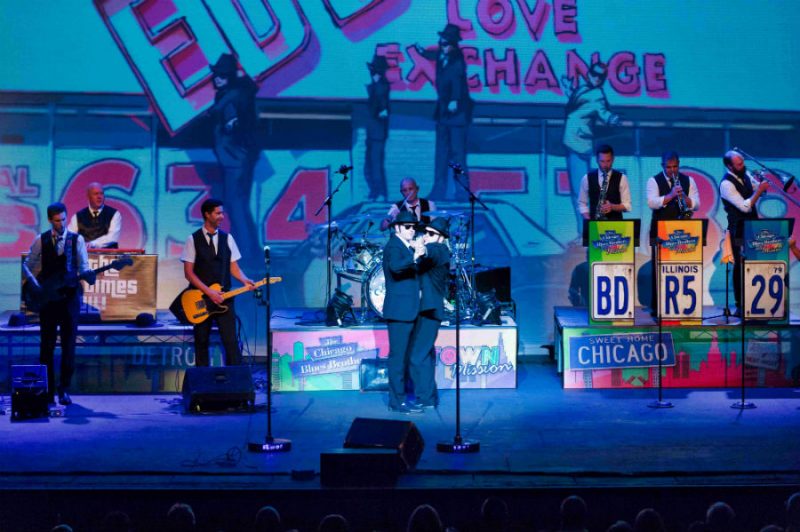 I was chatting to a really lovely couple who follow the band whenever they are in the area and confirmed my suspicion that Jake and Elwood are also two of the nicest blokes you could wish to meet. At the end of the show they danced off the stage and through the auditorium with the backing singers in order to be available for selfies and a chat with the audience in the foyer as they left; a small touch but one which was appreciated by both fan and first-timer alike. Whilst falling a little short of the original I wish them well as they are doing a great job in keeping the spirit of soul music alive, be it from Chicago, Memphis or Detroit.