A modern adaptation of ‘Kes’ which raises the story to new heights.

‘Kes’ is based on the poignant and brutally honest 1968 award-winning book ‘A Kestrel for a Knave’ by English author Barry Hines, and the 1969 film adaptation is still listed at number 7 on the British Film Institute’s top ten British Films to watch. The book is often used on the GCSE English curriculum and so is known across the country by many – just how positively it is known depends on the quality of their English lessons…..

Leeds Playhouse first produced this play to widely acclaimed praise back in 2016, using an adaptation by Robert Alan Evans. It is revised now for their ‘pop-up’ season, as their newly refurbished theatre awaits its grand re-opening.

Set in a Northern mining area, ‘Kes’ tells the story of Billy Casper, a young working class boy who finds escapism from his neglected and deprived life in the form of a kestrel, who he names ‘Kes’.  A kestrel is one of the hardest birds to train, but not for Billy. Through Kes, he finds something in his life that truly offers him peace – training, feeding and caring for the bird; that is, until one fateful day when he makes the wrong decision that has dire consequences that will last a lifetime.

This is where the original book and film leave us, but in Evans’ adaptation the audience is taken further on, showing us the middle-aged man that Billy has become and the pain that still haunts him. Performed with immense creativity and flair by Jack Lord, this middle-aged Billy acts almost as a tour guide, leading the audience through the series of events, both poignant and witty, that led his younger self to create a life-affirming bond with a kestrel.

Jack Lord’s performance is awe-inspiring in this production as he transforms effortlessly into every other character that young Billy encounters in his life, from his neglectful mother, to belligerent PE teacher, to thuggish brother. The slickness of his performance and his faultless characterisations are what makes this duologue so visually engaging to watch. 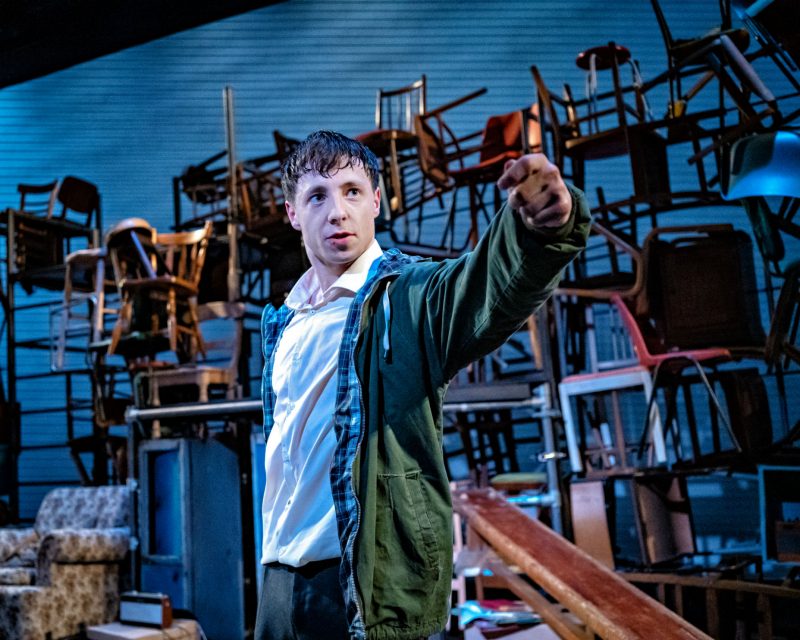 Lucas Button’s performance of young Billy stands in equal stead in terms of execution and absorption. This adult performer expertly captures the innocence, awkwardness, loneliness and confusion of a much younger boy, making the audience view him as a 14 year old without question. Button’s natural charm onstage creates a truly endearing character in Billy, whose utter love for Kes you feel with him, as well as leaving the theatre with the heartbreak he suffers.

The ensemble performance of these two actors is spectacular to watch, and their command of the large space and creative movement across it makes it a surprisingly physical performance. The towering set captures the 1960’s working class setting and is used creatively throughout, allowing the scene locations to quickly alter. The actors move with complete energy and passion around the stage, leaving the audience exhausted and grateful for the performers that it is only 75 minutes long. 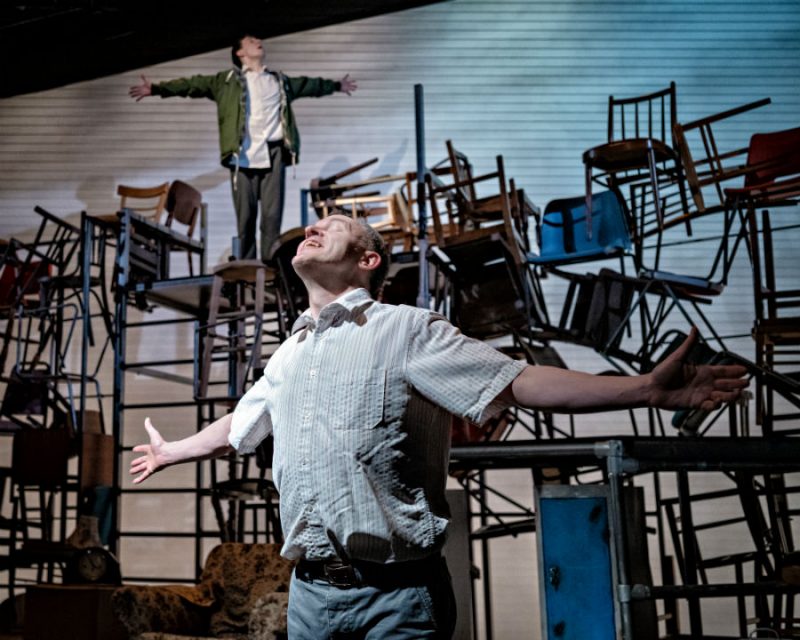 As a well-known story, it is a pleasant surprise that this traditionally gritty and realistic film has been adapted into a contemporary and creative piece of theatre. The non-linear performance allows the audience to keep engaged throughout, gradually being allowed to share Billy’s journey into falconry along an unexpected path.

The fundamental beauty of this production is that all audience members can fully engage with it, whether you know the original story or not. If you have been fortunate (or unfortunate, depending on your teacher!) enough to study it, this play takes you on a further expedition, showing you the uncomfortable, and gripping truth of the impact this single event has on a life even years later. If this story is new to you, the play keeps enough of the original charm and compassion to make you engage sympathetically with both the younger Billy and his tormented future self, as well as sharing young Billy’s soaring love for his meaning in life – Kes. 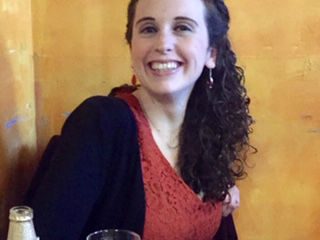 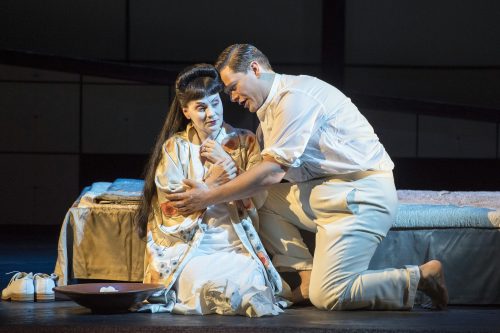 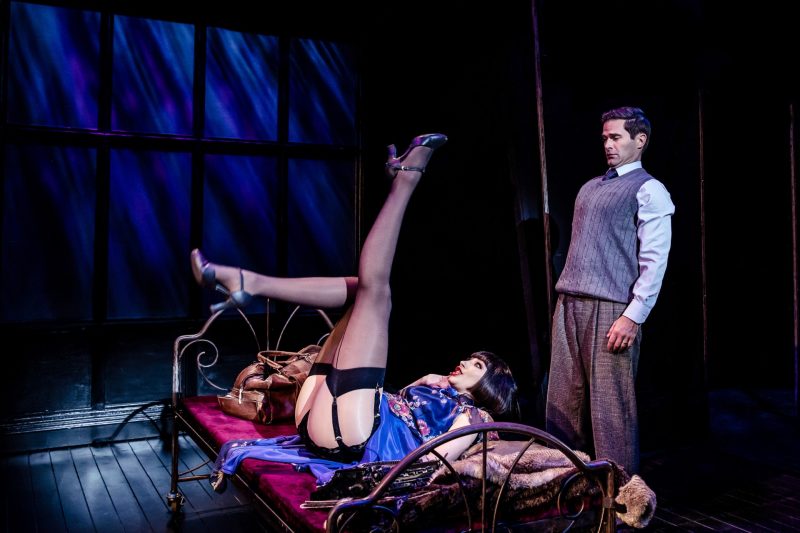 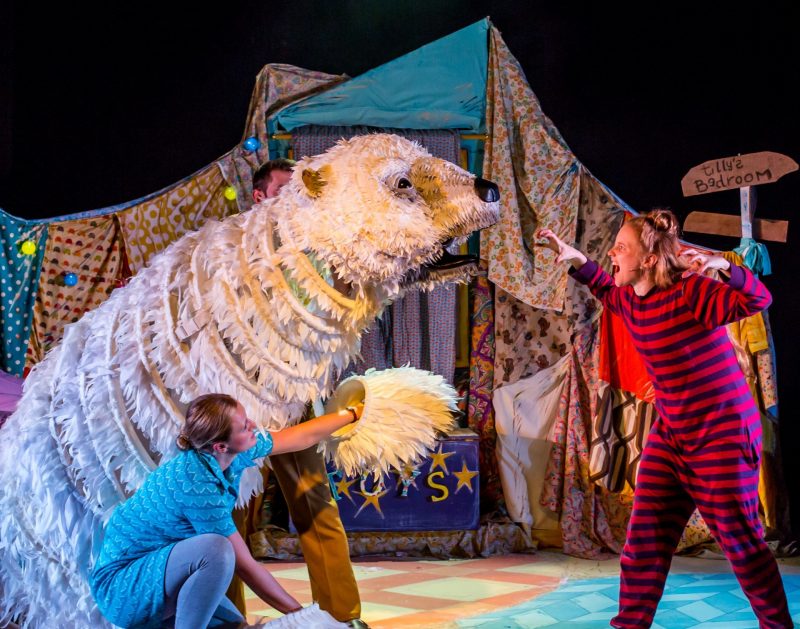