Review: Byrd-Cage: The Shape of Sound

This programme of modern and Renaissance music—exquisitely performed in an unusual setting—makes for a fascinating evening.

The Chorus of Opera North is usually wrapped up in an orchestral and theatrical setting, competing with loud soloists and orchestral instruments.  This evening of a cappella music in the intimate Tiled Hall of Leeds’ Art Gallery, then, was a welcome opportunity to hear this stellar choir in a much purer sonic environment than usual.  As much was said in chorus master Oliver Rundell’s introduction.  Rundell also said a few words about the concert’s premise, namely that, as part of Yorkshire Sculpture International Festival, there was an onus on the choir to think of how music and sculpture—”different animals”, Rundell says—both make use of the medium of space, or rather, setting for their effects.

The evening’s ad hoc concert hall is made up of two groups of chairs (each about forty or fifty) facing one another, the effect of which is to make a sort of theatre-in-the-round. It is illuminated with a light touch with colours, but these are largely unnoticed against the already colourful tiles of the Tiled Hall.  The space has curious acoustic properties which, to my mind, hindered rather than helped on some occasions.  I shall deal with these as they come up, however.

Anyway, the premise of the concert is a fascinating one. There is an old saw about music being like fluid architecture and architecture being like static music. And indeed there is something intensely sculptural about the way that a melody is carved into sonic space.

The performance begins. We hear a muffled choir from outside the hall. They are singing Byrd’s Haec dies. The aural effect is curious—and this is a hallmark of the night.  In this case, the high frequencies were entirely subdued, allowing the chunky middle frequencies to be amplified, and the men to be heard over the women.  Although this piece is in a cheerful and sprightly G major, the aural effect somehow—I remain slightly mystified—was that it sounded mildly discordant. This was intriguing, though it was a shame to lose the piece’s fine polyphonic detail.

The choir then sang a delightful unison/octave plainchant as they processed into the gallery, round the inside wall (to the left of our chairs), the back (behind us) and the outside wall (to our other side), arriving finally in the middle of the hall. This was obviously reminiscent of the procession of a church choir.

Next was a Nunc dimittis by Arvo Pärt.  In my view, this ‘dismissal’ would have been better placed at the end of the programme, especially given its moody and atmospheric harmonies.  Whilst it is a minimalist piece, it is not too punishing to listen to, although a very sharp dynamic change from pp to fff came as most unwelcome to this reviewer, who had almost been lulled to sleep by the peace of the preceding part of the piece, and who, more importantly, in the cramped acoustic of the Tiled Hall, with its hard surfaces off which the sound rebounded, a fff comes  as extremely loud indeed—in fact, painfully loud.

The next piece was ‘I want to live’ by David Lang, who is an interesting modern composer known mostly (by me) for writing pieces which are annoying and repetitive.  Then again, I don’t know a lot of his output and do not wish to disparage.  I must say, however, that this piece did not challenge my impression of his work.  The lyrics are simply the phrase ‘I want to live where you live’, sung in an annoying, repetitive rhythm and in unison.  However, as the piece developed and the harmonies separated and grew more complex, things became much more engaging. 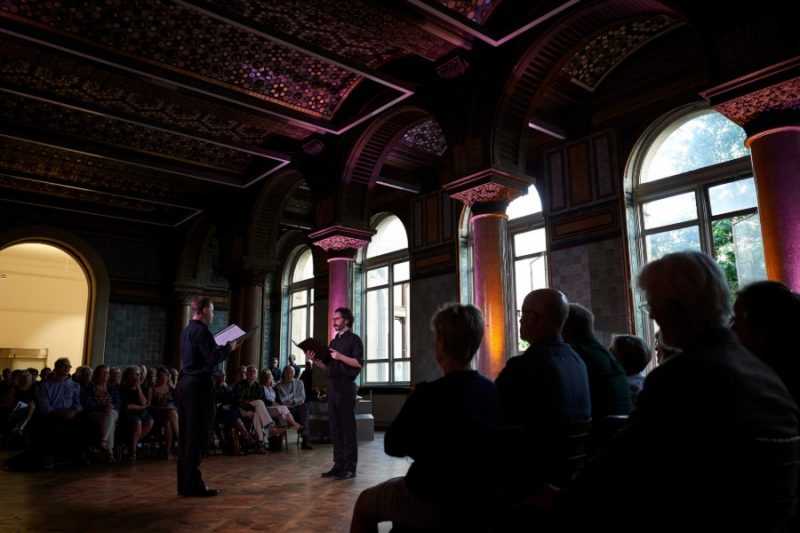 The programme describes the next piece, Cornelius Cardew’s Paragraph 7 from The Great Learning as ‘the heart of the concert’.  How something can be the heart of anything and at the same time be so ec-centric is a mystery to me! Nevertheless, this proved a fascinating piece of what is sometimes called aleatoric music—to you and me, music which is considerably different in each performance owing to its many improvised elements.  Each singer chooses a note, then disperses around the hall singing parts of the text, taking new notes, and new parts of text, from a nearby singer.  The best aspect of this was being able to hear each singer’s particular vocal qualities as they drew near—something completely lost in the usual blend of voices which choral music offers.  Nevertheless, I found the piece’s many interesting qualities began to turn tedious after about the ten-minute mark, and my mind wandered to other interesting considerations, such as where to go afterwards for dinner, and time-killing activities such as scanning the choir to see which members I fancied.

I should add that the text Cardew uses is beautiful and sparse, as is the music. It is a shame that the former was rather lost in the latter, however.  It goes as follows:

“If the root be in confusion, nothing will be well governed: the solid cannot be swept away as trivial, and nor can trash be established as solid; it just does not happen. Mistake not cliff for morass and treacherous bramble.”

A slightly odd translation, but this what Cardew used.

The next piece returned us to the Haec dies text with which we began, this time set wonderfully by Jacob Handl. The choir was split into two parts, each at a far side of the hall, behind our two sets of chairs, with Rundell conducting in the middle.  His hand movements were enormous in order to communicate with the two sides of the choir, and this brought out the hemiola (changing metres between a broad triple time and a rapid-running duple time) and the antiphonal (call-and-response) nature of the piece.  This little piece, rejoicing in the celebration of Easter, was a highlight of the evening.

The following piece by John Cage was a curious development of the nascent-intermittent sacred-secular theme which the concert was creating.  Cage is most well known for his 4′ 33″, which is four minutes and thirty-three seconds of silence.  This piece, ear for EAR, has a similarly playful premise: it is modelled on the beautiful sounds of Gregorian chant yet, rather than having a sacred text, the singers simply sing the letters e, a, and r. Yes, it is very odd. However, the piece has a stillness which made it another highlight of the concert, even if the combination of sacred and profane was a mildly disturbing one—at once irksome and thought-provoking.

Gabrieli’s Alla Battaglia was the concluding piece of the evening.  This, like, the ‘Hae dies’ (to use the Latin plural),  was an enormously joyful and rapid piece. However, like many of the moments composed of thick texture and loud volume, the detail was lost and the sound itself became painfully loud, thanks to the Tiled Hall’s peculiar acoustic.

All in all, this was a fascinating concert of pieces new and old, performed to an extremely high standard. It was great to find out about several new pieces, and it was an equally great opportunity to hear the Chorus of Opera North—very fine singers indeed—up close and personal, and in a much more intimate setting than their usual.  The Tiled Hall was a cool but not uncomplicating factor in the performance, but this is a minor point. The evening was well-spent.  Thank you, Opera North Chorus!