LIF19 – Around The World With Leeds Cookery School

Stan Graham finds out that going back to school is a real surprise after all these years – and recommends that every kitchen should have an Anne.

Until last night, the only occasions I had been in school after 4.00pm were on the many times I was given detention. In fact, I think that my parents were under the impression that standard school hours were 9 to 5 but that on the odd day we were let out at 4 as a treat.

There was no punishment involved in my attendance at Leeds Cookery School on Friday evening for Around The World; it was purely voluntary.

Leeds Cookery School conducts courses for beginners and advanced cooks alike, with all of the profits made being donated to Zest, a Leeds charity supporting people living in disadvantaged areas of the City.  Through other organisations, it enables low-income families and vulnerable people access to basic cookery skills and cookery clubs which address social isolation.  That’s all very worthy and it’s good to know that having an evening of learning, eating, and drinking, not necessarily in that order, has such a beneficial spin-off, but we were all fired up to make a meal that would be so delicious as to shut Gregg Wallace up.  If only!

As we were at a Leeds Indie Food event, the students were of varying abilities, so the course covered everything from chopping and dicing to creating the most amazing soufflé.  Most of the dishes were prepared individually under the watchful eyes of Simon and Scott, the tutors for the evening.  The soufflé, however, was a combined effort, with each of us doing our bit. 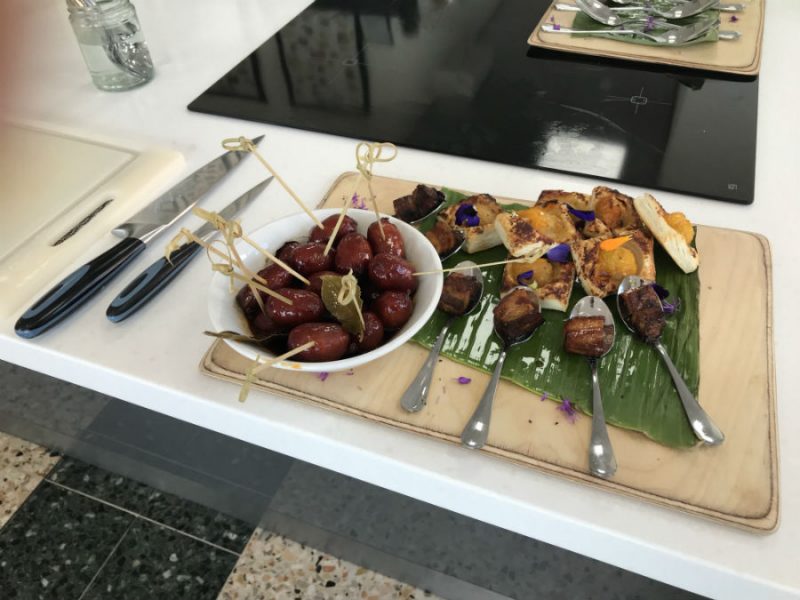 On arrival we were greeted by Simon Chappelow, Cookery School Manager, who presented us with a Grapefruit Rosemary Sparkler cocktail, and introduced us to Scott, who was lining up some welcome canapés  of chorizo, belly pork, potato cakes and miso salmon, which were delicious and reassuring, because I knew that I was going to eat something this evening which had been cooked properly. 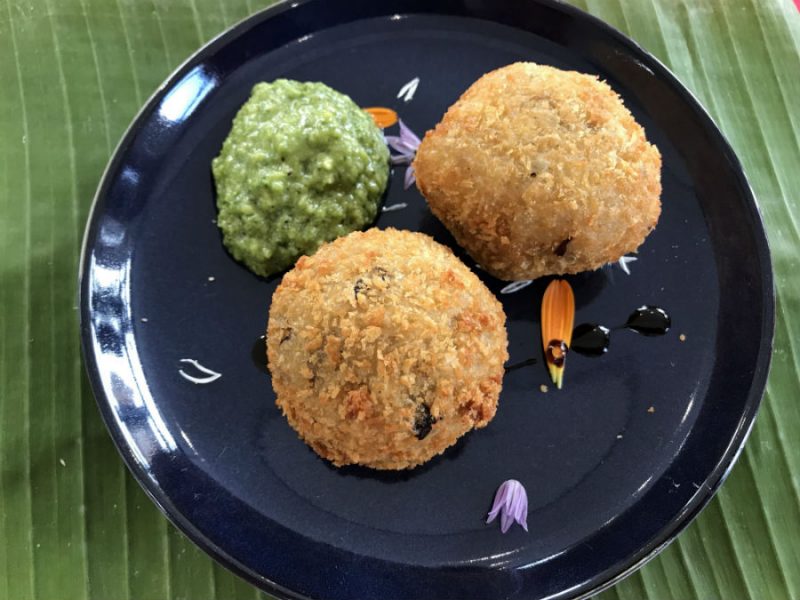 The first stop on the trip was Italy, the inspiration for the Truffled Mushroom Arancini with Pesto.  I am rather partial to this street food staple, but have never had it as a starter before.  It was pleasing to see that instead of the large version I am used to, sometimes egg-shaped, these were going to be much smaller so as not to be too filling. As we made two each it also gave us more practice.  Although the rice and mozzarella used for this dish had been prepared earlier as they needed to chill, we were still shown how to make it for ourselves.  I don’t know how good or bad my efforts were as they were all deep fried together, so anonymity was preserved.  I must say that everybody did a great job as each ball seemed to look and taste really good. 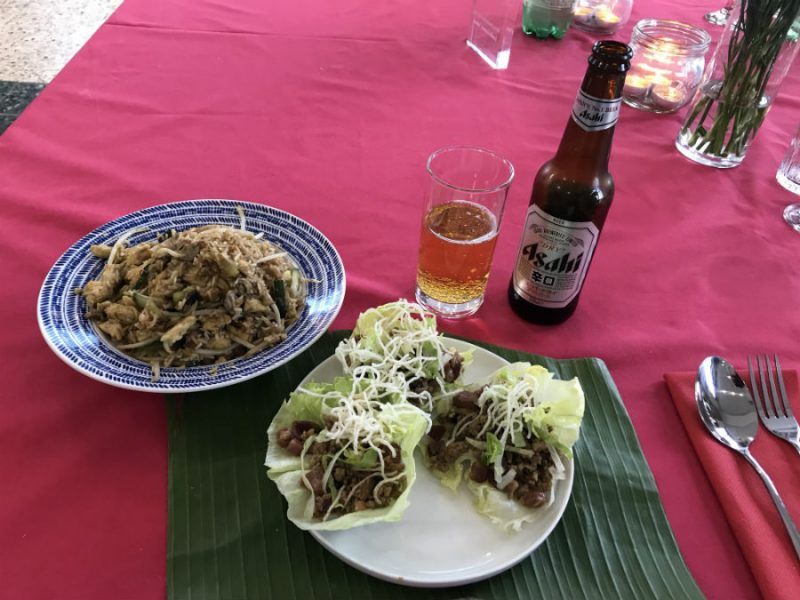 The main course comprised two Far East dishes, the Chinese San Choy Bow, which are lettuce leaves filled with stir-fried meats, mushrooms and vegetables; and Nasi Goreng, Indonesian fried rice.  These two creations enabled us to be taught chopping skills, all of us leaving with the same number of fingers we had when we arrived, and we were also given advice on the various herbs and spices used in oriental cookery. I’m afraid that my local Chinese take-away will be a customer short from now on.  The results of both dishes were spectacular and the knowledge that it was all your own work made them even more so. 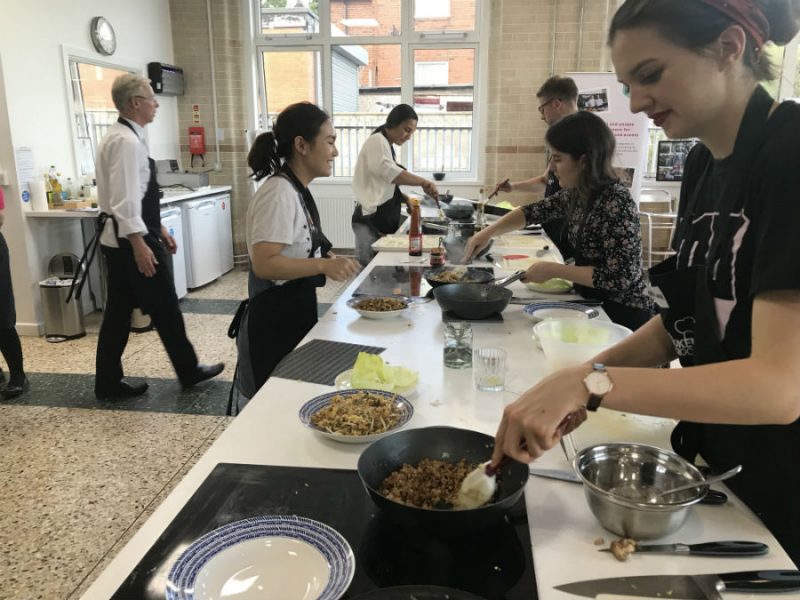 Finally, we headed to France for pudding, Raspberry Soufflé (wasn’t that a Prince song?) which, as I’ve said, was a team event.  Simon said that to make a good soufflé requires making a lot of mix, so had we all done our own we would have ended up with about a hundred lined up. This was brilliant as by this time we had all got to know each other – there were only six in the class – so knew that we would not embarrass ourselves in front of strangers.  Once again, the result of our labours was delicious and I am sure that most of us will be asking people around for a soufflé supper so that we can hone our skills. 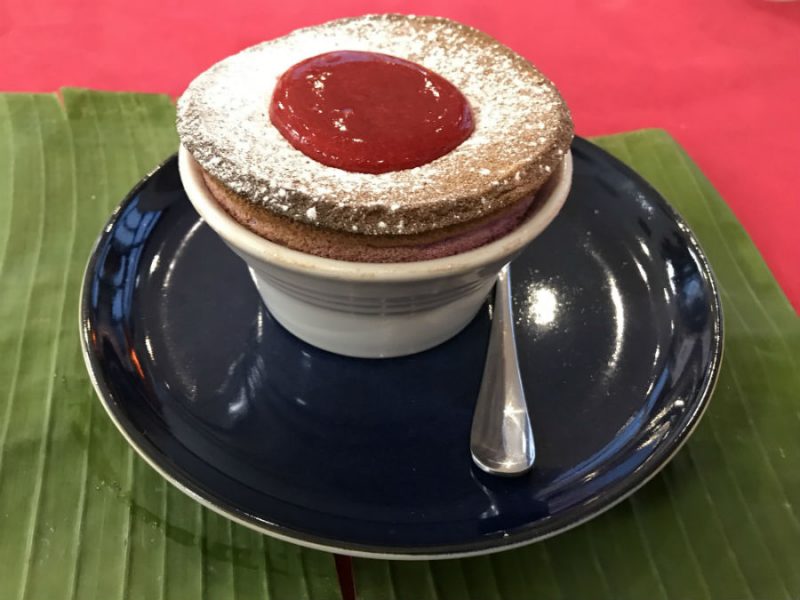 In addition to the cocktail aperitif, drinks were provided with all the courses and in between, if you so desired, there was a good choice of wines, beer, soft drinks and a dessert wine with pudding.

The kitchen itself has every modern convenience, with mixers, induction hobs, etc but the one incredible labour-saving feature was Simon and Scott’s glamorous assistant, Anne (I hope that I have spelled it correctly) who almost imperceptively moved her way around the kitchen and dining area, clearing and washing the dishes, cleaning the worktops etc and generally keeping things moving.  Despite all of this work, a broad smile never left her face all evening.  Every kitchen should have an Anne. 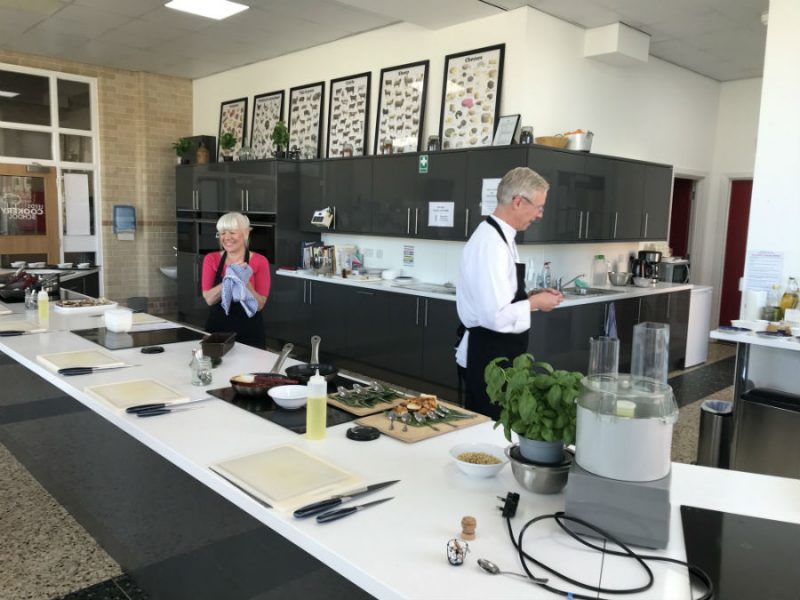 Not only were we able to eat what we had made, but we were also provided with foil containers in which to take home any excess, and there was a lot of that, so that’s the weekend sorted, then. Strangely, none of the soufflé seemed to survive.

Finally I would like to thank Simon, Scott and Anne for a very informative and pleasant evening.  When he was giving us our introduction, Simon promised us an evening of food, drink and fun.  Well, if this is your idea of fun, Simon – you are spot on!