Let’s Do Lunch at Cargo Crepe

I had not been having a very good day at all so was probably not in the best frame of mind to do a review, but the show must go on.  I mention this to illustrate what effect food, like music, can have on a person’s wellbeing, not just on a nutritional level but also on an emotional one.

At the turn of the century I used to take my late mum away to Northern France for a week in the autumn when all the little darlings had gone back to school.  She wasn’t late at the time you understand – that would have been weird.  Our  favourite trip was a drive along the Normandy and Brittany coastline stopping at various towns as fancy took us and participating of the local seafood and wine.  No matter where we chose to stop, there was one place which was always on the itinerary and that was the lovely resort of Dinard.  Not only is it a great place in itself but also, during the summer months, there is a little boat which ferries passengers across the bay to Saint-Malo, and if we were lucky it would still be operating when we got there.

The big draw of Dinard, however, was not the beach, the casino or even the Saint-Malo boat, but a small crêperie owned by a family comprising mother, father and son. They could not speak English and mum couldn’t speak French, but they somehow made themselves understood, with a little help from yours truly who can muster a schoolboy version of the language and who was extremely envious of the father’s luxuriant, typically flamboyant, Gallic moustache.  After we had offered to move tables on our first visit to accommodate a large party which had arrived unannounced, they could not do enough for us and a friendship began.

Walking into the newly opened Cargo Crêpe in Queen’s Arcade, the memories came flooding back and my mood lifted no end.  The owner, sadly bereft of facial hair but sporting a Breton top, was hard at work filling a lunch order as I told the waitress what I would like to eat – a Galette Complète at £6.50 and a 330ml bottle of Thornborough Yorkshire Cider, £4.90.  Cider is not my normal go-to drink but is the traditional tipple with which to accompany crêpes and galettes. It arrived with a Bolée à cidre, the porcelain or pottery cup which makes an innocent cafe look like a prohibition era speakeasy.

As you will gather from the Tyke rather than French cider, the ingredients at Cargo are locally produced versions of the originals, meaning that my galette comprised Lishman’s ham, three cheeses and an organic egg. With galettes it is not what you see that counts, it is what you don’t see, a bit like a wrap. What I did see was the egg, perfectly fried with runny yolk, and what I didn’t see was the combination of cheeses and the ham which were concealed within the pancake. The melted cheese was still chewy and the flavour of the ham came bursting through. Even in the humble pub toastie, cheese and ham is a great combination, but here it was elevated to a different level and dipping a forkful into the egg yolk was comfort food par excellence.  Sorry, I couldn’t resist a bit of the old Français. 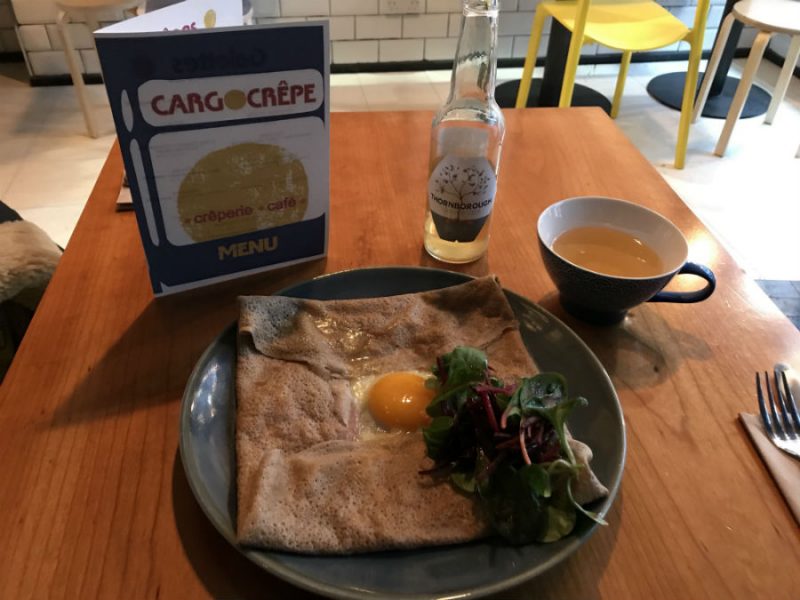 You know what it is like when you have something to eat abroad but when you have it at home it just doesn’t taste the same, well, that must also be said of this dish.  It didn’t taste like the ones I had in Dinard, it was much better, and that allows for the original’s secret ingredient of twenty years’ worth of nostalgia.  Cargo’s version is much more substantial than the French one and by the time I had finished it my appetite was well and truly sated, but I really couldn’t leave without trying one of the Sweet Crêpes on the menu.

The only one I could possibly choose was the Normandy Crêpe made with caramelised apples and my favourite topping, Chantilly Cream, at £5.00.  A Long Black Coffee (£2.80) was my choice of beverage this time and was perfect.  The apples were prepared to order so the dish took a minute or two to arrive, but was absolutely delicious. The fruit was done to perfection, with the apples being cooked through but not mushy, and the cream was not like anything I have had before. Chantilly cream is usually drip white and squirted onto the dish to aerate it but this was of a creamier colour and texture and had been hand whisked to get the air into it.  The flavour was spot on. 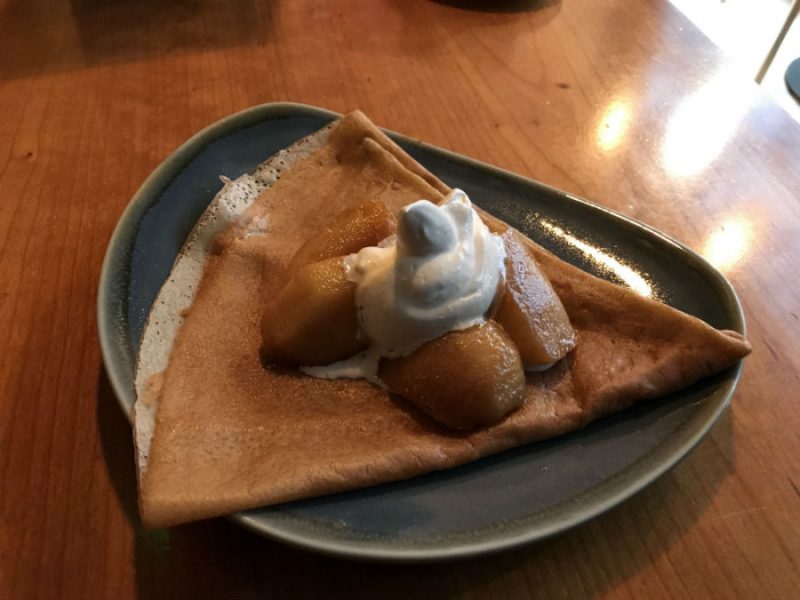 When I had finished my meal I introduced myself to Joe, the owner, who travelled to Normandy some years ago in order to learn how to make the dishes properly. After some time away from catering, he got the bug again and bought a cargo bike, hence the name, from which to sell his crêpes as street food.  He can still be engaged to do this now. Items from the menu can be ordered to take away as well as to eat in.  I enquired as to why the cafe is only open Wednesday to Saturday 10.00am-5.00pm and he told me that there were still behind the scenes jobs to do in connection with the place, but he felt it was better to open for a limited number of hours initially and work up to seven days a week. 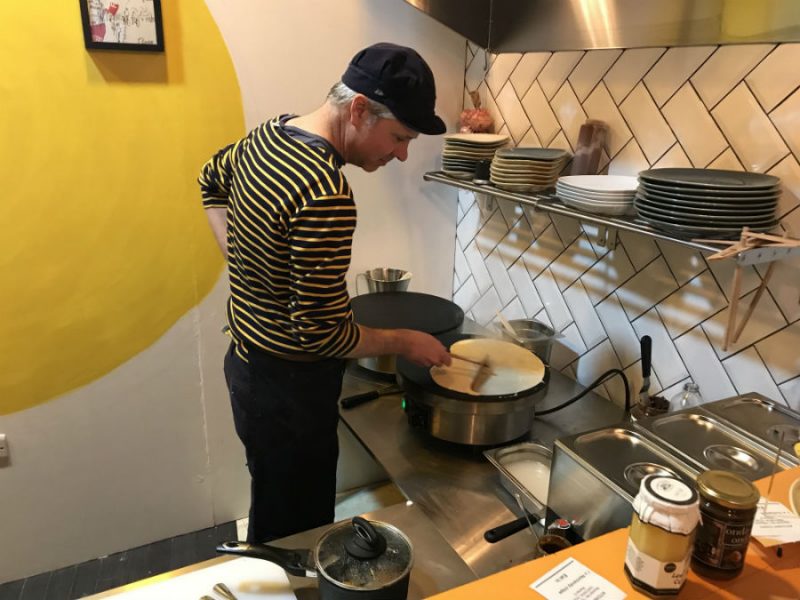 Having turned my day from disaster to delight, I realised that things always get better as encapsulated in that old saying ‘Crêpe Happens!’