Let’s Do Lunch at Harlie’s

I’ve been meaning to do a review of Harlie’s for ages but, as it’s situated at the back of the Corn Exchange, it’s not somewhere which I pass regularly and so time has gone on and no visit been made.

I was writing about an event for the Leeds Lit Festival recently, which was a Poetry Ghost Walk around the City and, after a chilling tale of child murder and haunting, we emerged from a Victorian alley past the aforementioned eatery. The reminder was stored in my somewhat shaky memory bank until I made the withdrawal earlier this week.

This was one of those times when procrastination was not the proverbial thief of time, but quite the contrary. It seems that Harlie’s closed down for eight months and has just reopened under the ownership of a couple of the previous staff members, and is now back ready for business. Reopening a restaurant must be a difficult job, because you have to attract new customers like any other place, but your erstwhile regulars will have found somewhere else to go during the period it was ‘dark’ and probably still think that it is shut, whilst  those who didn’t like it before will assume that it is still as bad, thus avoiding going. In this case, that would be tragic as Harlie’s is a bit of a gem.

The first thing to be said is that the burgers are beautifully presented, but won’t draw many whoops and hollers from your Instagram followers as they are back to basics jobs filled with the ingredients listed on the menu rather than being loaded up with lots of salad.  This means that you can pick them up and consume them as they were originally intended rather than have the contents ooze out of the opposite side to the one on which you are biting, thus leaving your skirt, shirt and trousers looking like a Jackson Pollock painting. You can add another patty if you so wish for a ridiculously small supplement of £2.50 but I decided to stick with the one; a great decision, as it later turned out.

I would normally continue with a description of the food here and leave the comments on the service until last but I simply cannot do that here. According to my receipt, I was served by Olivia who managed to give the empty room a bagful of atmosphere by being chirpy without being cheeky and bubbly without that annoying over-the-top attitude that makes you skip to the next person when you see it on a dating site profile. I had perused the outside menu before going in and settled on the Kentuckian which, not surprisingly, was chicken based. My friends who live in Lexington hate being associated with KFC; they don’t mind the blue grass, horse racing and bourbon aspects, which is probably why we like each other, but hate the Colonel.

Anyway, when I looked puzzled as to the absence of this particular version on the interior menu, Olivia asked me if I was having a problem.  When I explained she told me that the outside menu was still the old version but that if I told her which one I wanted she would see if they could make it from the ingredients in the kitchen. I declined this very unexpected offer and went for the Californian because it is no use reviewing something which is no longer on general sale (read my test drive of the Model-T Ford). The dish was described as being ‘Handcrafted beef patty, smashed avocado, a fried egg in a toasted brioche bun’ £5.95. I added a portion of seasoned fries for £1.95 and a bottle of Corona beer £3.75. Olivia asked me what sauces I would like and I stuck at ketchup. I was asked to take a seat and she brought the food when it was ready. It did take a few minutes longer to arrive that I thought it would but this is because the burgers are all cooked to order so have not been kept warm for any length of time and gone soggy in the interim. 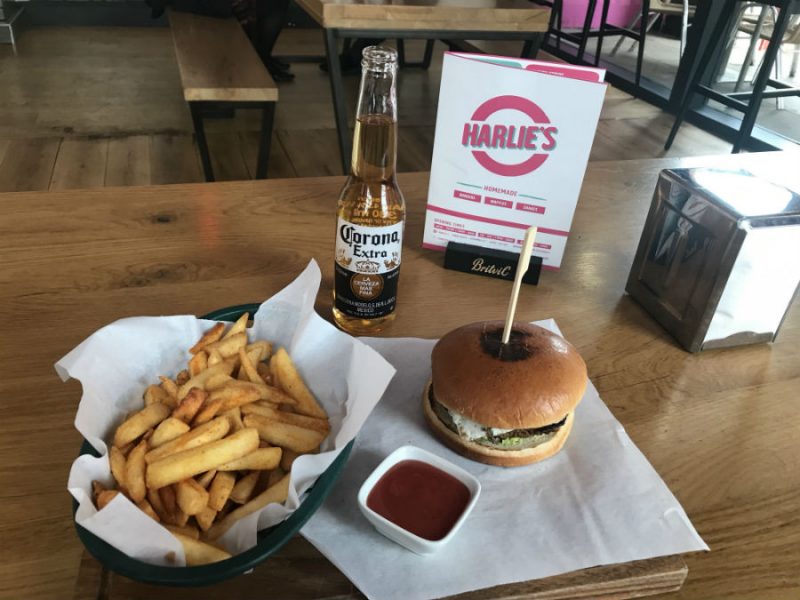 The burger was served on a wooden board covered in paper and the fries were in a basket, similarly lined. Because there were only the three ingredients in the bun, a large wooden stake piercing the centre of the bun was a bit superfluous but better safe than sorry. I began, like you do, by picking up a fry and dipping it in the ketchup – and it was the best piece of fried potato I have had for a while. I recently wrote of some fries that they were thicker than the usual ones in burger joints but not as thick as chips. These were very similar, with the exception that these were perfectly cooked, crisp on the outside and soft on the middle. The portion was on the large side, so if you come as a twosome I suggest that you order one lot to share.

It was time for the burger to show me what it was made of and I couldn’t have hoped for more. The thick versions of burgers have a lot to be said for them, in fact that is what I make for myself, but they have to be on the rare side which they rarely are – sorry. This one had the beef more compacted which gave it a chewy texture, not a bad thing, and the taste was spot on. The meat had been seasoned just right and so, whilst not the thickest in the world, was filling enough for lunch. The egg was fried with the yolk not runny enough to drip down your front but not totally solid either, and the avocado was, well, avocado. I enjoyed both the taste and the ability to pick the brioche bun up to eat it. This was great value for money.

Because of the quantity of fries, my appetite was just about sated. It would not have been except that the trouble with fries is that you eat the long ones dipped in the ketchup but when you tell yourself that you will leave the rest because you have had enough, you invariably notice that the basket is full of the deep-fried bits which are small and crunchy like crisps and so who is strong enough to leave those – not me!  Putting my professionalism before my well being I had another look at the menu where, although there were no desserts listed, there was a section devoted to waffles, so I thought that they would do. 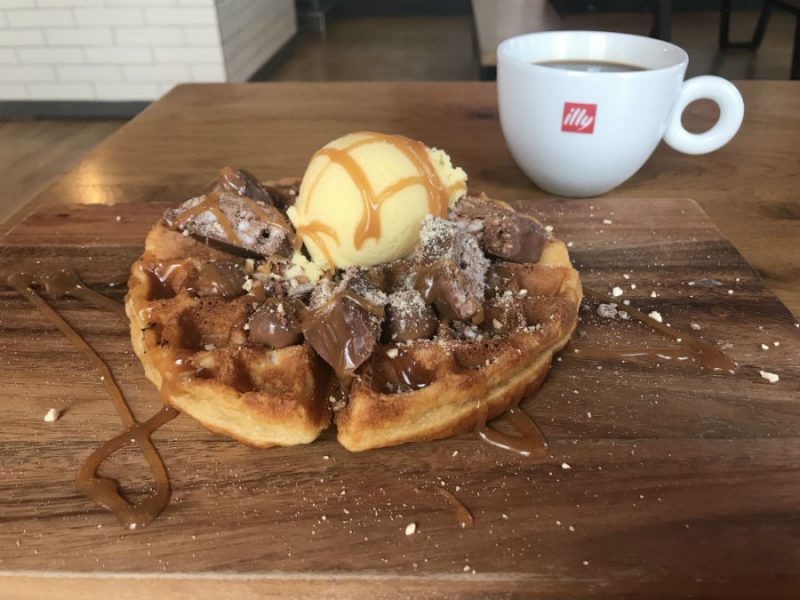 They come in single, double and triple options so I stuck at single and then asked for the Billionaire Boys Club topping, i.e. Salted caramel sauce, Maltesers and Toffee Crisp Pieces.  Come on, what is not to like there. A steal at £4.95 , so much so that a scoop of Madagascan Vanilla Ice Cream was added at £1.50. When I mentioned to Olivia that there were no desserts on the menu she offered to turn the waffles into an ice cream sundae should I prefer. Again, I stuck to the menu. Once more the presentation was great and this one will go down well on social media; it also went down well when eaten. I love the contrast between hot and cold sweets and this was just right.

After a black americano I attempted to stand up and make my way to an afternoon appointment.  Fortunately, it was quite a way out of town so I managed to walk off some of the excess calories but when I got home my fridge remained closed for the rest of the night.

In conclusion, I would urge old customers of Harvie’s to note that it has reopened and, if you were a regular, get back down there.  If you didn’t like it before, give it another try and if you have never been before, what are you waiting for?