Let’s Do Lunch at Mans Market

I set off to Leeds with a specific establishment in my sights but when I arrived I found to my surprise that they don’t have a restaurant, just a bar, so that was that. I took a stroll around the business area of the City but nothing screamed out at me.

The problem was that I was looking for something fairly substantial as I was going away for a few days’ holiday, sorry, research, the following day and I figured that if I ate big at lunchtime I could get away with a sarnie later on, thus saving cooking and washing-up. As I was going to Istanbul, the prospect of Mediterranean food didn’t appeal. By the time I had stopped dredging my memory for likely places I had reached Wellington Street and then it hit me: Man’s Market in West Point. I have read about this place for ages and always meant to give it a try so what better opportunity could there be.

Man’s Market is a Chinese restaurant of the Hong Kong variety situated in the Whitehall Road end of West Point. Entering the establishment felt like going into a sleazy cellar in the Orient and I fully expected to see a high stakes Ma Jong game going on with a group of opium smoking old men huddled round a table in the corner. The lighting was very subdued, the effect of which was accentuated by my reactolite glasses being darkened by the bright sunshine outside. Once past the bar, the lighting improved, as did my glasses, and I was greeted by a young man who told me to choose any table and he would bring me a menu. Fortunately my premonition was wrong and it proved to be a shabby chic room, sans gamblers or smokers, so I had no reservations about my fellow diners. 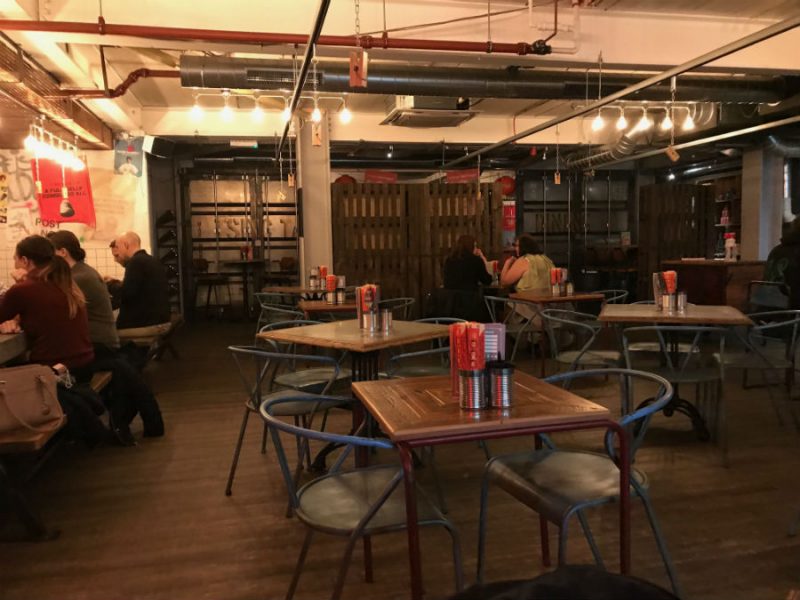 I was still removing my jacket when the waiter arrived with the bill of fare and asked me if I had eaten there before. I responded in the negative so he went through the procedure with me. There are three cards on the table, each bearing a different legend. The first one, which also doubles as the drinks menu says ‘I’m Thirsty’, the second ‘Feed Me’, and the third ‘I Wanna Go’. The idea is that you write what you wish to order on the back of the appropriate card and then clip it to a rope suspended above the table to attract the waiting staff who take your order to the kitchen. When you want to pay the ‘I Wanna Go’ is suspended and the bill arrives, I mean the invoice, not the police, unless you are threatening to leave without paying I suppose. I enquired as to whether there was a sign to say that I wanted to go to the toilet which produced a laugh and an apology for detaining me. The waiter asked if I wanted a Prawn Cracker, which I did, and it was awaiting me on my return. I was mulling over the choice of words whilst washing my hands, as I have never been served a single prawn cracker before. I have now. It was enormous and came with a chilli dip. Unlike some of the small versions, this one had quite a kick of fish flavour and went well with the dip.

The menu is split into different sections and there were two options for lunch. The first was the Box and Beer section and the second the Express lunch comprising the former but with the addition of a Dim Sum plate. I opted to go for the Express Lunch. From the Box and Beer Section where there is a choice of eight dishes, all at £6.50 and including a 330cl Tsingtao beer.  I chose Roast Duck with Char Siu upgrading to egg fried rice from boiled rice for 50p. Noodles were an extra £1. Even though I was eating in the restaurant the food came in a box with a groovy handle on the side, and whilst cute, it was unfortunately not very photogenic so I apologise for that. I buy food to eat rather than photograph, and this was excellent. There were three pieces of duck which had been coated in soy sauce and roasted until extremely tender.  They were absolutely delicious, as were the three pieces of char siu which were braised caramelised pork in a batter. The meats were on a bed of vegetables and the aforementioned egg fried rice. At £7.00 this was an absolute bargain in itself but when the Dim Sum plate of Pork War Tip Dumplings were added at £3.45 it was an absolute steal. The Dim Sum had been steamed and then deep fried which gave them a wonderful texture but were delivered some time after the box and I was pretty full by the time they came ,so dessert, which seemed to comprise solely of ice cream, was out of the question.

I have no hesitation in recommending Man’s Market to everyone but with one caveat. When I was asked if I wanted a prawn cracker before having looked at the menu, I assumed that it was complimentary, as are popadoms in some Indian restaurants, but when the bill arrived £1.00 had been added for it. When I arrived home I looked at the menu and the prawn cracker was indeed listed at £1.00, but it would have been better had this been made clear when I agreed to one. It is not the price, as it was well worth it; it is the principle.

Be aware that the opening hours for lunch are noon until 2.00pm Monday to Thursday. On Friday and Saturday Mans is open noon to midnight, although it is not made clear on the menu what constitutes ‘lunchtime’ on those two days.