Let’s Do Lunch at Pho

I have been meaning to call at Pho – pronounced Fuh – for quite some time now, but I always seem to get diverted.

Because of other stuff I had to do in this part of Leeds, today seemed the perfect time to put on my blinkers and call in. I have eaten here before but it was in the dim and distant past before I began writing reviews so, as I had enjoyed my first visit, I hoped that it had not changed very much. I need not have worried; the place looked exactly the same right down to the broad smile which greets you when you order.

Pho, the restaurant, is one of the original permanent occupants of Trinity Kitchen and has obviously got something right as it still attracts queues of people to sample its wares. Pho, the dish, is Vietnamese Noodle Soup and, as you would expect, is their speciality. There are lots of other South-East Asian street dishes on offer, such as Pho Xao, Com Tam and Bun, and don’t worry if you are not familiar with the names as the menu contains descriptions of what they are and the ingredients used. There is a selection of Starters and Small Plates should you fancy a tapas-style experience, and Vietnamese Salads by way of contrast.

The idea, as with most of the other permanent eateries in Trinity Kitchen, is that you order at the counter where you are given a pager which illuminates and vibrates when your meal is ready to collect. I like this system as it suggests that the food is cooked to order and not ladled out of a bain-marie where it has lain for some time. Although you can take any meal from any outlet and eat it anywhere in the communal seating area, Pho is designed to suggest that the food be eaten in its confines and that is what seemed to happen, with everyone chomping on noodles and rice with only the odd burger or taco in evidence.

I took my place in the queue and ordered a starter of Tender Fried Baby Squid with a salt, pepper and lime dip at £5.75, and a Pho from the House Specials section, the King Prawn and Steak Special containing king prawns, chicken and flash fried steak with garlic in beef broth for £8.95.  To save queuing twice I ordered them both at the same time, which was no problem as the Pho was very hot even by the time I got around to eating it, so it must have been nuclear when it was dished up. From the range of soft and alcoholic drinks, I chose a freshly squeezed Apple, mint and lime juice with the optional ginger (£2.95). Yes, you did read that correctly – there were beers and wines available but I had juice. I must go for a lie down later. 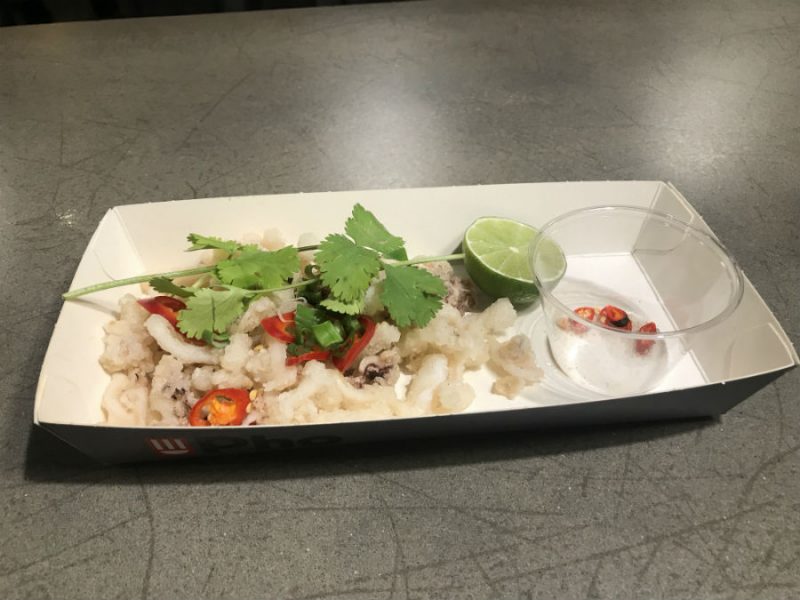 As I have discovered in the past, dining alone at one of the communal tables can be a bit of a problem if they are busy as, when you get back from collecting your food, someone else has snaffled your seat, but fortunately it wasn’t too crowded when I went and a lovely couple seated nearby offered to keep my place for me. On my return, I set about eating my food.

Both of the dishes I had ordered involved a bit of culinary effort on my part. The salt, pepper and lime dip for the squid needed to be mixed in a small plastic pot. This is a great idea as the pepper part was red chillies, so you can make it as hot or not as you like. I squeezed the lime over the salt and chillies and began to tuck in. There was also a sprig of coriander to take or leave as you wish. The squid was perfectly cooked and very tender, with its batter being crisp yet melting in the mouth. The added umph of the dip was not really needed but I had a few dunks amongst the ones I ate au naturel.

The Pho itself, although clear, was bursting with flavour but even this could be enhanced by the addition of extra herbs provided in a paper tray to add, or not, as you like. There were the ubiquitous red chillies, lime, bamboo shoots, mint, coriander and galangal, all of which I ripped apart to release the flavours and added. The steak was superb, being tender but not so much so that it disintegrated when I tried to bite it, as were the prawns, which were huge and perfectly done. The chicken did fall apart on eating, but it was no bad thing. There is a danger in soups and stews containing different meats that they all take on the same taste when cooked together, but this was not the case here.  The prawns were as fishy as you would expect but that flavour had not permeated the meats, with the chicken especially tasting as it should and not being there as just another texture. 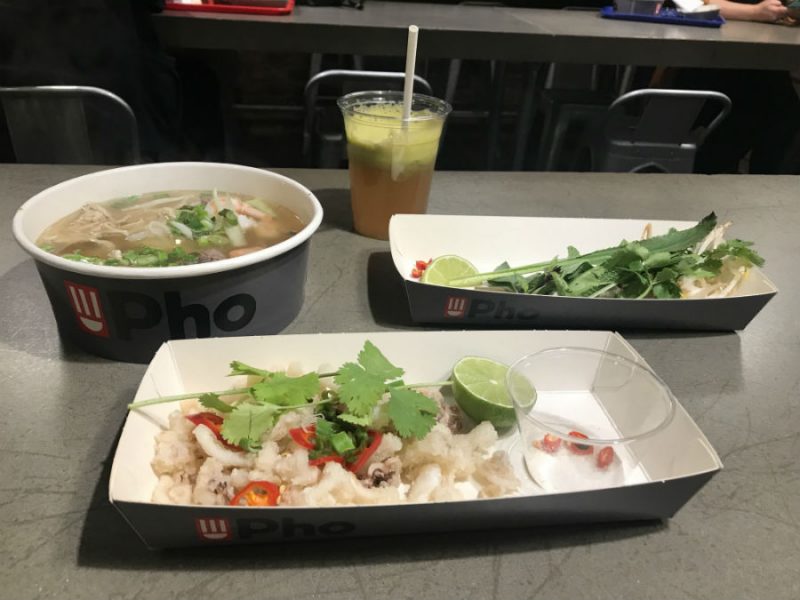 The juice was a perfect complement to the food, with the oriental hint of ginger and lime to link it to the dishes, whilst being supremely refreshing, thanks to the apple and lime again.

It has to be said that this is not the cheapest two-course street food lunch in Leeds, but my goodness it was worth every penny, and far better than a conventional Vietnamese restaurant I recently reviewed, but the Pho was ample in itself without the starter. The setting of Trinity Kitchen also helps create the atmosphere of a busy street and long, communal dining tables make it easy to strike up a conversation with your fellow diners, although sometimes that might not always be an advantage.  Just ask the couple who saved my seat!