I was asked to go and review the first Chow Down event of the season at Piece Hall, Halifax on 1st July so it seemed only right to go to the final one of the year at the end of September.

Both were held in bright sunshine but the temperature at this second visit was several degrees lower than the first. This didn’t deter the good people of Halifax and its environs from turning out in their droves. I thought that the first weekend was well patronised, but there were just as many people, if not more, at this one. The number of stall holders had also increased dramatically.

As the rail workers were on strike and having been stranded by an earlier dispute a couple of weeks before, I  chose to use the bus which took a little longer so, with the sun being well over the yardarm, my first stop was the central bar for some liquid refreshment to accompany me on my quest for something to eat. Regular readers will know that I love a pun and the winner of this week’s original name competition was a stall describing itself as ‘Falafels with a twist’ named Wrapture.

There were far too many outlets to name individually but the layout was such that the site was split into separate sections. I was told that the power supply played a part in this, but whatever the reason it worked very well. There was a row of hot food stalls, a large bar in the centre, the music at one end, a section comprising specialist drinks such as craft beer, gin, prosecco and cocktails, and finally cold foods, including bakeries ,a cheese stall and a charcuterie. Just to make a liar out of me there was an Indian outlet selling hot food in this section but they seemed to be using their own gas bottles rather than the communal electric supply.

Despite attending a lot of street food events this summer I had not come across a lot of the stalls before. Not surprising in one case as it was their first venture, having a shop just next door to Piece Hall, so they stepped in at the last minute when one of the original stall holders pulled out. 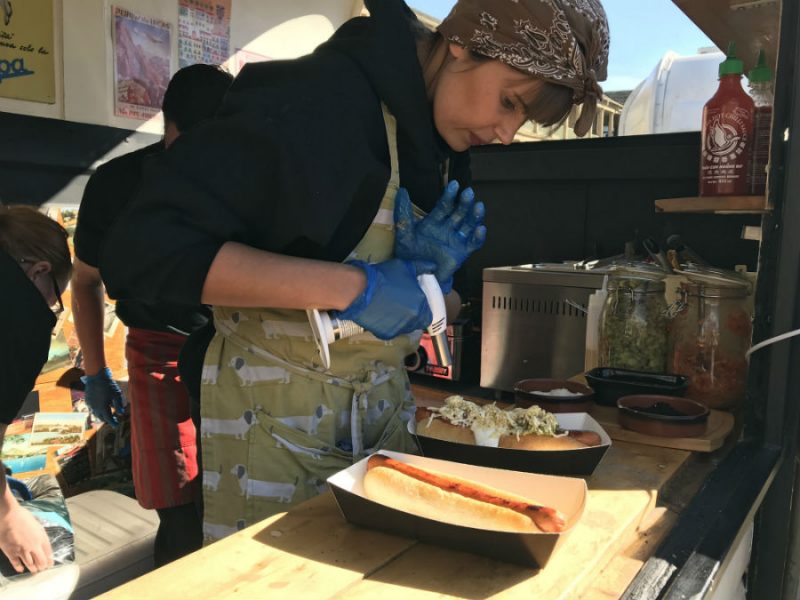 By this time my liquid companion was steadily deserting me so I decided to replace it after getting some food. My choice was Sausagebox which sold a small but inventive range of up-market hot dogs. I opted for the Mexicano, a ‘Classic Pork Hotdog loaded with home-made salsa, guacamole, sour cream, blow torched mozzarella, crushed nachos and jalapeños served in a freshly baked brioche roll’. I asked for the whole thing to be topped with a few drops of extra hot chipotle sauce. The result was a work of art. Despite the queue that was building up, the construction of the hotdog was meticulously done without rush or fluster, and it was a pleasure to watch. It was even more of a pleasure to eat as, although fairly long, the roll did not disintegrate and my hands and clothing came through the meal unscathed. The top quality ingredients were added in separate sections rather than piled one on the other, so you could eat from both ends to achieve different flavour combinations. A great seven quids’ worth. 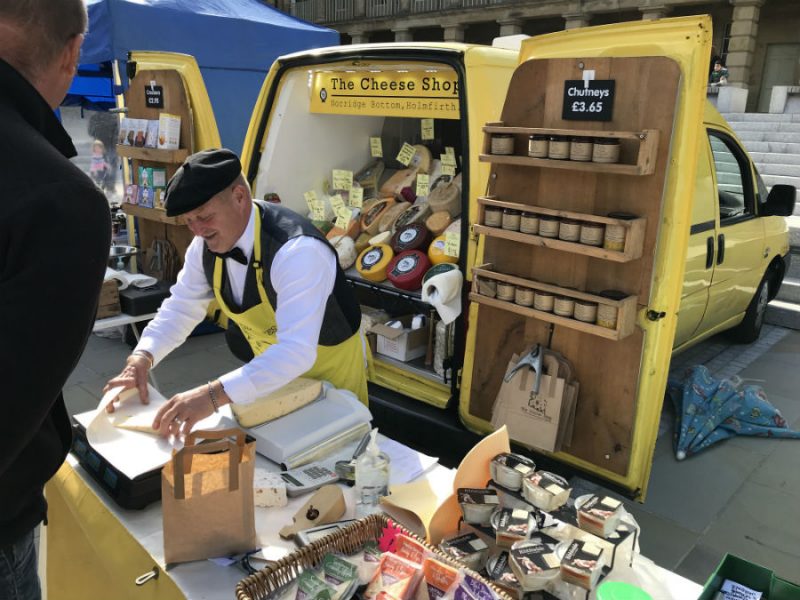 Now that it has been shown the event is so successful, hopefully Chow Down will become a permanent fixture in the summer calendar for Halifax Piece Hall and continue to attract large numbers of visitors to this iconic building.