Gustav Holst’s presence on concert hall programmes has been in sharp decline ever since the death of his indefatigable champion, daughter Imogen, in 1984. Nowadays, his reputation rests again where it began, over a hundred years ago, with nothing but the massive The Planets Suite finding anything like a regular place. What a refreshing discovery, therefore, to find three of Holst’s minimalist stage works being performed by the enterprising Northern Opera Group as part of Leeds Opera Festival 2021. The shortest, at twenty minutes, The Wandering Scholar, has done the rounds, in both afternoon and evening sessions, at seven separate venues around Leeds in the long Bank Holiday weekend. The other two, still quite short nevertheless, couple for this fascinating and contrasting double-bill.

Sāvitri is the product of a preoccupying fascination with Sanskrit, which Holst embraced in his early thirties. He even enrolled for a course at University College, London, to learn the language. The chamber opera bears the composer’s own English translation as libretto, based on a philosophical episode from the epic Mahābhārata, the “fifth Vega” of ancient India.

Death calls to Sāvitri to claim her husband, the woodman Satyavān. By means of quick-witted flattery – “Welcome, Lord, Thy art called the Just One, Thou rulest all by thy decree” – and guile – literally, deceit over tea in the afternoon – Sāvitri sends him back to his domain unsuccessful in his mission, persuaded that even death is an illusion to mortals such as these.

The opera’s opening, an unaccompanied vocal exchange between Death and Sāvitri, sung in different keys to create an other-worldly effect, is unique in all Opera, I think. Julian Close, as Death, an imperious klaxon basso, whilst commanding our immediate attention, nevertheless adopted perfectly Holst’s requirement that he be “dignified and god-like” and “not in the least frightening or grotesque in the characterisation”. Indeed, leaving his role as the grim reaper aside, taken aback somewhat by his unexpected kindly reception and the novel offer of a civilising cuppa, even in the absence of a complementary biscuit, he showed himself not having yet forgotten all the correct and polite decorum befitting a respectable, well-bred deity.

Soprano Meeta Raval‘s Sāvitri, whether as terrified and vulnerable mortal or quietly measured, proselytising advocate, sang with refreshing clarity and conviction. Her long, impassioned soliloquy, of the prospect of an empty, unfulfilled life without her beloved Satyavān, burned like a verismo furnace at its height, yet she comfortably pierced Holst’s fiery orchestration with her cogent pleading.

Kamil Bien, in the smaller role of husband Satyavān, compensated in acting skills for what his part lacked in note tally. His transitions from caring comforter to defiant, axe-wielding protector to stricken victim were splendidly done. Everyone appeared genuinely happy at his ultimate survival.

Holst wrote for female voices, wordless and off-stage, Neptune-style, initially as Death’s ethereal companions, but, increasingly through the drama’s unfolding, harnessed to the idea of mortality as mere illusion and love as the unfathomable, potent power, alone worthy of guiding us through life. The music was sung beautifully by eight ladies of Northern Opera Group’s chorus.

George Johnson-Leigh‘s staging of exotic, colourful Indian drapes defined the setting beyond doubt, as the presence of a transistor radio did for its location in time. Skipton Camerata, here two flutes, cor anglais and strings, supported with sympathy and enthusiasm at conductor Lewis Gaston‘s clear-sighted, nuanced direction.

At a casual glance, perhaps Sāvitri is a work understandably neglected as still-born in its day, of a modest scale alien to the pre-1914 world of Straussian excess and based, as it was, on an esoteric subject, written by an untried composer of a nationality callow in the art of operatic composition. Performed like this, however, it emerges as a triumph, suitable to pair up with any similarly short, pithy companion piece for an evening’s entertainment … except, perhaps, Holst’s Shakespearean one-act “musical interlude”, At The Boar’s Head …

The fault is not of Northern Opera Group’s making. Emma Black‘s production of Holst’s setting of the amalgamated tavern scenes from both parts of Henry IV moved with pace and purpose. Andrew Slater‘s Falstaff was superb, both in the opening bar-room banter – low notes registering to amusing effect – and the slapstick choreography amidst his irresolute, ale-quaffing companions. His was a portrayal of English history’s first and foremost comic character as one to laugh with, rather than at. The drink cannot totally disguise the fact that occasionally, deep down, he can feel hurt. Vocally, his extended solo about the company’s roguery was delivered with just enough amiable barbs to leave their mark, but broadcast so generally as to injure no-one in particular. Similarly, Joseph Doody‘s Prince Hal and Callie Gaston‘s Mistress Quickly made the most of their solo opportunities. The famous role-play between Hal and Falstaff was performed with panache.

Nor can many failings be laid at the door of the composer. Holst’s adaptation of verbatim Shakespeare involved its ingenious rhythmical coupling to nearly forty separate folk dance melodies, sometimes five interlocked at a time, a remarkable feat of musical scholarly research and contrapuntal technique. It was a bold move on his part to countenance writing a comic opera at all. Such operatic heavyweights as Verdi, Wagner and Puccini, in long and successful careers, only managed one each.

No, blame, if there is, lies with the bard, or rather the changing nature of British comedy over the last four centuries. Patrons at The Globe might have found their long-chained nature hilarious, but modern audiences do not appreciate insults such as, “that trunk of humours, that bolting hutch of beastliness, that swollen parcel of dropsies, that huge bombard of sack, that stuffed cloakbag of guts, that roasted Manningtree ox with the pudding in his belly”, even if our anti-hero is undoubtedly a fat man. If comedy is a rarity in opera, Shakespeare is hardly a barrel of laughs, either. 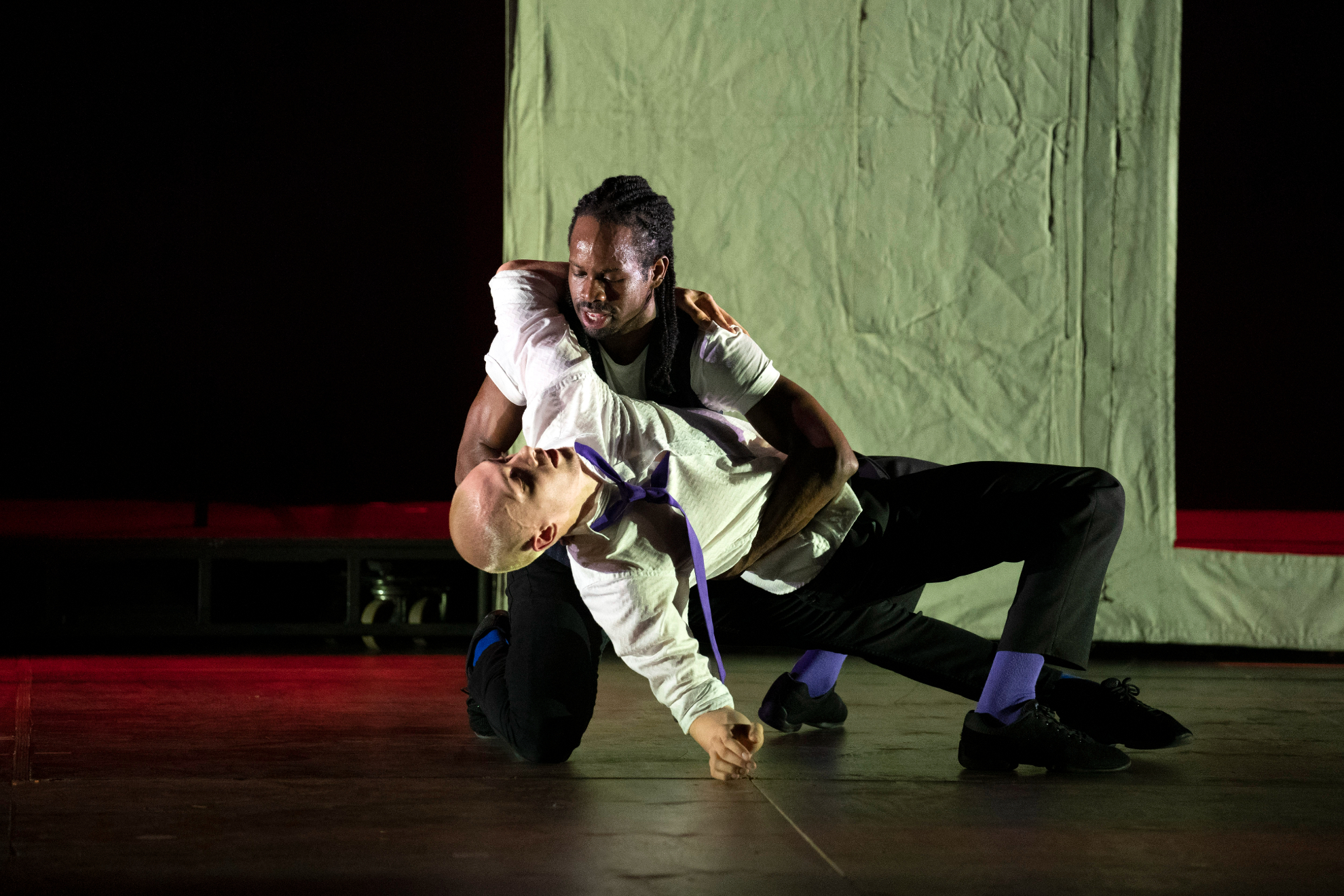 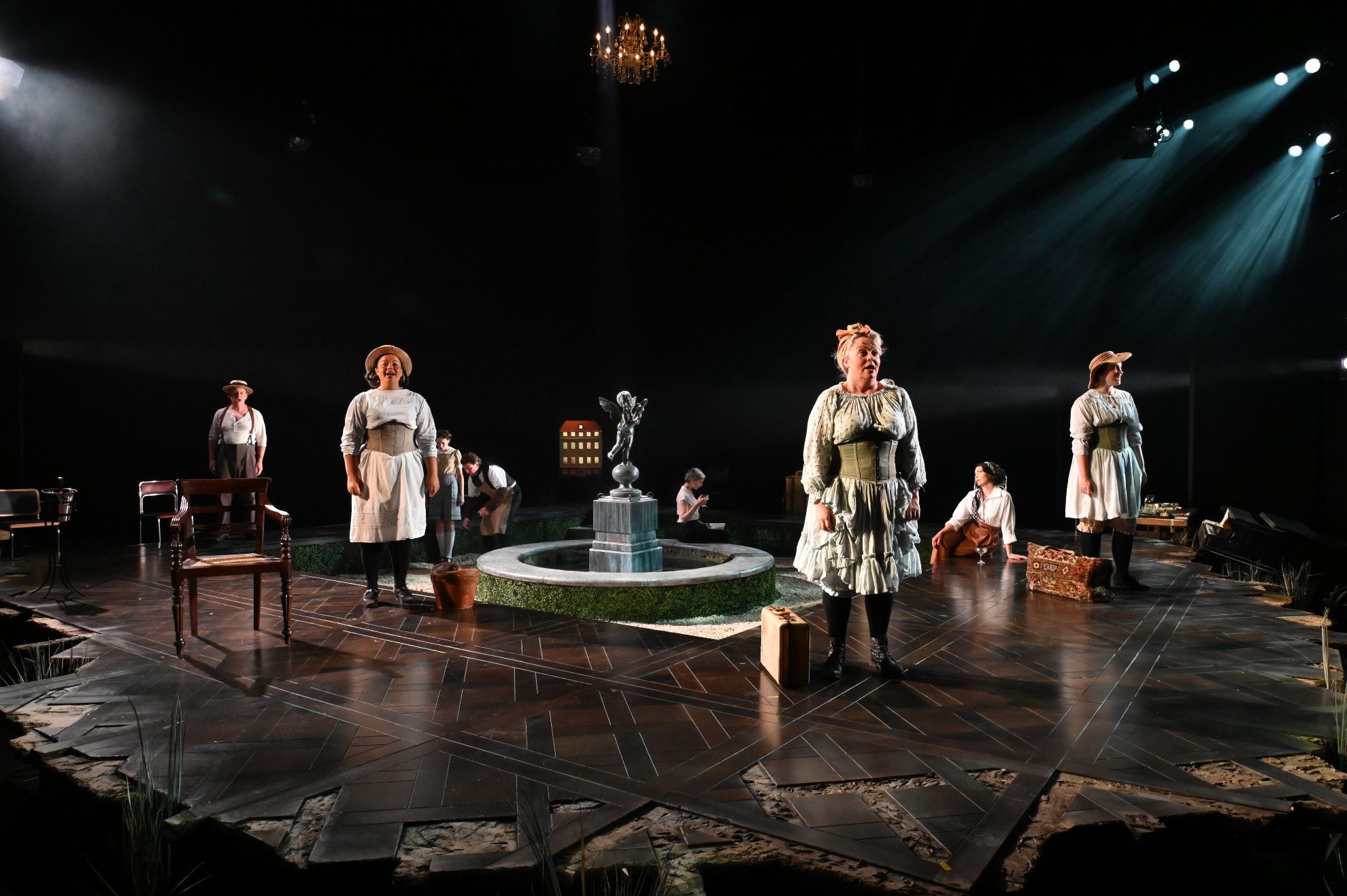