The Swine That Dines on Saturday Lunch-time

As a big foodie, I am always on the lookout for interesting places to eat and today I found one which serves high quality and delicious food at lunch-time.

I went to The Swine that Dines and was absolutely blown away.  The small plate menu was well balanced, with intriguing flavour combinations, and Jo (who co-owns the restaurant with husband Stu and runs front of house) was so friendly and passionate about the ingredients.  This restaurant is a real breath of fresh air and has certainly been added to my top 10 restaurant list for Leeds!

The lunchtime small plate menu at The Swine that Dines is served on a Friday and Saturday between 12 and 3. It is designed to be shared, with 2-3 dishes recommended per person.  As we were visiting as guests, we asked Jo to serve us a selection of her favourite dishes on the current menu.  This helped us out as we couldn’t pick just 6 from those on offer! 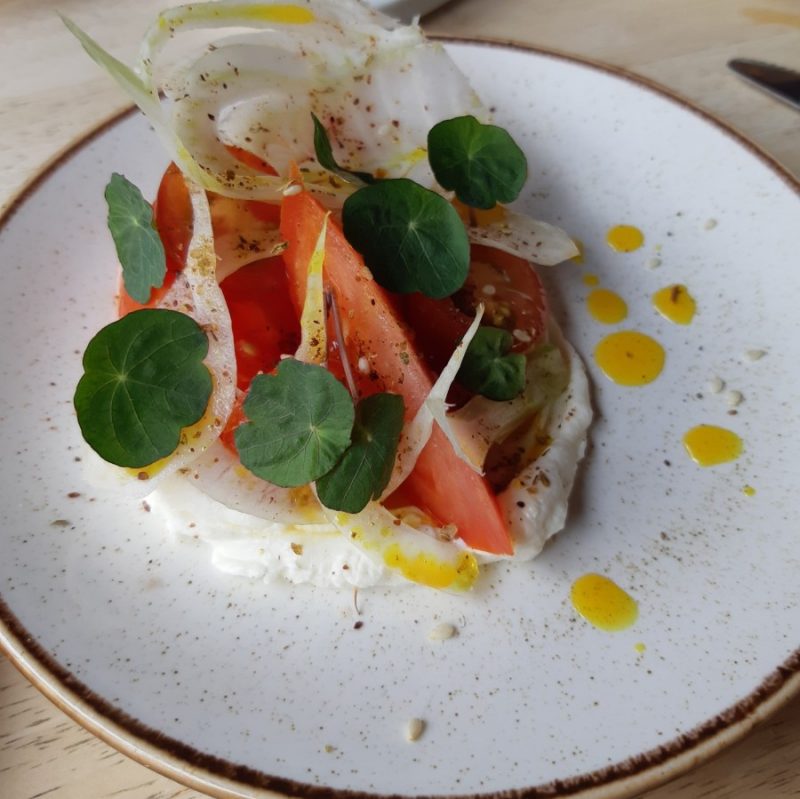 To start, we had a tomato, yoghurt, zaatar and nasturtium salad, which was simple but absolutely packed with flavour. I loved how the acidity of the yoghurt worked with the sweetness of the tomatoes and the smoky flavour of the spices.  Alongside the salad we enjoyed the rabbit terrine with pickles and mustard.  The terrine itself was classically French – with rough-cut chunks of meat and a nice amount of seasoning.  We enjoyed it as a topping on the sourdough bread that we were also served.  The pickles with the terrine were incredible – crunchy, fresh and acidic, cutting through the richness of the meat perfectly.

Next up was the mussels with grilled cucumber, dill and buttermilk. I was slightly apprehensive about this dish as I am not usually a fan of shellfish.  However, my doubts were unfounded as the dish was amazing.  The mussels were served on skewers and had a delicious, lightly spiced and smoky flavour. The grilled cucumber was also a new one for me as I haven’t ever considered eating it cooked. But it was fab – the crunch was still there, but the grilling had given it an interesting smoky edge.  The buttermilk helped to cool the dish and the dill freshened everything up. Absolutely amazing. 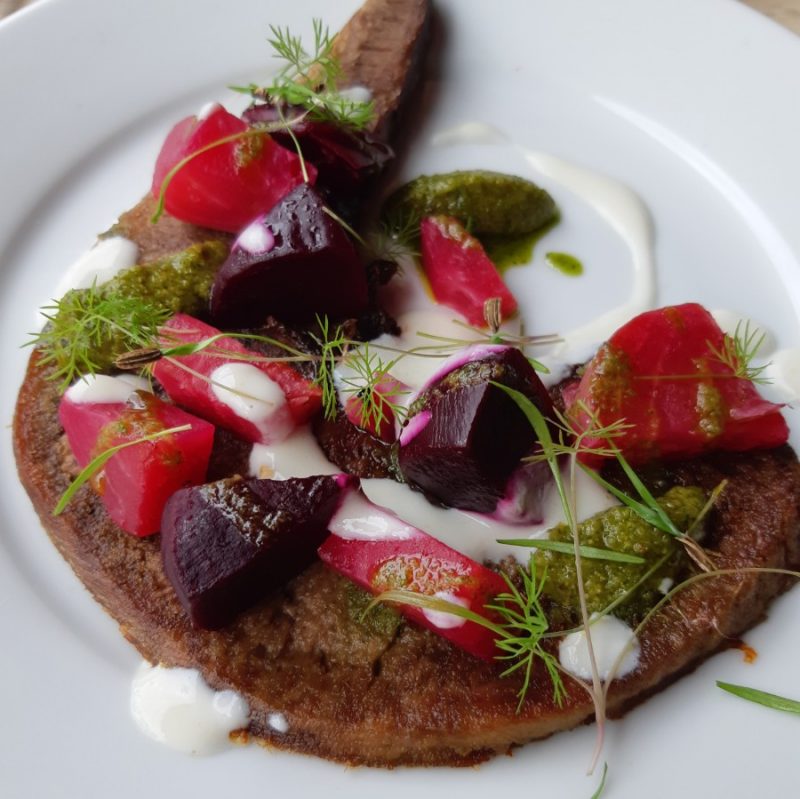 The great thing about small plate menus is that you can try so much food! The next dishes we were served were ox tongue with beets, horseradish and salsa verde, and the mushroom dish with celeriac and black garlic.  The tongue melted in the mouth and the salsa verde added to the rich flavour without detracting from it.  We loved the soft crunch of the beets and the slight heat from the horseradish.  This was a real wow of a dish.  The mushroom bowl was equally interesting and tasty.  I loved the meaty flavour of the mushroom mix and thought the addition of celeriac was inspired.  We both thought that the dish could have benefitted from a sprinkle of roasted hazelnuts, but otherwise it was another faultless dish. 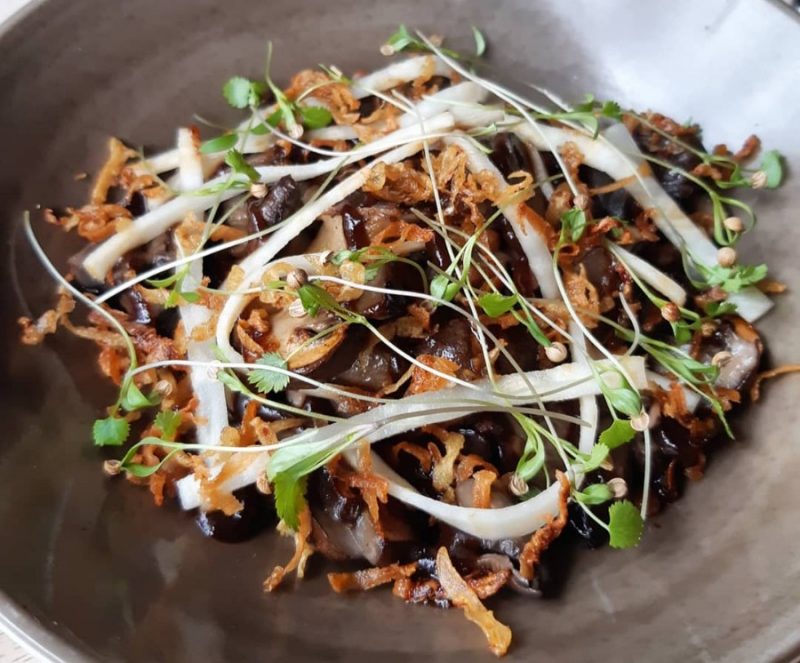 The final savoury dish that we were served was the lamb’s heart with cabbage, barley and cashew.  This was not a dish we would have picked as we were a little apprehensive about eating offal.  However, Jo explained that she and Stu are keen to use all of the animal in their restaurant, not only out of respect but also because the meat tastes great.  Having tried heart and tongue today, we can’t argue!  The meat was so rich and packed with flavour after having been sautéed in cinnamon.  The hummus-like mash was fab – taking the dish, and the diner, to the middle east.  Wow! 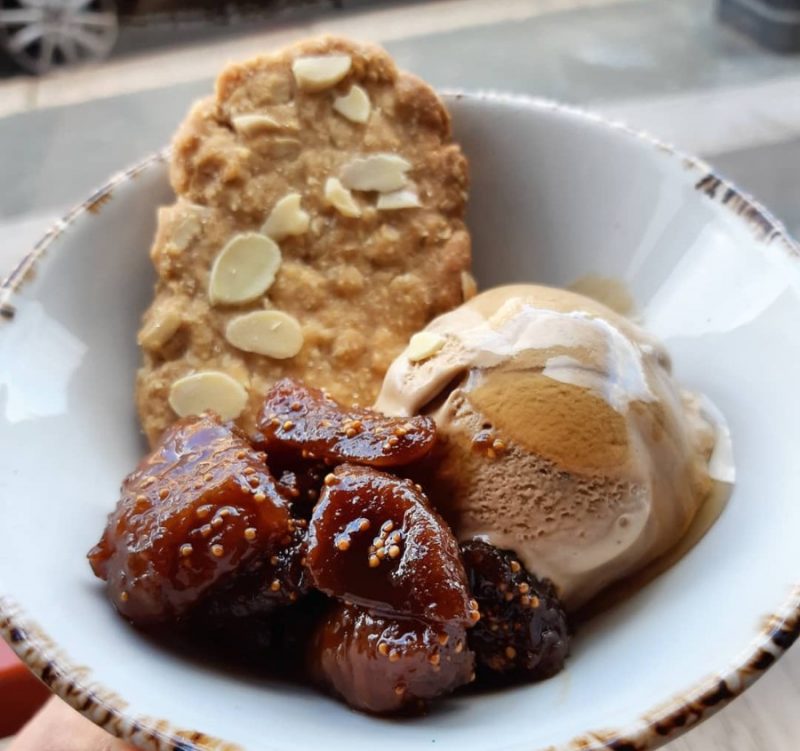 To finish the meal, we opted to try the ‘fig roll and cup of tea’. I have always loved a fig roll, so it was a no brainer for me to want to try this pud.  The dish, which featured tea ice cream, stewed figs and an oat biscuit was sublime.  The tea flavour in the ice cream was incredible; it was so intensely creamy, and the flavours of tea so strong. It worked so well with the warm and sticky figs, and the crunch of the homemade biscuit.  I could eat that dessert over and over again.

Overall, lunch at the Swine that Dines was 10/10.  The food was fabulous, the ingredients were allowed to speak for themselves, with the flavour combinations chosen enhancing the natural taste.  Jo’s service was also lovely – leaving us to enjoy the meal but answering our questions as and when we had them.  I really could not recommend this restaurant highly enough.  I am already looking forward to my next visit!

We recommend that you also read Stan Graham’s Let’s Do Lunch here. 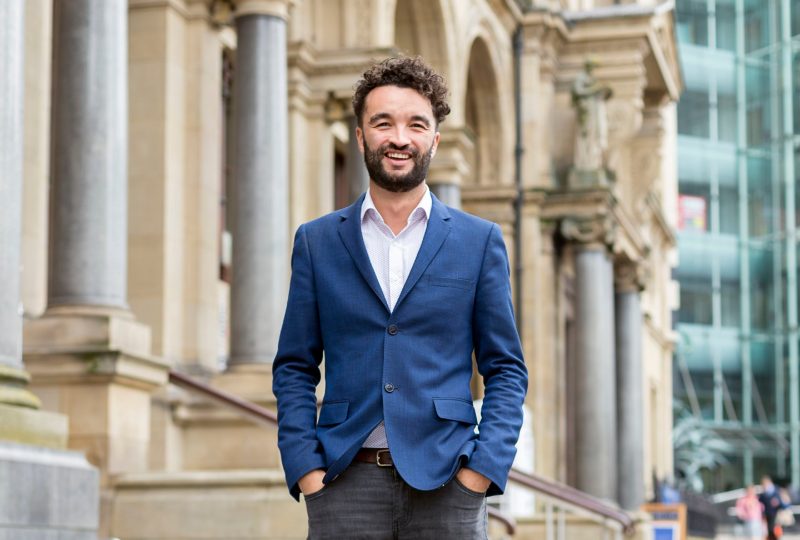 In Conversation With Jordan Odu 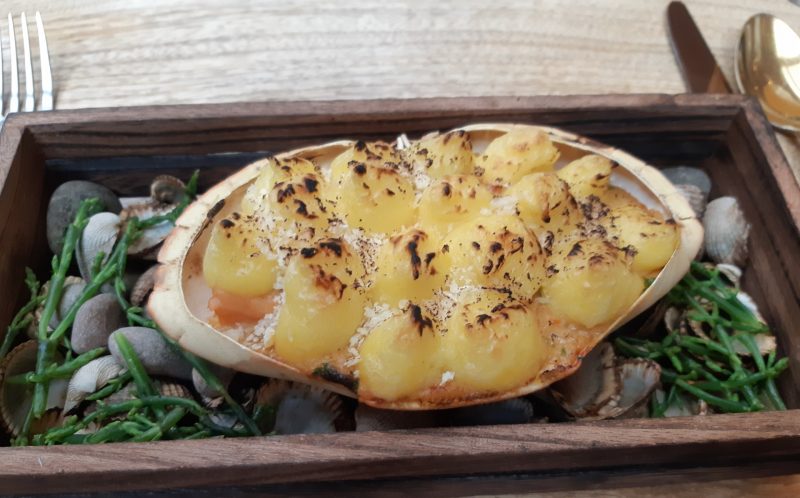 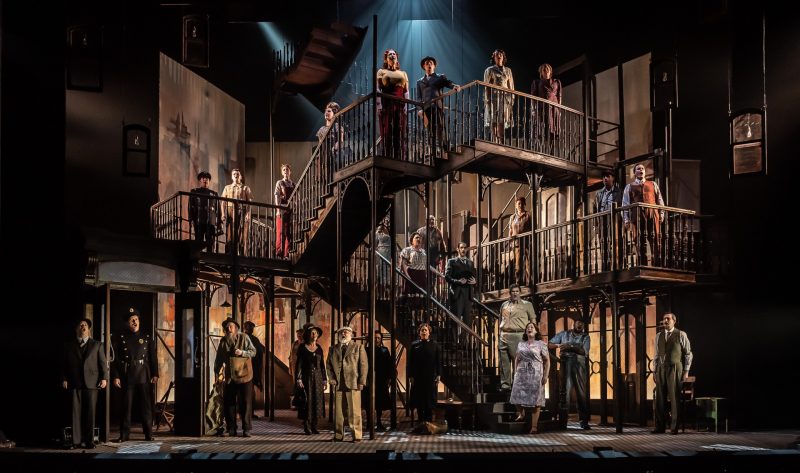