As I walk into Level 1 of Headrow House I see The Big Moon, just finishing their soundcheck, on a beautifully backlit, fog-hazed stage.

Levels sorted, they sound sublime, then clear the stage and head for the green room, smiles all round.  We have a few minutes in there to find out briefly about their lives over the past few years, and the eagerly anticipated release of their second album “Walking Like We Do”, a very well produced album full of charm, character and feeling.  This is perhaps a reality check on life compared with the sparkly message of their debut album “Love In The 4th Dimension”. 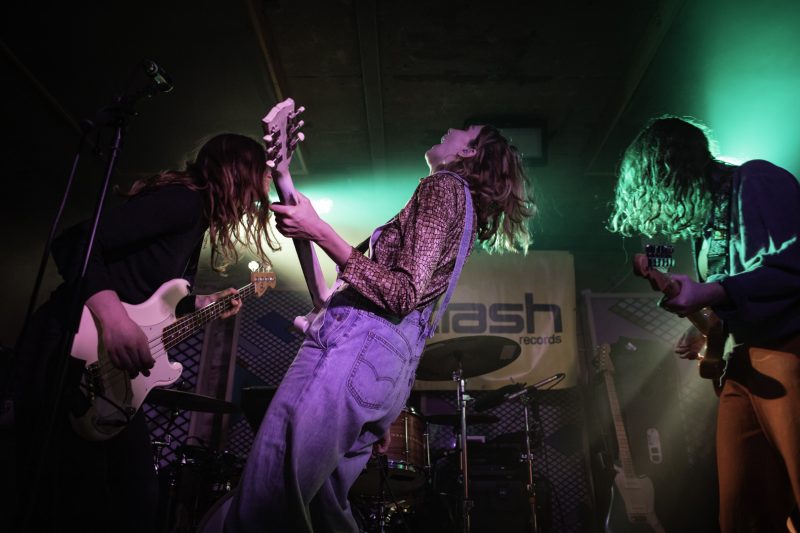 Crash Records is the final stop of their in-store gigs, and from the sound check, it looks like it’s going to be a good one.

The band is relaxed and hospitable, we all say hi and collectively get excited about their supporting Bombay Bicycle Club on 25th Jan at The O2 Academy, “…aw, it’s going to be sooo good!” Jules says in excited anticipation, “YAAAAAAY!!!” yelps Celia.  Before we even start the interview, Jules kindly passes me a beer.  Beers all round, ahhh…this adds much credence to my opening question…

Could you tell when you were here last September that the Leeds crowd absolutely loved you?

Jules: “We feel like we love Leeds.  Yeah, it was with The Pixies; it’s nice to get that love back.  I think The Brudenell (Social Club) is one of my favourite gig venues. I love the vibe of it.  “Live Leeds” was our first ever festival, was so good.”

Soph: “Yeah, and Fern our drummer had lights in her eyes, and she couldn’t really hear that well.  She had no idea how much fun we were having and how great the crowd was.  We came off and we were like THE CROWD WERE AMAZING!”

Poor Fern had to just ‘use the force’?

Jules: “You want another beer?”

Stal: “Yeaaah go on then! 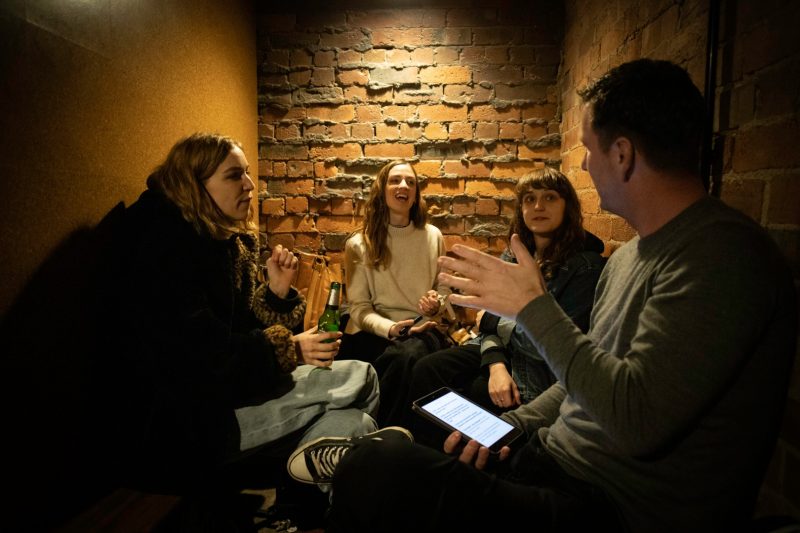 Going back to your first album “Love In The 4th Dimension”, do you still reminisce about writing those beautiful songs, gathering together three amazing musicians and suddenly it’s all happening with absolute chemistry?

Jules: “Do you mean the launch of the album or the start of the band?”

“Yeah, the start of the band.”

Soph: “The luckiness of us!”

Jules: “I think it’s incredible that we managed to start haha!  It’s amazing when anyone manages to start a band, because it takes so much time and effort and money, and you have to really believe in it to actually be prepared to put so much into it.  Soph was commuting from Brighton for rehearsals.”

“Woah, how long was that for?”

Jules: “That’s a looong time, and it’s magical to find a group of people who are all willing to do it and have enough time to do it.”

Celia: “Me and Fern had two other jobs as well.”

Soph: “Was just thinking earlier about how Fern’s got loads of keyboards and SBD stuff (midi control/pro mapping gear/Ableton) now and she loves that side of stuff, but when we found her she just played drums.  We’re really lucky she was up for doing all that; all those things have ended up coming in handy.”

Jules: ” ‘Cause imagine, we’d have had to get another member, another person to persuade to buy into this thing we’re all doing…”

Soph: “Put the rest of their life on hold for.”

Jules: “Yeah, you have to care about each other, and care about what you’re doing.  Can be hard away from home, away from friends.  But it’s also the best job in the world.”

Reading what I’ve read and seeing what I’ve seen media wise, it’s clear to see what you’ve created is genuinely awesome.  With ‘Walking Like We Do’, I just want you to talk me through what it was like heading over to Atlanta to work with Ben Allen, Grammy Award-winning legend.

Soph: “We held his Grammy actually; pretended it was ours for a minute!”

Celia: “Yep, we took a few pictures with that!”

Working with him, his approach is quite different from your typical amazing producer.  What stood out to you with choosing him?

Jules: “We were looking for someone different; he was really confident and really loved our demos – ‘What are these lyrics about!?’.  He was saying ‘You should try this kind of beat’, emailing us ideas before we’d even got to the studio.  He was really passionate about the whole thing.  We needed someone to challenge us because we wanted to make something different, we didn’t want another album sounding the same as our first, there’s just no point haha!  We needed someone who’d be like ‘Why don’t you do this thing or use this machine you’ve never heard of?!’

Celia: “And also you want to bring someone into this thing that you care about more than anything….. you want them to care.  No one will care as much as us, but you want to get someone who cares as much as possible about the thing you’re doing.  It’s a lot of work and it’s just really nice to be in the studio making decisions with someone like that.”

So when you’d put everything down and then you’re in front of the desk mixing everything down, did he take care to listen to the specifics of what you wanted – how did that play out?

Jules: “It was a collaborative thing, a lot of decisions.  You have to be free in that space to say dumb things like ‘Oh let’s just try it 10bpm faster!’ or ‘Why don’t you hit the wall instead of the drum!’.  Ben has a lot of ideas and that’s the luxury of working with him, but in the end we’re making all the decisions.  Like some songs went on a whole journey where they’d start as a thing we’d done in the rehearsal room, and they’d go on this journey with Ben – ‘Could be this, could be this,  could be that, could be that, and it’d come back round to what it was originally.”

Soph: “But you’d pick up bits of ideas along the way that’d make a difference to the final song, so it wasn’t for nothing.”

I’ve played the album a lot.  There’s one lyric that stood out to me that typified the articulation and feeling behind what you’ve written:

and I think I might be playing the hero

but I don’t know the words

and the audience is playing it cool”

That needs to go on a plaque somewhere…

Jules: “Haha, yeah, but I don’t know who that plaque is for!?  Apart from performers, it’s such an indulgent line.”

Well it is and it isn’t.  What were you thinking while writing that?

Jules: “That song’s kind of about getting out of your head, really.  Writing the second album there were times when I was writing the same song again and again.  I was looking for new ways to write, so some ways I did it was by playing piano instead of guitar, I’m not as good on piano, so it’s different shapes; it comes out a different me.  Although like writing lyrics before music, which I never really did before, and with this song (Take A Piece) I was just trying to be someone else, it’s easier to write a song if you’re not putting your own emotions into it.  But of course it comes through the filter of your own life, so it always is partly your own feelings.”

“Thinking about 2019, I can’t think of a better year for you, for two reasons: first, I hear there was a roposal?

Jules: “Ohhhhh yessss, I got engaged.”

Congratulations on that, that’s beautiful.  You got a date set yet?

Jules: “Yeah, and gigging for a bit!”

Celia: “And we’ve got an album to get out first!”

Hehe! Jules, I hear you were proposed to on stage?

Jules: “On stage in front of many thousands of people.”

Did you keep it together?

Jules: “Well, I didn’t know it was going to happen, HE kept it together – remarkably well.  He didn’t tell anyone it was happening. Nobody knew apart from one of his mates, but he was obviously sh*tting his pants!  I didn’t believe what was happening until he got a ring out and I was like ‘Wow! He’s actually proposing to me!’ WOOOOOO!  Because I never really thought he was the marrying kind of guy, and I never thought I was the marrying kind of girl.  But it’s so romantic.  I was like yeah, of course I’ll marry you babe! OBVIOUSLY!”

It’s got to be the loudest cheer for a proposal surely?

Celia: “IT WAS REALLY AMAAAZING!”

Jules: “When we first saw him doing it, I was like ‘Is this actually happening?!”

How far into your set were you?

Jules: “It was a totally beautiful gesture.” 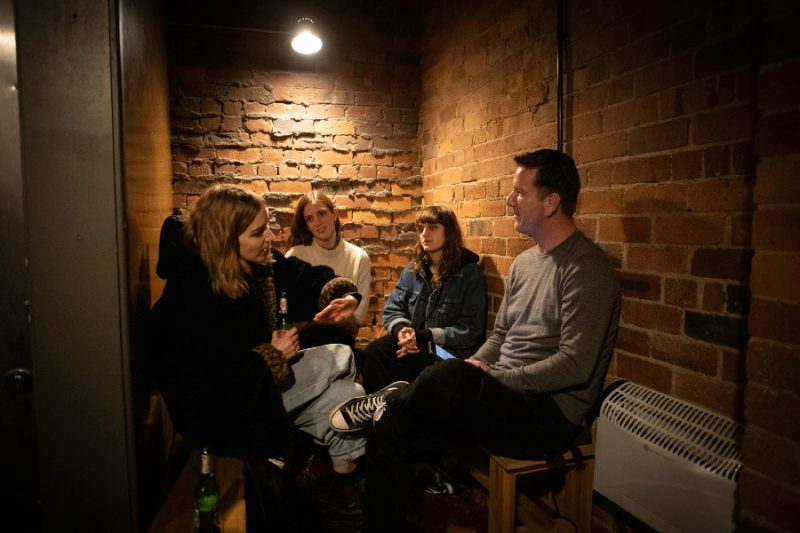 Aw yeah it’s a really heartwarming thing.  So, thinking about touring the UK and Ireland in 2019 with The Pixies, the foundation veterans of alternative music, how was that?

Jules: “We did a lot of watching them play, every night.  They’d released their album (‘Beneath the Eyrie‘), so every night they were going to record stores afterwards to do the signing thing.  They were away a lot.

Celia: “I did have a chat with Joey Santiago and that was the best moment of my life.”

Aw, man, he’s one of my heroes, all-time heroes.

Soph: “They don’t have set lists, they just choose every night what they feel like playing.”

Celia: “Oh yeah ’cause it was in Leeds that they didn’t play ‘Debaser’ and everyone went mental!  It was so funny; we were like oh nooo.  So bold to just do that, they were like, NO, tonight we’re not playing it.  They don’t give a sh*t. It’s amazing; that’s a good lesson.”

Jules: “On tour with them, then doing a headline tour from end of February into March.”

And thankfully you’re back in Leeds on Sat 25th Jan at O2 Academy?

Well it’ll be really good to have you back.  Look forward to that one.  Really enjoyed talking with you all, and see you on the 25th.

The Big Moon are a very cool collective, both sonically and as I found out tonight, socially too.  A very good laugh, articulate and they’re live performance is special; stunning vocals all the way.  Chatting with them felt like more of a casual chat in the bar rather than an interview.  (Yes, the beers helped.)  Shortly after, they performed a brilliant set that lit the crowd right up.  Jules also mentioned there are several more songs taking shape, so while we enjoy album number two “Walking Like We Do”, there’s real confidence in a bright future for The Big Moon. 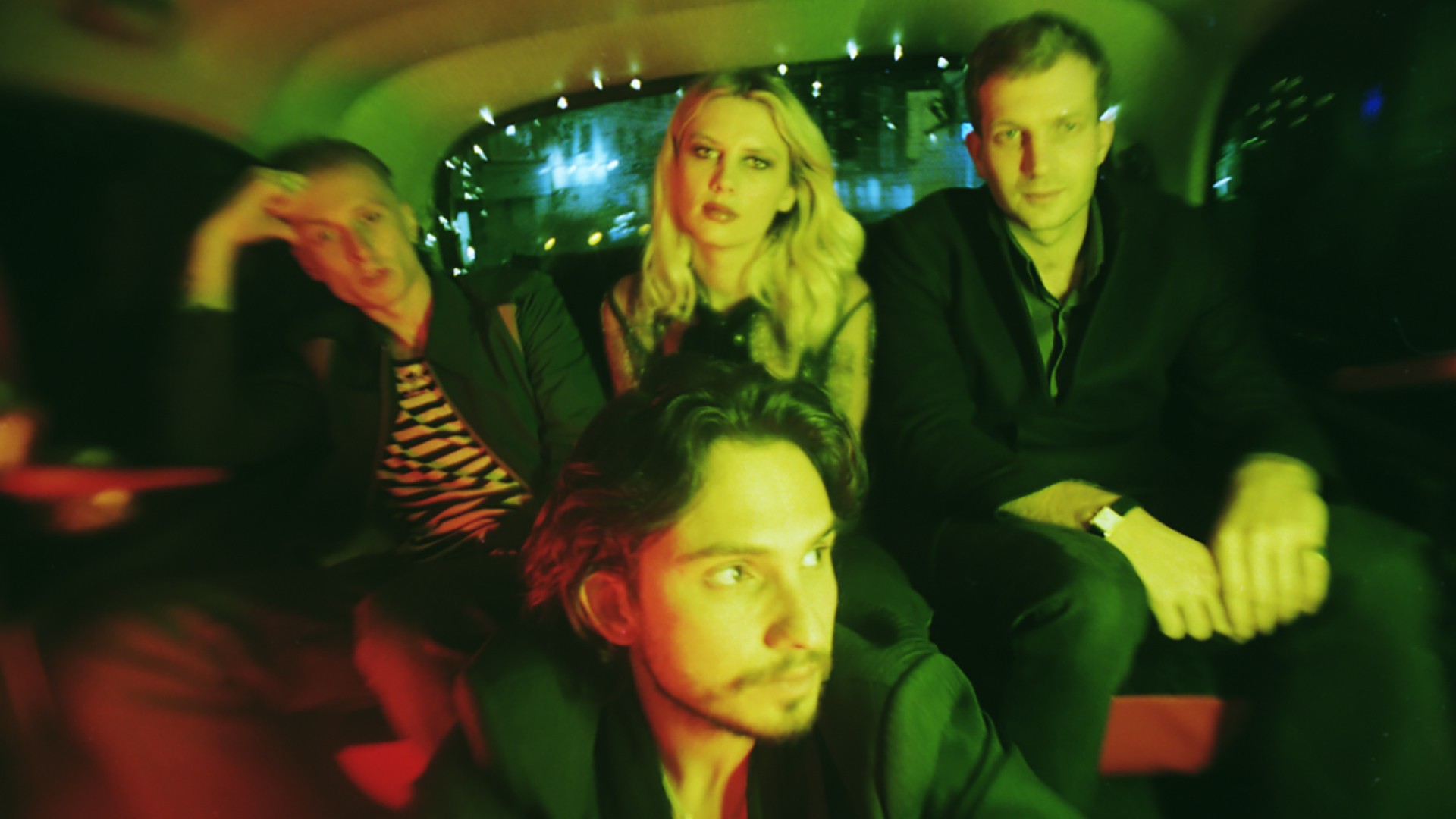 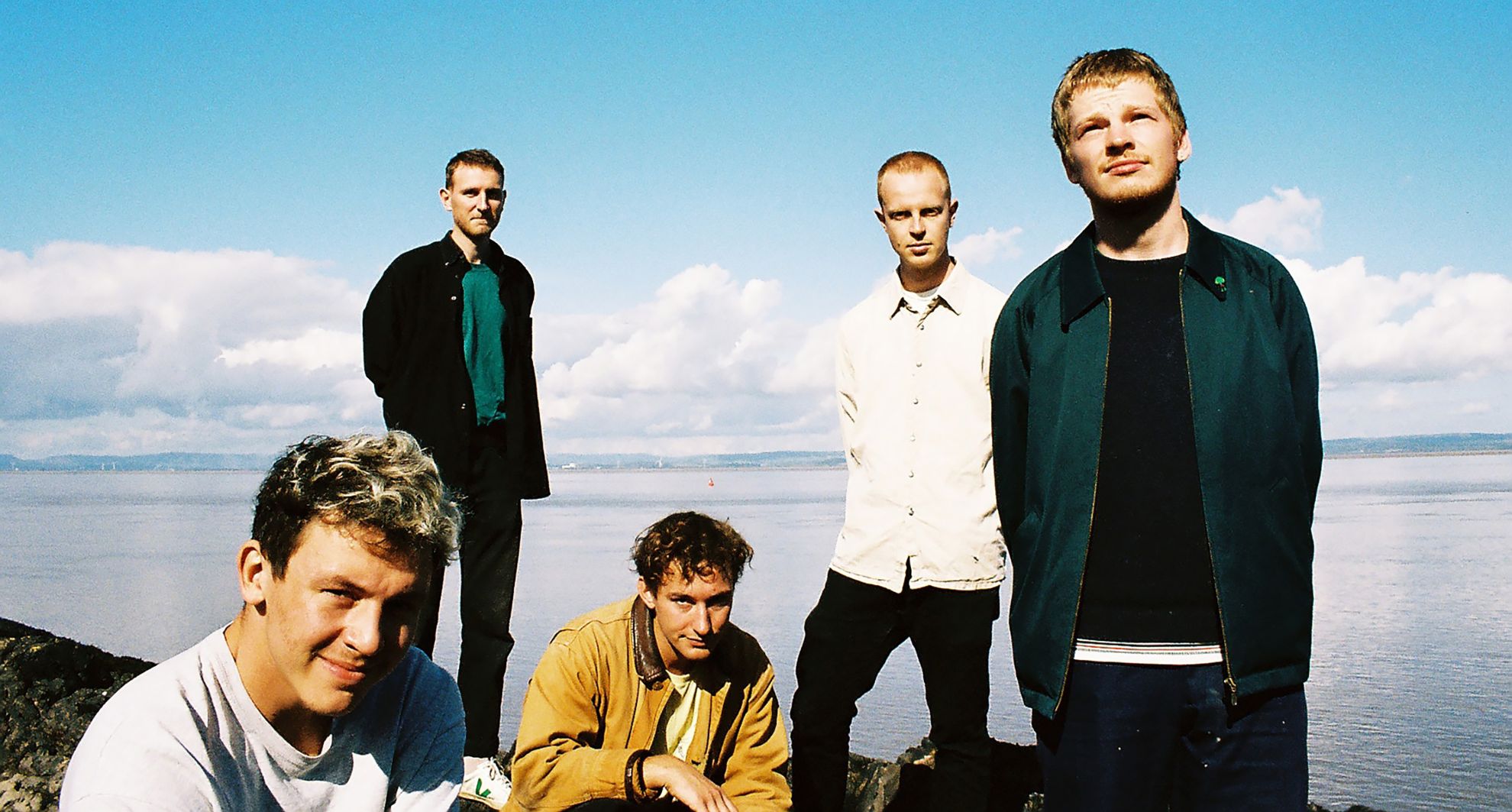 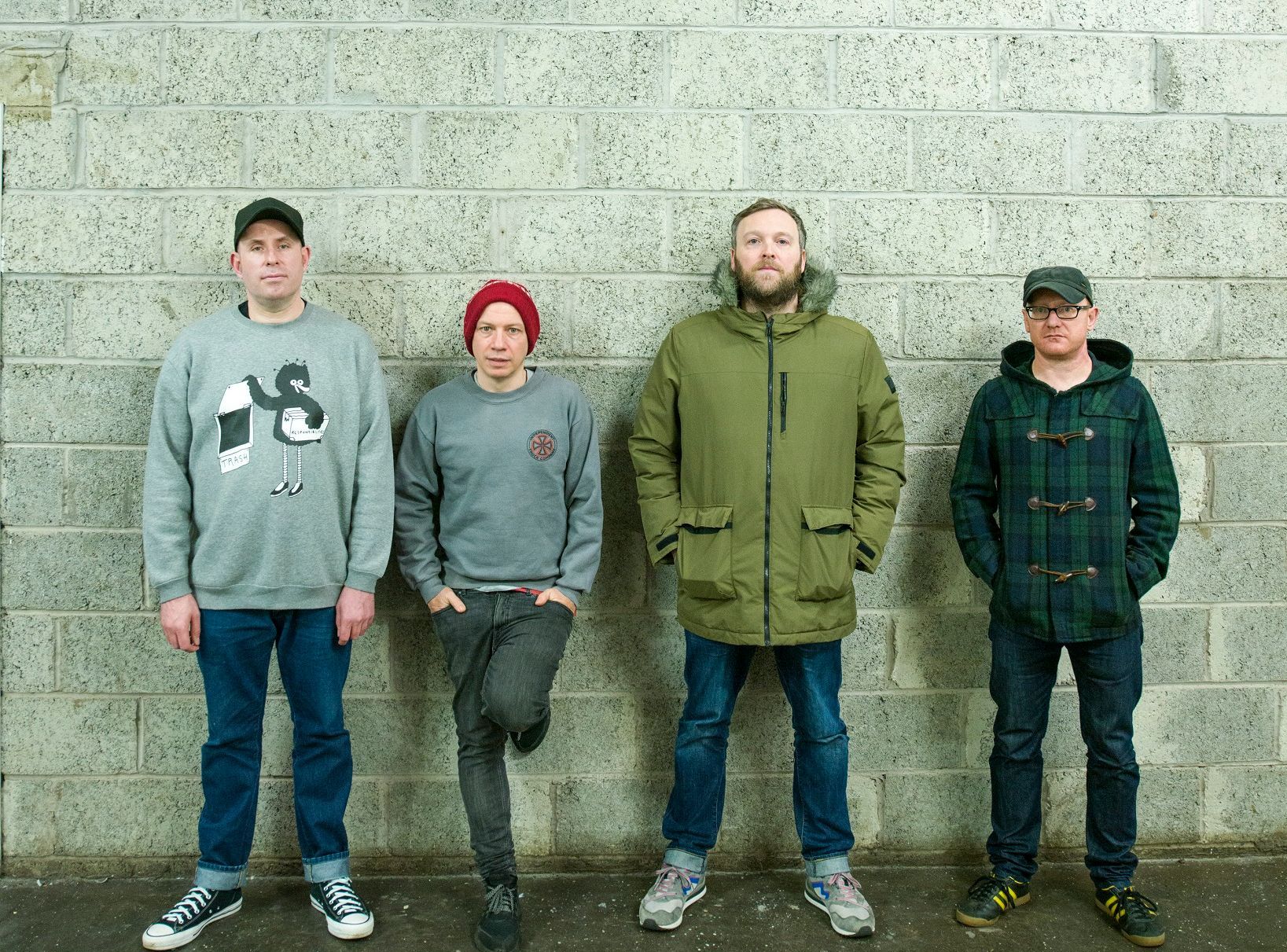