How do you tell the story of a sixty-year long songwriting career in the space of a two and a half hour musical? Answer: you don’t.

You do what the director Marc Bruni has done with the Carole King story ‘Beautiful’.  You narrow the timespan to cover the period from her first song being published in 1958 to the release of the classic album ‘Tapestry’ in 1971, concentrate on the music and stick in a few vignettes along the way. When you have music of this calibre to work with you really cannot go wrong.

For the Millennials among you please bear with me as you will find the story has become very relevant over the past few weeks. There had been female songwriters before Carole King. Heartbreak Hotel was written for Elvis Presley by Mae Axton, but they were very few and far between. The profession of songwriting was a 9-5 job and often done in dedicated tower blocks such as the Brill Building, New York, where songwriters would rent offices in which to work and then pitch their compositions to music publishers who were in the same premises. Others would be on the payroll of the publishers so could not sell their tunes to anyone else. The publisher would then take the song to whichever artist they thought would be able to turn it into a hit.

On other occasions the publisher would instruct the songwriters to write a piece specifically for an artist, usually on a tight deadline. Because of the ’system’, individual writers would often strike up partnerships with other composers, producing some of the most iconic songs of the twentieth century. ‘Beautiful’ has been written to highlight the rivalry between two of these collaborations, Barry Mann and Cynthia Weil against Gerry Goffin and Carole King, as an excuse to utilise their often contrasting material. Both couples ended up getting married and, although the Goffin and King liaison didn’t last more than a few years, Mann and Weil are still going strong together.

In order to stage a successful musical, you need great performers and this production has an embarrassment of talent in that respect. Bronte Barbe as Carol King was excellent, giving an interpretation of the character rather than an impersonation. I must also commend the other three of the main characters: Kane Oliver Parry as Gerry Goffin, Amy Ellen Richardson who played Cynthia Weil and Matthew Gonsalves, Barry Mann. The acting was mainly done for laughs and was from the ‘let’s do the show right here’ school but the singing was superb. Carol Royle as Genie Klein, Carol King’s mother, and Adam Howden who played Donnie Kirshner (the publisher who had the foresight to employ not one, but two female songwriters in this male-dominated trade) were also spot on with their caricature parts.

After the opening, which saw the young Carole King seated at a piano singing one of her later songs, ‘So Far Away’, the set changed and the show turned into a sort of Juke Box Musical with representations of Neil Sedaka, The Drifters, The Shirelles, Little Eva and The Righteous Brothers. Some of these worked better than others. 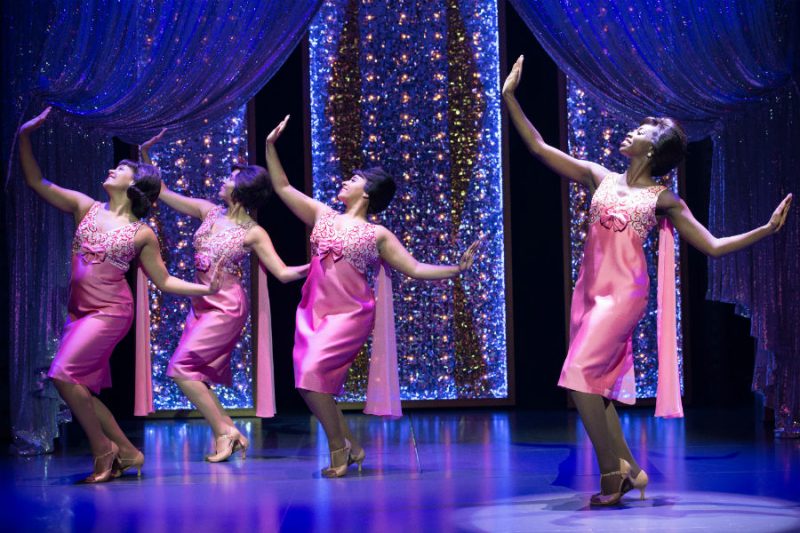 The singing was exemplary from all concerned, even the comedy recreation of Neil Sedaka, who kept popping on to the stage to sing a couple of bars of his songs. He was her first boyfriend and she is the eponymous girl in his song ‘Oh Carol’ (without an ‘e’).  The final number, naturally enough, was ‘Beautiful’ which brought the audience to its feet in appreciation, one of those tacky American habits we seem to have picked up over the years, but on this occasion it actually worked as the ensemble went straight into an encore of ‘I Feel The Earth Move’ causing us – yes my dear reader, I include myself here – to break into spontaneous dancing.

The set changes were very smooth, with the various props being on low platforms which slid on and off seemingly without any human assistance. Mention must also be made of the musicians in the orchestra pit who backed up the singers superbly.

If you want the story of Carole King’s life then I suggest that you search the internet, get a biography, or download a documentary, but if you want a great night out full of good music performed to a brilliant standard, then go see ‘Beautiful’.

By the way, the relevance of the musical to you young whippersnappers? Barry Mann and Cynthia Weil are responsible for the current ear worm ‘Make Your Own Kind Of Music’ which was written for the wonderful Mamma Cass Elliot in 1969, but is now sung on a Skoda advert by the equally wonderful Paloma Faith.