In the week that Leeds Grand Theatre is celebrating its 140th anniversary, Stan Graham attends a performance of Jersey Boys.

For those of you who are not familiar with this musical – where have you been?   Jersey Boys is not about sweater salesmen or even dairy farmers on one of the Channel Islands but a biography of the Four Seasons pop group, who all hail from the state of New Jersey.

The Garden State has produced a plethora of talent, from Count Basie and Frank Sinatra through to Debbie Harry, Jon Bon Jovi and of course, Bruce Springsteen. In the early sixties the two biggest groups on the face of the planet were the Beach Boys and The Four Seasons, which explains why they were able to ride the storm caused by the British Invasion in 1964.

Their story is not a straightforward rags to riches tale, more of a rags to riches to rags to riches etc. Being from a poor Italian neighbourhood in Newark they were also no strangers to the inside of various penal establishments, being petty, and not so petty, criminals in their youth. The neighbourhood culture which made them almost destroyed them when it was discovered that Tommy DeVito, who founded the group, had been living far above his means and had not only amassed a great deal of debt, but also had not been making provision for the impending tax demands. Through various dealings the difficulties were overcome and the affairs of the band taken over by Frankie Valli, the lead singer, and Bob Gaudio, the main songwriter.

The mechanics of the musical were very interesting, in that it was divided into four segments, with each group member giving his account of events, and another four segments, indicated by a projection of the name of each of the four seasons on the back of the set indicating the stages of the story. We started with Spring, telling of the beginning of the band, through the first big successful period, Summer, the beginning of the end, Fall, and finally the total break up, Winter. Well, I was impressed.

To go into detail about the story would take up far too much time as it is pretty complex and this is one thing I found irritating about the show. The director has tried to tell the story in too much detail and, as such, the scenery is constantly shifting with actors playing multiple characters rushing on and off stage. The other slight quibble was that the songs were not performed in chronological order but inserted so as to tie in with the story, however tenuous the link, so when Frankie Valli asks the local organised crime boss for money to get them out of their financial mess he sings Beggin’. Cringe!

The singing was very good on the whole with Michael Watson’s portrayal of Frankie Valli superb. Mr Valli has one of the most distinctive voices in the history of pop music and he absolutely nailed it. Sadly, owing to illness, the other three group members were played by actors other than those listed in the programme. They all did a great job except that the bass voice was missing. Peter Nash as Tommy DeVito was the perfect wheeler-dealer, Nick Massi the ‘invisible’ member of the band handled the comedy a treat and James Winter gave a superb acting performance as Bob Gaudio, the sensible one who had never been in trouble before he joined the group and was far more suited to songwriting than performing. This also meant that the peripheral characters were asked to multitask on a greater scale than they normally would and every one of them rose to it superbly.

As already mentioned, the direction by Des McAnuff moved on apace and the choreographer, Sergio Trujillo, accentuated the dance moves of the time to add comedy without crossing over into farce. Again, mention must be made of Michael Clark, the projection designer, whose graphics were an integral part of the show rather than being solely for effect. The orchestra was also impeccable and recreated the original sound perfectly. As seems to be compulsory with this type of musical, there were a few songs at the end to which we audience members could rise to our feet to have a boogie and for which I do not need to be asked twice. 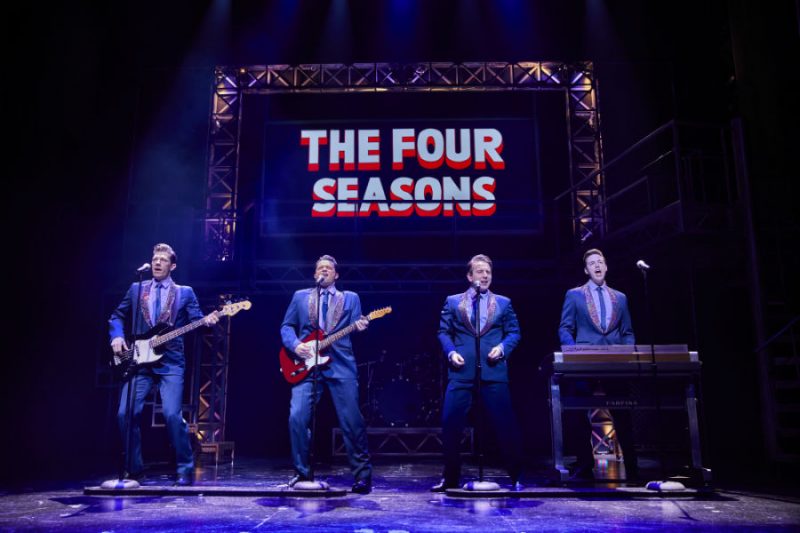 It would be easy to finish this piece off by saying Oh!What A Night but that is a bit obvious so I will just pour myself a Sherry and say Bye Bye Baby.