Opera, singspiel, propaganda? This production may be too overtly politicised for some.

Despite a heavy-handed and preachy political message, there was much that was good about this performance. As always in Opera North productions, the musicianship (from orchestra, soloists, and chorus) was superb – indeed, beyond reproach for all but the most exacting musical critics.

Martinu‘s compositional genius is another highlight of the evening: he is a clever composer and a shrewd orchestrator, often achieving a great effect from very few instruments.  It was nice to hear the mid-20th-century harpsichord, as the instrument was when Martinu was around (the modern harpsichord is closer to those of the 18th century, whereas this has a different, heavier sound, well known from, say, the Addams Family theme tune).

There were some delightful moments in the music, such as when female lead Katerina’s (Magdalena Molendowska’s) late-romantic rhapsodies alternated abruptly with a twee accordion piece in the third Act—a wonderful piece of modernist humour.  As always, the lighting was beautifully done, and the set and costume teams did a good job (set and lighting direction by Charles Edwards; costume by Doey Lüthi), even if their work was a bit lost on a confused production.

What, then, could the production have done better?  Reading through the programme introduction before the curtain rises, I wonder whether I am receiving an oration, a sermon or prophecy as I learn of ‘political positions […] becoming increasingly polarised and attitudes more entrenched’ in today’s benighted society; ‘the power of the arts in general and opera and music in particular to remind us of our shared humanity’ (even though opera belongs, like it or not, to a minority elite); Opera North’s five-minutes-old ‘firm sense of […] social purpose’; and how Martinu’s opera will be ‘a universal parable for our deeply divided times’. (Is it a universal parable or a parable for these particular dark ages?—an important confusion as the evening progresses.) The level of woke-elite superciliousness is wearisome. Have I come to listen to Ezekiel or for a pleasant night at the opera? For these slightly insulting platitudes I could turn on the television any time of day.

The longer essay on this subject from the manager of Leeds community project Meeting Point (who are on the ground doing the work), Emma Crossley, is humane and touching, and avoids the above. However, even her essay twice describes points of view opposing her own as ‘rhetoric’—itself a shrewd piece of rhetoric—and ‘shamelessly timeless’, as though the other view is simply beyond the pale, can only held by the ignorant, irrational, or hate-filled, and is necessarily not a reasoned conclusion from a different perspective (which is the basis of the oppositional politics on which modern parliaments operate). Her article’s point is not helped by the staggeringly bad decision to plaster the Leave campaign’s infamous poster (you know the one) over a two-page spread.

Knowing I am in for an evening of political penitence and self-flagellation, I put my hopes in the music.

This opera has two stories which never intersect quite as beautifully and perfectly as composer-librettist or this production want them to. It is set in the Greek village Lycovrissi, whose inhabitants are putting on a play of the Passion of Christ. The lead actor, Manolios (Nicky Spence), who is elected to play Our Blessed Lord, takes his new-found acting profession more seriously than Daniel Day-Lewis and Stanislavski put together. By the final scenes, he has virtually adopted the person of Christ, becoming a sort of would-be saviour for Lycovrissi—not to mention enormously blasphemous. The opera doesn’t say clearly whether we are supposed to approve of this puppet (because political and not spiritual) saviour or not. Therefore, when, to an orchestral flourish, he is murdered by the villainous Panait (Jeffrey Lloyd-Roberts)—who (it is implied) brains him with his own crucifix!—I can only roll my eyes. 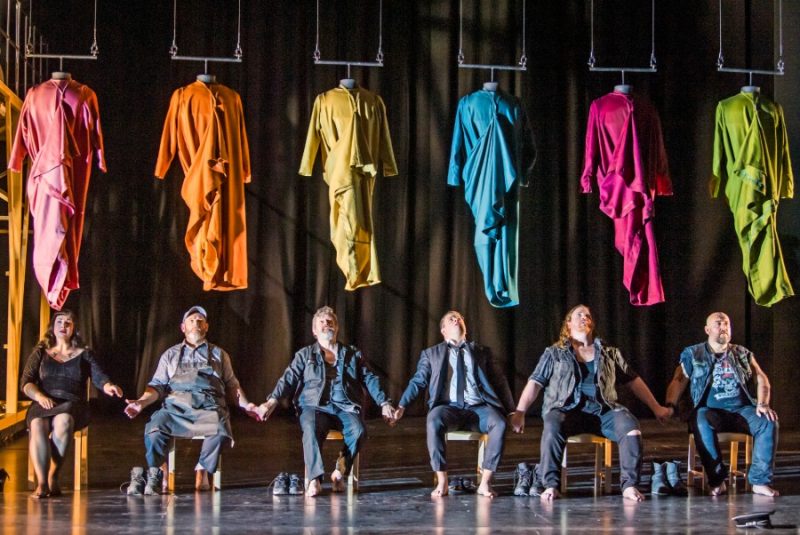 Alongside this is the second story wherein some refugees come to Lycovrissi, set up camp at the people’s invitation at the nearby Sarakina Mount, and then not a lot happens (so that the dramatic climax described above does not come off either as dramatic or as a climax). The production wants these to stand for the complex Middle East/migrant crisis situation of today. But these refugees are, like the Lycovrissians, Greek Christians—and they have been driven out of their homeland by the invading Turks. So it always goes when an artwork from another time is forced into the tyranny of being ‘relevant’ today: it always comes off as a Procrustean bed once the ill-thought connections show their inconsistency and internal contradiction and therefore begin to break down. 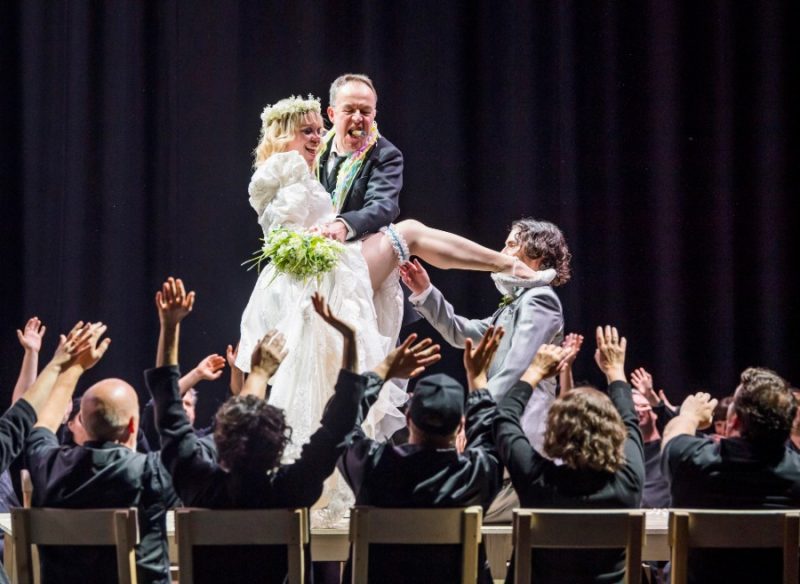 The story is not the most enthralling then. Neither are the characters: the protagonist is a cipher, but the villains are worse. They are simply not characters: they are emptier than the moustache-twirling villains of Saturday morning cartoons. One of them is, of course, a priest (Stephen Gadd). They address the audience directly, like the vices of late medieval and early Elizabethan drama. The two love interests are nothing. The priest who leads the party of refugees, Fotis (John Savournin), is—I assume—supposed to be a sympathetic figure. Why then does he spend most of the opera crawling around the stage without a shirt and—except for his white, clean, and impeccably-pressed slacks (as all refugee priests wear)—in so doing, look like Gollum? Other strange choices are made: why, for example, are the Lycovrissian villagers dressed as bikers/Hell’s Angels? The scorn for the lower classes which is implicit in the decision to dress up an actor (and one with as bourgeois a name as Jeffrey Lloyd-Roberts) as a biker—who then spends most of the opera visibly molesting his good lady before finally committing a brutal murder—is staggering. 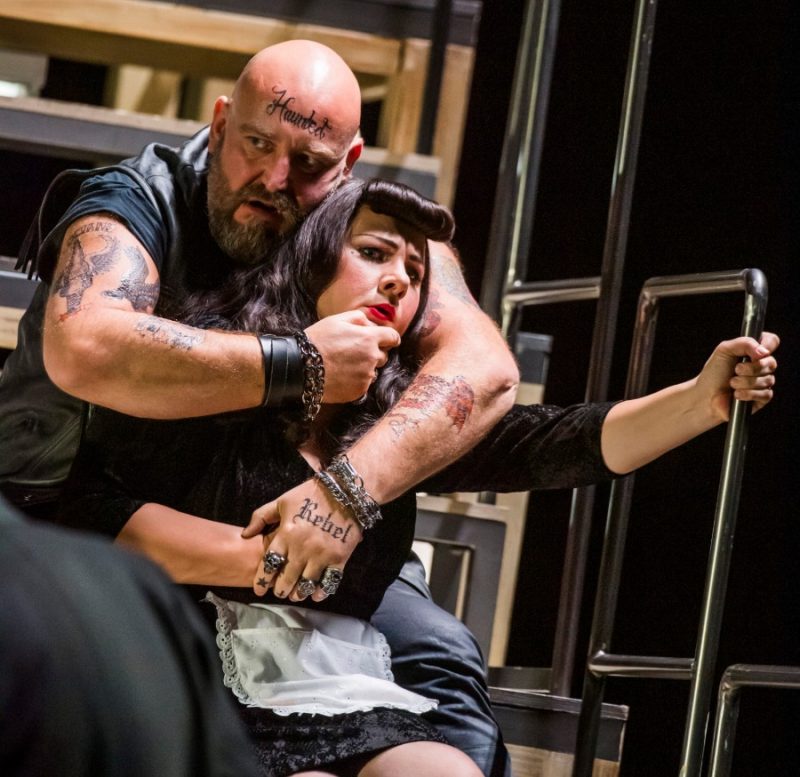 A problem with appropriating the story to illustrate today’s political vanities is that they want it to be enormously grave and serious; but the story is impossible to take seriously. Whenever a composer does his or her own libretto, the results tend to be regrettable: remember Tippett’s A Child of Our Time, which has affinities with this opera; it is full of beautiful music – and some of the worst poetic writing of the twentieth century. Martinu takes his tale from Christ Recrucified by Nikos Kazantzakis (better known for Zorba the Greek and The Last Temptation of Christ). 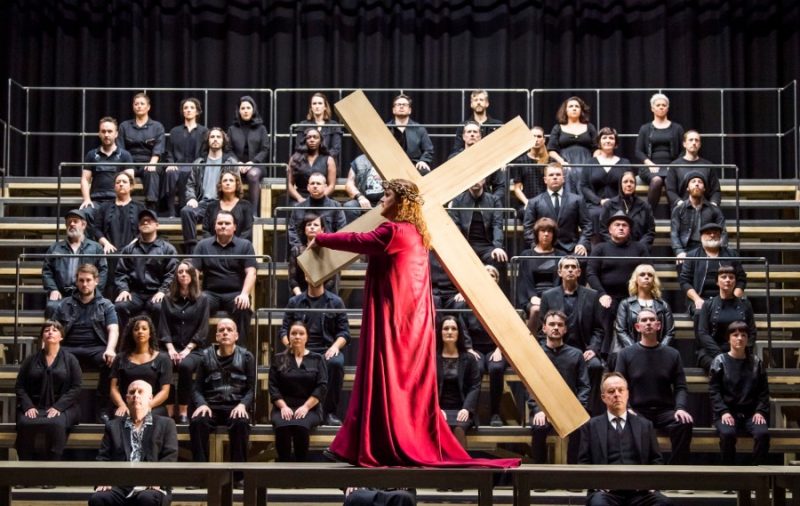 Maybe the story has a coherence and conviction in the novel which doesn’t make it into the opera. One does wonder why it is always the case that novels are adapted for drama. The whole point of a novel is to indulge in a copiousness that is not allowed in the stricter and earlier form of drama. One is not confined to a rigorous, tight plot; therefore, the likelihood that a novel adapted for screen or stage will suddenly acquire a masterful dramatists’ plot is almost nil. Look at Shakespeare: he would always adapt brief novellas and, in doing this, created some of the greatest dramas ever because he could work up from his source’s bare, schematic material. According to the programme notes, Martinu had plenty of trouble cutting Kazantzakis’ novel down to a libretto; apparently his version did finally get the approval of Kazantzakis, though the latter alarmingly said to Martinu in a letter concerning the libretto: ‘in opera, music means everything. I remember very well that Mozart’s operas have ridiculous libretti!’  Not the most effusive praise, then.

The strange thing about the script is that it really is not a drama, but more like a series of tableaux which, together, create a sort of skeleton narrative. This is true of the music, too. This opera has beautiful music: but the problem is that it never lasts for more than a minute or so. Other operas build up drama through the music so that, at culminating moments, one really cares about the characters’ situation, engages with their arias, etc. This opera disintegrates drama at every turn so that, at the great moments of spiritual transformation which characters undergo, it is hard to care.

Martinu’s vision for the opera could be coherent in a less crazy production, and even effective as a modernist symbolic drama. But in this, the appropriation of Martinu’s vision to contemporary political ends distorts it. In fact, even the script might be far from Martinu’s intention. There are two versions of this opera: the 1961 “Zurich” version, and the 1957 “London” version. The latter, which we are hearing tonight, is really the “reconstruction” by Ales Brezina. Who knows what the original was truly meant to sound like? It was not performed, but rejected by London’s Royal Opera; it was reconstructed and first performed in the 90s. Brezina, who offers an interesting essay in the programme, offers us assurance that we are getting genuine Martinu:

‘Surprisingly, not a single page of the [original] score was destroyed or lost, but in reconstructing the original version of the opera it was necessary to use many sources. I was able to verify the accuracy of my reconstruction by comparing it with the handwritten piano-vocal score of the first version, which Universal Edition commissioned in 1957 and kept in its archives, and the two correspond exactly.’

Well, that sounds very exciting in a nerdy, scholarly way – but if it is genuine Martinu and reflects what The Royal Opera rejected in 1957, well, this is a positive reflection on the judgement of The Royal Opera at the time. 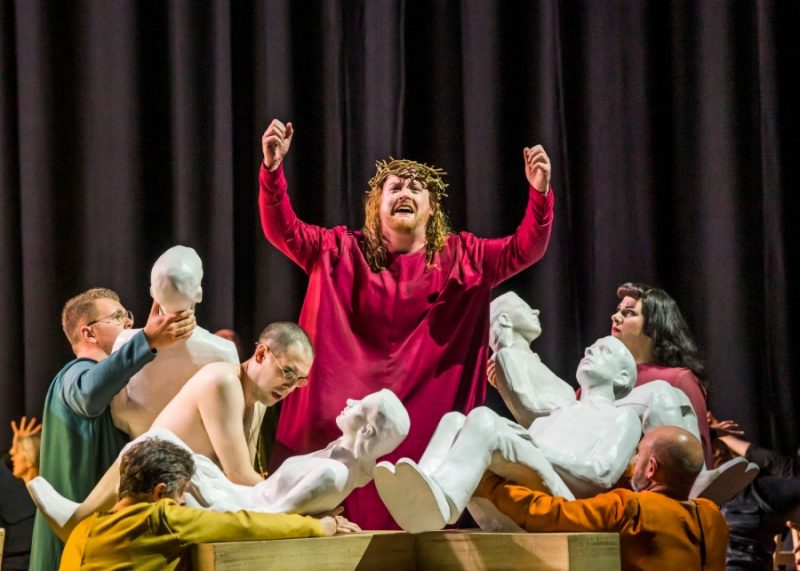 Although this production made a pig’s ear of its allegorised version of a reconstruction which arguably was not meant to exist, there was still a fair bit to enjoy. But I don’t see why the production had to be so ugly. Had I parted with money for my ticket, I would have been miffed to have done so as I had to watch Nicky Spence simulate self-pleasure, or watch Lorna James (who played Lenio) and Alex Banfield (who played Nikolio) writhe in a performance of the inevitable literally seconds after first falling for each other. How about a dignified role worthy of such talented singers? And how about leaving today’s newspapers where they belong—wrapped around fish and chips?

All photographs by Justin Slee.