Not Such Quiet Girls – at Howard Assembly Room Until 1 December

Anything which involves Opera North, Leeds Playhouse or Howard Assembly Rooms is always worth a visit, so when I was asked to review the World Premiere of Not Such Quiet Girls, which is a collaboration amongst all three, I was delighted.

The production is a fusion of song, dance, drama and music which recalls the plight of the women who worked as ambulance drivers behind the front line in the First World War, and is part of the season to commemorate the centenary of the Armistice.

When we think of the first global conflict, it is usually the men who spring to mind, with the iconic photographs and jerky film clips of their sitting in muddy trenches, bombs exploding all around and the forays ‘over the top’ on mostly futile attempts to gain a few yards of ground. This is understandable as the vast majority of the combat forces were indeed men, with the few women who had enlisted doing the support work. 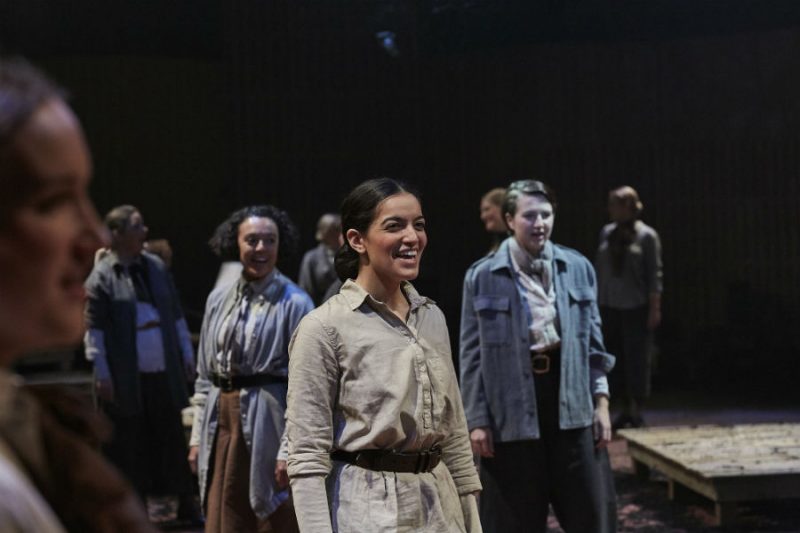 The thing which struck me was the class difference between the genders of the participants.  Yes, there were upper middle class and aristocratic men on the front line, mainly officers, but the ‘Tommys’ were largely urban working class or farmhands. The women, on the other hand, were predominantly from the upper tiers of society doing their bit for King and Country. It should have been blindingly obvious, but has never occurred to me before, that women ambulance drivers would come from wealthy families as they would have been the only ones able to afford cars in 1914. The working class women filled the factory and agricultural jobs at home, left vacant by the fighting men. Jessica Walker, the writer, says in the programme that she was inspired to write the piece after seeing a photograph of a group of five women standing in front of ambulances on the front wearing fur coats over their uniforms. These women were referred to by the acronym of FANYs, which stood for First Aid Nursing Yeomanry.

As well as their harrowing experiences of the action which involved driving ambulances under fire, tending to men with horrendous injuries and cleaning the blood and body parts from their vehicles, the work illustrates the way in which the women became, and I hate to use this cliched word, liberated from both their expected life and gender roles. In some corners of society, women are even now expected to get married to someone of equal, if not higher, status and produce children to carry on the family line; an heir and a spare was the term which was often used.

Freedom to make their own choices and reevaluate their lives was a side effect of the war work, illustrated by the symbolic removal of her corset – worn over her clothes, I hasten to add – by the new recruit. As with the men of certain standing who were practising then illegal same sex relationships, these women felt able to consummate their feelings towards one another which, again, had probably been latent during their time in private education and finishing school. They also became more politically aware, mixing with soldiers from very different backgrounds, thus causing some of them to join the suffrage movement later. One of the songs contained the line, ’There are no men so why should I be a woman?’ I liked the way that these issue were handled, being powerfully stated but not preachy.

All of the action takes place in one large space in the middle of the room, with seating on three sides and the orchestra on the fourth. The only set comprised three small platforms used to various ends. The floor was strewn with black chippings to depict the mud. It was designed by Polly Sullivan, as were the costumes. Whilst the set worked brilliantly I must admit that it took me a little while to decipher the costumes and work out who the women in corsets were supposed to be. As the cast was totally female, a clever trick was employed, with Claire Pascoe playing the father of one of the ambulance drivers at home with his wife and then singing ‘The Army of Today’s Alright’, both in the same male attire.  This song was originally sung by Vesta Tilley, who was famous for her cross-dressing music hall performances.

The lighting designer, Mike Lock, deserves a mention as he was very inventive when setting the atmosphere, most notably by the use of hand-held torches. Choreography and Movement were directed by Natasha Harrison, who again worked wonders by moving what was a fairly large cast around the stage, dancing, marching and tugging (a tug-of-war without a rope).

I am really pleased to be able to mention the band by name here as the performances were exemplary. Joseph Atkins, the Musical Director, played piano, Emily Burkhardt multi-tasked on Clarinet, Bass Clarinet and Alto Saxophone. Viola and violin were played by Harriet Mitchell, whilst Laura Wilson completed the ensemble on Trumpet and Flugelhorn.

The Sound Designer, Stuart Mellor, evoked the atmosphere of the front line with the constant rumbling of distant explosions and the sound of a Zeppelin flying overhead. There was also one loud explosion which must have made the audience of Jersey Boys, which was playing simultaneously at the adjoining Grand Theatre, wonder what on earth was happening.

The main performers whose acting, singing and dancing were, without exception, brilliant comprised Tara Divina, Cora Kirk, Laura Prior, Miranda Bevin, Gillene Butterfield and the aforementioned Claire Pascoe. I would have loved to have mentioned the rest of the cast who were just as good as the principals, but it was so large that it isn’t practical. Their singing was superb, as you would expect, and enhanced by their positioning not only in the main body of the room but also from behind the seating during a couple of songs, thus creating an eerie atmosphere.

The production, which was supported by Leeds City Council, was directed flawlessly and innovatively by Jacqui Honess-Martin.

I hate to finish on the downbeat but my only quibble came at the end of the piece. The final part was set in the present day and the only way we were given a clue as to this was by the taking of a group photograph of the cast using an iPhone. This led to a review of the changes in women’s lives in the last hundred years and thanking those who had been a part of them. I found this to be unnecessary and more than a little patronising as all of the powerful points made thus far had been done so perfectly, leaving no need for a round-up. 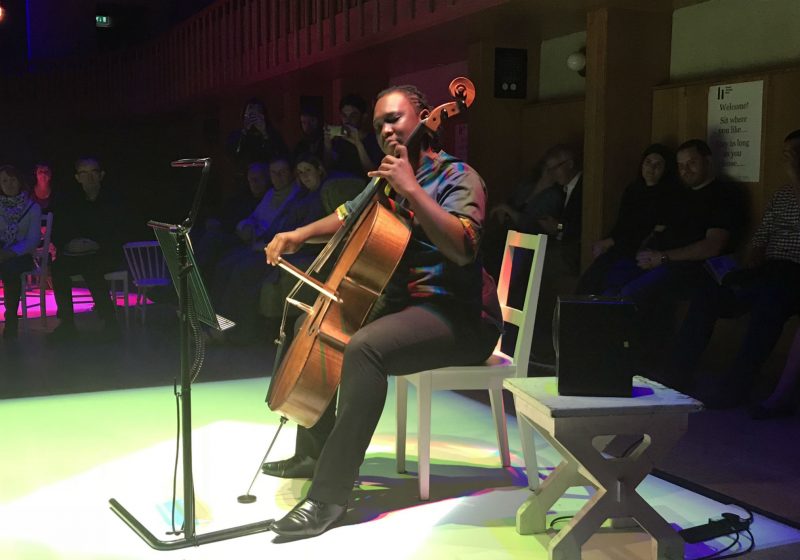 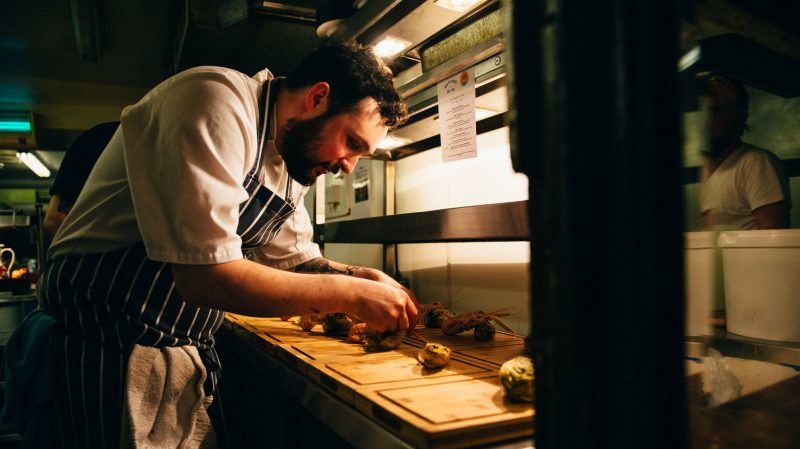 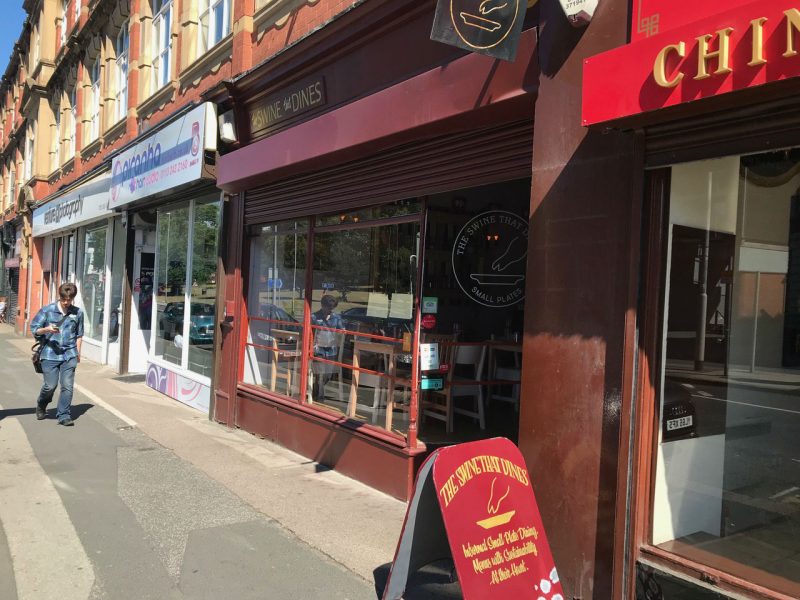 Let’s Do Lunch at The Swine That Dines