I was asked to go to review this play at the very last minute, but was happy to do so as I remember enjoying the film when it first hit the cinemas in 1988.  In any event, I leap at any excuse to go to the Grand Theatre.

It was only when I looked at the programme that I discovered it was a Bill Kenwright Production. I like Mr Kenwright as a person and enjoy listening to his rock and roll record programme on Radio 2, but on the last few  occasions of attending performances of his productions, I have not had very favourable impressions. Being someone who approaches everything with an open mind, I resolved to put the previous bad experiences out of my mind and take the play as I found it.

The first thing I found was someone sitting in my seat. When I pointed it out that they were in K11 they showed me their ticket which did indeed say Seat K11, but the problem was that it was Seat K11 at the City Varieties. Oh, how we laughed!  Once ensconced in my freshly warmed seat, I settled down to watch the play.

My fears seemed to have been justified when the opening scene, which illustrated that Charlie Babbitt, played by Ed Speleers, was a wheeler dealing debt collector, was played at a hundred miles an hour, with most of the dialogue being indecipherable as the sound was not very well amplified. I consulted with my fellow theatregoers, who confirmed that they could not make the words out either. It didn’t matter too much at this point as it was just a scene setter, but it was more than a little irritating when the meaningful dialogue was being delivered.

My other reservation was that the character of Raymond Babbitt, Matthew Horne, who is savant autistic, was played as an exaggerated caricature seemingly to generate laughs. Even thinking back as to how people on the autistic scale were regarded in the 1980s when the play was written, this was over the top.

The first half of the play deals with Charlie’s business taking a nosedive and his need to raise a lot of money in order to prevent being declared bankrupt. He hears the news that his estranged father has died and, after the funeral, he is informed by the executor of the will, that he has a brother of whom he had no previous knowledge and to whom all of the estate had been left in trust, except for an old car and a collection of prize rose bushes. The trust was set up. because his brother was autistic and so deemed not capable of handling his own financial affairs. Charles tracks down Raymond to an institution and decides to kidnap him and convince him to split the $3,000,000 in the trust fund. As Raymond is a LA Dodgers baseball club fan, Charlie sets off on a road trip with him to see them play. So far, so bad. When the actors appeared in the second half, Raymond’s character had been toned down more than somewhat and the pathos of the situation of the two brothers, who begin a bonding process, was much better illustrated. The humour also became more compassionate than slapstick, with the play taking on a new dimension. There was a wonderful scene in which Charlie teaches Raymond to dance in their Las Vegas hotel room after Raymond has won enough money to clear Charlie’s debts with his ability to count cards on the blackjack table. Whilst they were celebrating in the casino bar, Raymond was approached by a gold digger whose final words to him were, ‘Don’t call me, I’ll call you’. As Raymond takes everything literally he thought that he really had a date with her, hence the need to be able to dance. 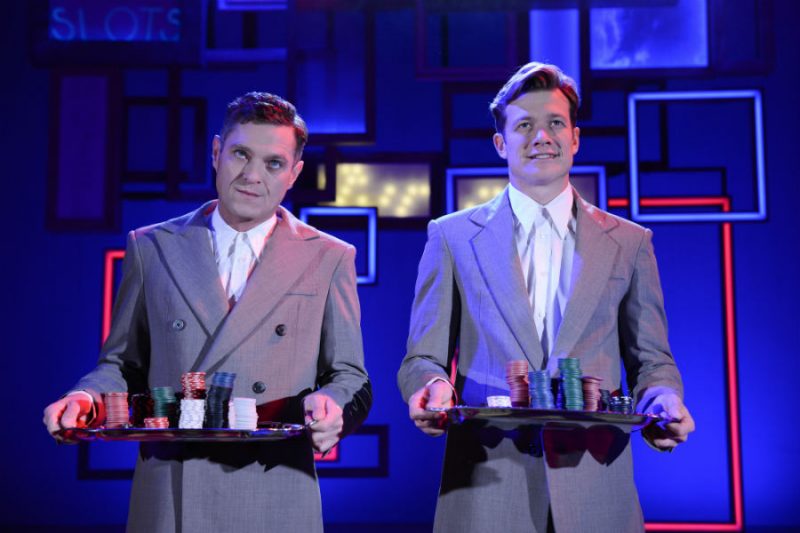 As the play progressed, the bond between the two brothers strengthened and Charlie resolved to get Raymond discharged from the facility to which he had been confined by his father. Once again this was handled with a sympathetic hand which proved to be very effective and moving. I was left wondering why the whole of the piece could not have been handled in this way as I’m sure that the audience doesn’t need to be bludgeoned into the realisation that autism sets its sufferers apart from ‘normal’ society. 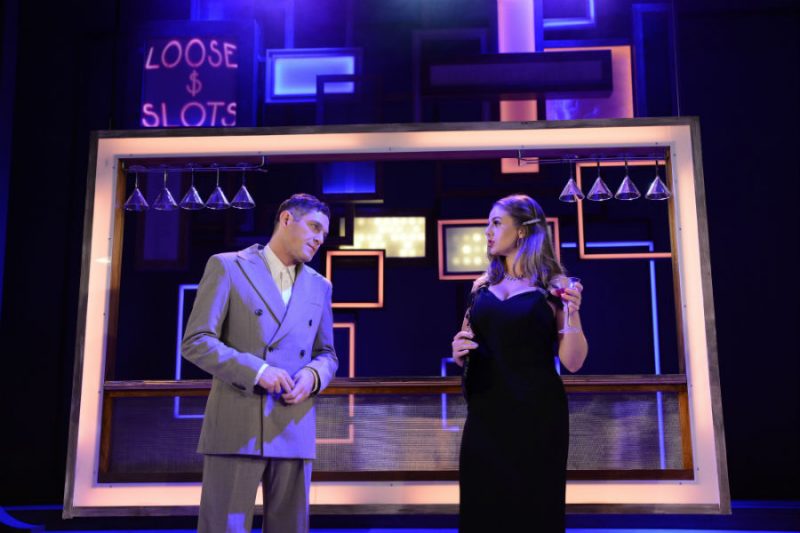 Elizabeth Carter, who played Susan, Charlie’s fiancee, put in a good performance but too many of her lines were delivered with her back to the audience which made them even more difficult to hear. Dr Bruener, the medic in charge of the facility to which Raymond was confined, was very good, as were the remainder of the cast who each played multiple parts. Mairi Barclay was over the top, but in a good way, playing Iris the Hooker, but her slapstick performance as a waitress took things back to the farcical.

The set was sparse but effective thanks to the designer Morgan Large and Jack Weir’s lighting worked well, only the sound was a disappointment.

Overall, I enjoyed this production of Rain Man and judging by the rapturous applause at the end, so did the audience. I just wish that the works produced by Bill Kenwright would treat their audience like adults from the outset because, on the evidence of the second half, when this is done the plays work very well indeed.