The Girl on The Train at West Yorkshire Playhouse

Well, West Yorkshire Playhouse has done it again! After a run of productions which have gone on to great things, it is now premiering The Girl On The Train based on the phenomenally successful book of the same name by Paula Hawkins. Everyone I spoke to about going to see the play seemed to have read it but all expressed (no pun intended) doubts as to how the story could be adapted for the stage.  I, on the other hand, came to the play having not read the book but accompanied by someone who had.

This interpretation turns narrative into psychological drama, with a focus on the interaction amongst the characters. I do not propose to make any further comparisons, as I want to review the play for what it is.

What it is is a stunning piece of work portraying the mental struggle of a woman who has been observing the occupants of a block of flats where she used to live as she passes each day on the train.  One of the residents disappears and she, Rachel, takes it upon herself to investigate this disappearance when it becomes apparent that the investigating police officer, D. I. Gaskill, begins to suspect that she has a hand in the event. Rachel, who is an alcoholic, has what she calls black holes in her memory, symbolised by a painting by the missing woman depicting a black hole and which hangs on the back wall of the set throughout. These memory lapses mean that not only does she mistrust the other characters’ accounts of the events but also that she cannot trust her own recollection.

As the story develops, secrets about the characters are revealed.  All of the cast delivered excellent performances, but special mention must be made of Jill Halfpenny, who played Rachel, a woman who goes from being wracked by self-doubt through an awakening and a rebirth, which plays ironically for a woman unable to have children.

I found the play was a study in relationships as well as a comment on the frailties of each one of us. What I did not expect from a psychological thriller was the humour. The subject was so dark and deep that it came as a shock when the characters started cracking jokes and engaging in banter, but on reflection it added to the tension illustrating that seemingly normal, well-rounded people can be tormented souls. 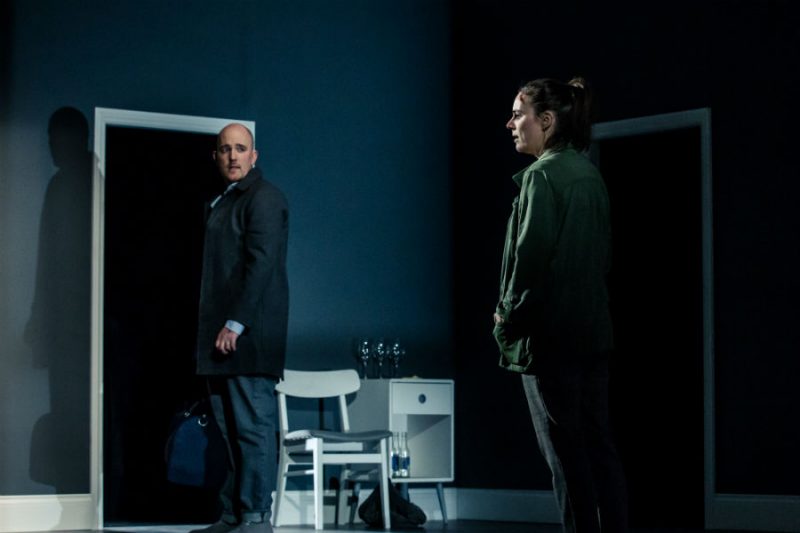 The acting was superb, which with the other elements combined to create a tense atmosphere which intensified as the piece progressed. The set comprised an oblong room which was minimalist in design, beginning with just three doors and the aforementioned painting. It served not only as Rachel’s flat but also her ex-husband’s home, the missing woman’s partner’s apartment, the therapist’s consulting room and home, and the police station. The painting’s presence in all of the venues was explained by her having produced several versions of it. Very subtle addition and subtraction of contents were made to distinguish the locations, but the lighting defined the space and changes of scene were signalled (again no pun) by the loud noise of a passing train and a video feature to illustrate it. It was very effective, as was the only major change in the set when it moved, almost unnoticeably, during the action to reveal a representation of the railway track. Totally amazing.

This adaptation worked wonderfully, the acting was top notch, the production superb and this will obviously go from strength to strength when it finishes its run in Leeds and goes on tour. As I began by saying, West Yorkshire Playhouse has done it again!