Well, at last it’s happened – I have joined what seems to be the 99% of the population who has seen Wicked.

This is the musical which appears to have the same effect on people as The Rocky Horror Show and the film version of The Sound of Music, in that there is a large army of fans who follow the production from place to place, intent on setting some kind of attendance record.

My incentive to go to this performance on 14th June was provided by my friend Lucie who has been set to see the show on several occasions, but always met some obstacle preventing her from going. Thankfully, there were no unforeseen glitches last night and we arrived at the even more impressive than usual Grand Theatre, to be met by two members of the cast in full regalia posing for photos with the devotees, and a giant Green Carpet. This was a bittersweet touch as, in addition to celebrating the colour of the main character in the show, it is also the colour which had been very much in evidence throughout the day in remembrance of the Grenfell Tower disaster.  After sparing a thought for the victims and their nearest and dearest, we went in to find out what all the brouhaha was about. 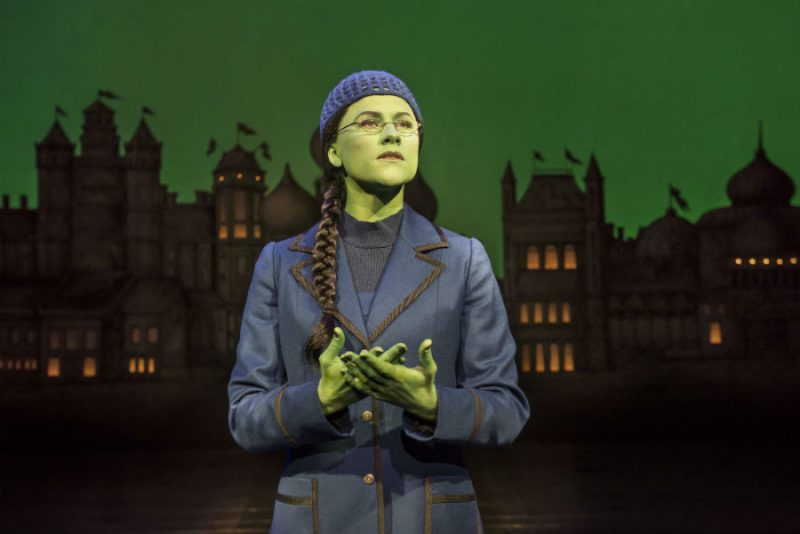 Not only had the Grand Theatre gone to town on the outside (all right I know it is in town already) but the interior had also been augmented by a huge mechanical monster’s head above the proscenium. The curtain was a map of Oz and its environs, with the various settlements and geographical features named.  I approached the show with a little trepidation as, although I have seen The Wizard of Oz, it was many years ago. I have also seen Dorothy’s Ruby Slippers, as worn in the film by Judy Garland, at the Smithsonian in Washington, which were displayed next to the original Kermit the Frog. There’s no getting away from the green theme. As it happens I needn’t have worried as no prior knowledge is required, although there were a few ‘in’ jokes for the aficionados. 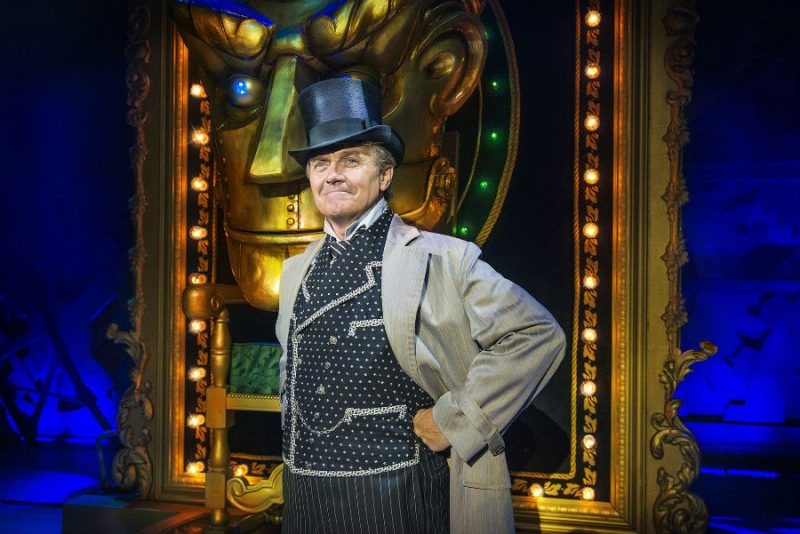 Wicked is based on a novel by Gregory Maguire as a study in wickedness, and whether it is a case of nature or nurture. He used the characters created by L. Frank Baum as illustrations for his thesis. In a neat touch the Wicked Witch of the West is named Elphaba, which is taken from the first syllables of the name L. Frank Baum. I suppose it should really have been Elphraba but we’ll let him off with that missing ‘r’.

The persecution of people who do not conform and the effect it has on them is not a new concept.  I remember a film in the 1950s called The Boy With The Green Hair. Green again, but Wicked tackles the subject on several levels. The plot is as follows: a baby who has the misfortune to have been born green (Elphaba) goes to university with her wheelchair-bound sister (Nessarose) where she comes across an attractive spoilt blonde girl (Glinda) and, by a twist of fate, ends up sharing a room with her. 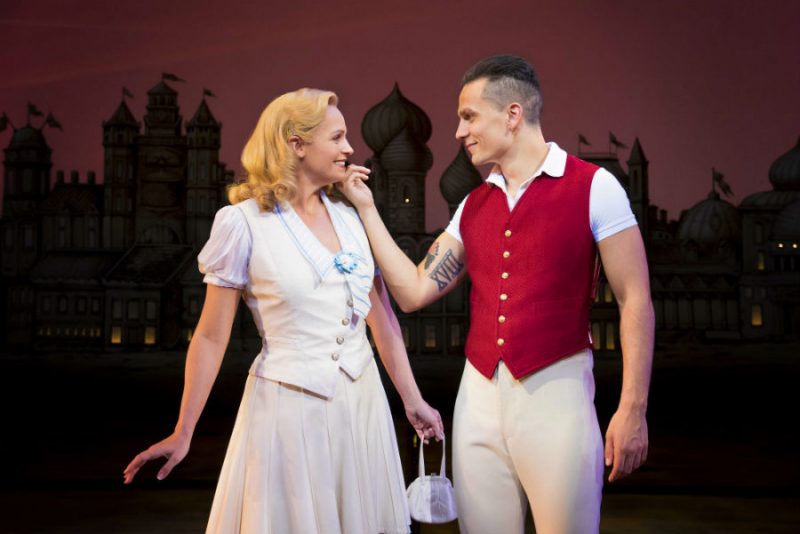 Elphaba is shunned by everyone including Glinda, whereas she is the centre of attention, cue love interest Fiyero. He arrives on campus and is immediately hit on by Glinda, who tricks him into marrying her.  Meanwhile, Fiyero begins to become fond of Elphaba. Before Fiyero’s arrival Glinda had been flirting with Boq, whom she dumps when Fiyero arrives, by tricking him into going to a dance with Nessarose. This shows us it is the blonde popular conformist who is the wicked one rather than the green outsider. Anyway, the plot thickens and the relationships change in such a way as to elaborate any further would amount to a huge spoiler. There are many subplots involving talking animals, flying monkeys, the college principal and, of course, the Wizard of Oz. 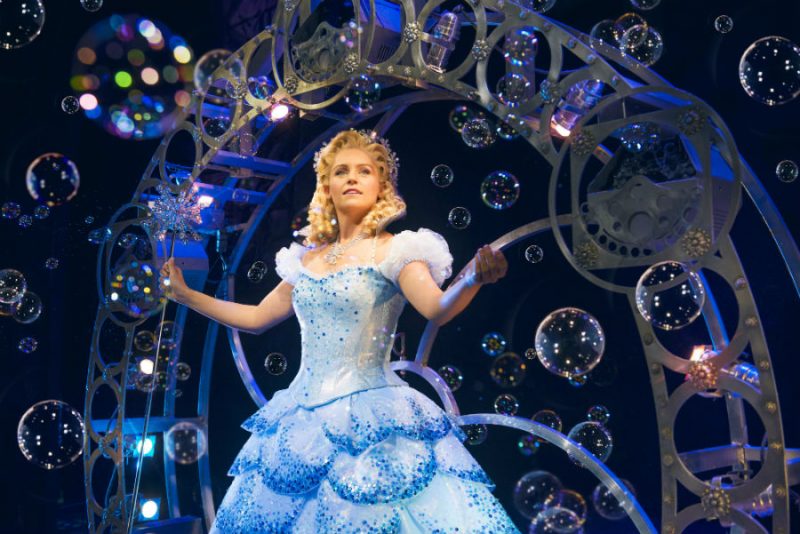 Although the plots are finely interwoven and can be taken on several levels, the show is basically a musical and, as such, is another triumph. The songs by Stephen Schwartz are superb and although they have been composed to complement the story, there are several which work brilliantly as stand-alone numbers, namely Popular, I’m Not That Girl and Defying Gravity. All good songs need good musicians and singers and here we were given an absolute treat. Nikki Bentley as Elphaba, Helen Woolf, Glinda and Aaron Sidwell who played Fiyero interpreted the songs impeccably. Not only were they note perfect but the intonations were also superb, conveying pathos and humour excellently. This is not to take anything away from the other performers: Kim Ismay as Madame Morrible, Emily Shaw as Nessarose, Iddon Jones, Boq and Steven Pinder the Wizard, who were all superb. Once again, the songs combined with good singers would still not work without a great orchestra and this is what we had. I feel sorry for theatrical musicians as they have to play throughout the piece but are normally hidden away under the stage, visible only to the first two rows of the front stalls. 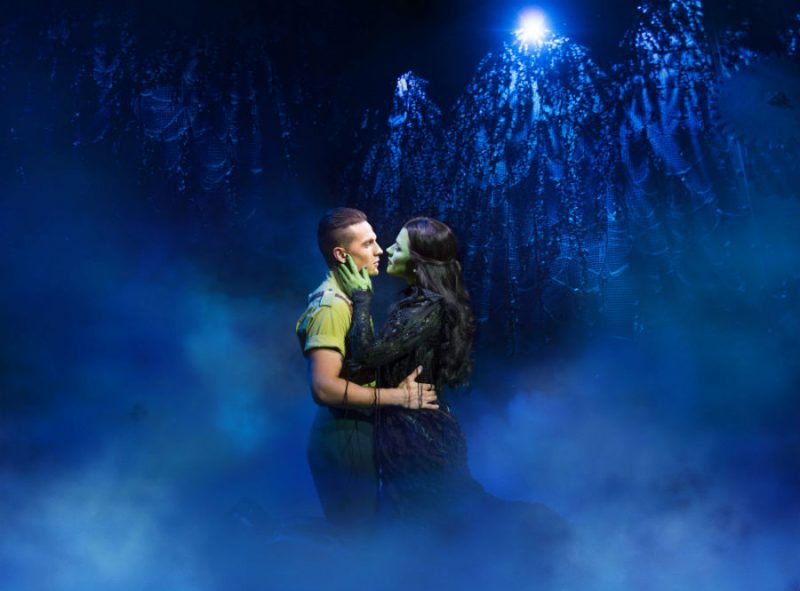 The aforementioned performers are not only great singers but also their acting and dancing was of the highest order. The comic timing was worthy of the best double acts. If the dancing from the leads was great then that of the ensemble was breathtaking, especially those taking the parts of the monkeys who swung and jumped from the highest parts of the set with the gymnastic ability of Olympic gold medallists. Speaking of the sets, they were a work of art in themselves, moving between scenes in seconds. The mechanical monster above the proscenium was joined by another one on stage and the sound produced by them was frightening. The sound and lighting added menace when needed but was also subtle in the more intimate scenes.

I cannot see myself joining the ranks of the ‘I have seen Wicked a hundred and thirty-five times’ brigade, but I have to be grateful for Lucie’s previous misfortunes which led to my seeing it once.

Wicked runs from now until 7th July at the Grand Theatre Leeds.