Life never ceases to amaze me and the ingenuity and creativity of people amazes me even more. Last night I enjoyed one of the best culinary experiences I have ever had, and as I am pushing 68 years old that is some feat.

The venue was the grounds of Harewood House where there is an enterprise named Harewood Food and Drink Project which produces food from the estate to supply to local restaurants and shops. So far, so ho hum, but here there is an emphasis on rare, and sometimes unique, produce. The cattle and sheep breeds are not what you would expect in Yorkshire, the fruit and vegetables are also surprising varieties of familiar items and each has a story.

The food was prepared by Josh Whitehead from the Ox Club, Headrow House, Leeds. It had been several days in the creation and cooking, not to mention the lifetime of research and experience which was evident in each dish. Apart from the food there was the spectacular setting, or settings, of the estate’s grounds. Each of the courses was served in a different location within the grounds and the diners ferried from one to the other by what can only be described as utilitarian vehicles. 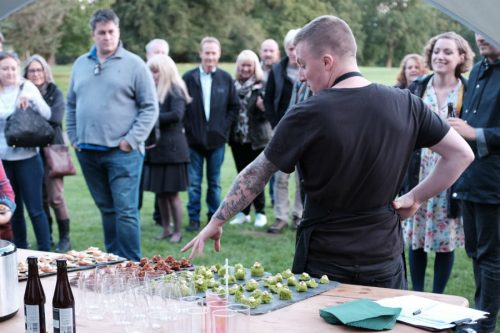 We met outside All Saints Church, near the house itself, where a gazebo had been erected and a selection of three canapés was offered along with a cocktail based on gin and campari. Fortunately we were also supplied with a pack of menu cards beautifully presented in an envelope and secured with a seal. The three varieties were ‘Chicken Pate Toast and Young Coconut’, ‘Venison Tartar, Wild Rice, Turmeric and Green Shiso’ and ‘Parsley and Peanut’. All were superb, and I will probably be repeating that comment a few more times before this review is over. Each showed what can be done with fine ingredients and imagination. The toast was two varieties of flavoured flatbread topped with the pate and coconut, a combination which mere mortals would probably never come up with but this was Josh Whitehead.

The venison tartar was, as its name suggests, raw chopped venison served on an edible leaf with the wild rice and sprinkled with turmeric. The taste was enhanced by the green shiso which gave it a kick. Finally the parsley and peanut, which sounds odd, but the parsley had been prepared into a bread and was topped with peanut paste and a whole nut. There was an element of optical illusion about the bread which looked as though it would have the texture of cinder toffee but was actually very soft and spongy to the touch and delicious. 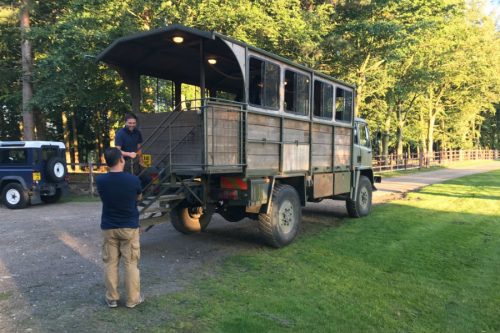 We were then shown to our first mode of transport of the night, an army type truck which had been converted into a basic bus. This added a huge element of fun to the proceedings and, as the seats were in the form of a long bench around the perimeter of the truck, we were all facing one another, thus giving us a chance to meet our fellow diners well out of our normal comfort zone.

After the spectacular trip through the Capability Brown designed grounds, we arrived at the Garden Lodge which was the venue for our next courses. This is a rustic building which had been turned into a dining room for the night and decorated with branches. There were two dishes to be sampled here. When we were seated, baskets of sourdough bread were brought for us to try with the three accompaniments already in small bowls on the table. 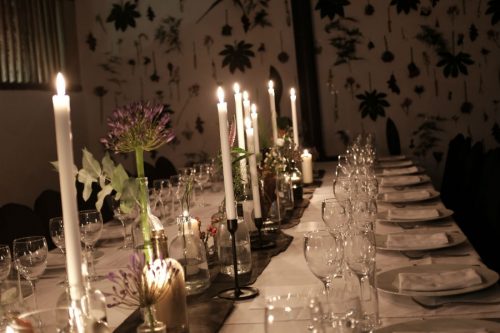 They contained toasted peanut oil, burnt butter with grated smoked venison heart and some crushed peanuts. The bread was either spread with the butter in the normal manner or dipped firstly into the peanut oil and then the peanuts, causing them to stick to the bread. As regular readers will know, I have loved sourdough bread since I visited its birthplace, San Francisco, in the late eighties, before it was readily available over here and in all those years I have not had any with the texture of this example. The crust was well done to the point of almost being burnt which made it crisp but the inside was light as a feather. The whole experience in the mouth of the bread, butter and dips was so good that it was difficult to stop myself from having a bit too much, so I didn’t!

The bread was followed by venison dumpling, woodland broth, fermented turnip and Kaffir lime. The large dumpling containing venison meat and offal was presented on a bed of the finely diced turnip and topped with the lime leaf. Josh then appeared with a saucepan containing the broth which he poured over the combination. Speaking of combinations, I don’t think that we eat anything like enough offal in this country. Okay, so it doesn’t look overly pretty in the butcher’s window but it is extremely nutritious and tasty. The dumpling was flavoursome with the various constituent parts combining to take a rustic concept to sophisticated heights. 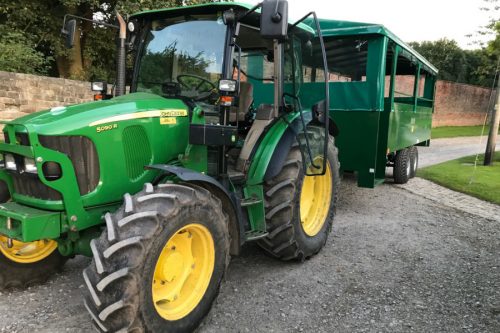 Time to move on again, this time in a trailer fitted with seats which was towed by a tractor. Night was just falling at this point and the journey was magical, if somewhat bumpy!

Our next stopping off point was the inappropriately named The Hovels. This is an ex-hunting lodge and the table was immaculately set for the last of the savoury courses, namely Harewood venison, Harewood lawar, perkedel and sambal matah. The venison came in two forms, a fillet which had been done sous vide before being grilled, and some braised shoulder.

The grilled meat was perfectly cooked being on the rare side of medium/rare, the braised shoulder was slow roasted and extremely tender with the most terrific flavour. Perkedel is an Indonesian potato cake using crushed vegetable rather than mashed, and the accompaniment of mixed bean salad contained the sambal matah which is a form of chilli, which whilst hot was not overpowering. 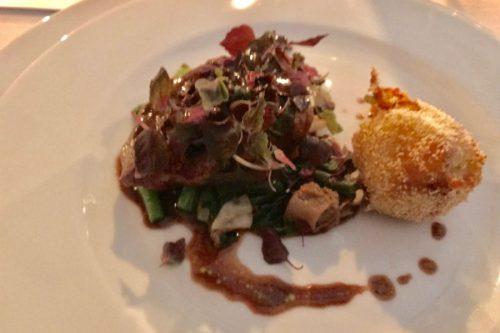 As I mentioned earlier, there are stories behind some of the food which make it unique and the one behind the venison was that the meat was from some red deer which had broken free from the park and done a runner. This meant that during their period of being fugitives they were foraging on whatever they could find, thus giving the meat its special flavour.

Time for dessert which was Harewood Mulberry Tree, an ice cream made from the fruit of a hundred year old mulberry bush saved from destruction by the food project. It was served with fermented blackberries and syrup. It was a fitting finale to a superb meal. But wait! There is more.

Back on the original truck we were taken to a dropping off point a short walk from a small bandstand-like structure which had been fitted with a bar for the event. The pathway from the bus to the bar was lit by strings of bulbs and the trees by changing coloured lights. It was now totally dark and the walk seemed to be the most perfect way to end the evening but, there was another surprise to come. At the bar there was a selection of petit fours. There were banana and turmeric along with pear, pandan and palm seeds and finally chocolate and tamarind. All superb. As well as the temporary bar they had installed another gazebo with chairs, sofas and wood-burning cauldrons. It was truly a wonderland.

All in all, the food, setting, concept and hospitality made this a magical and memorable experience.

Tickets for the next event, Winter in the Woods are available now: exploretock.com/harewood