Leeds and Beyond – Farmers Market 6 : Kirkstall

Kirkstall Abbey must be one of the most spectacular settings for any market in the country.

It is an amazing place, which I already knew, but what I didn’t know was that the stalls would be in the Abbey itself. The website made it look as though it was in the car park near the Abbey Museum at the other side of Kirkstall Road. To call it a farmers’ market is stretching the definition somewhat as there are only a few stalls selling field to plate produce, the majority being jewellery, clothes and gifts as well as hot food outlets.

I spoke to the owner of the Market Garden Leeds stall who said that it was once just produce, but has grown a lot over the past few years. Having said that, the genuine artisan food stalls were the most authentic I have come across thus far in this series. The aforementioned Market Garden Leeds had a fine array of locally produced fruit and veg, along with more exotic produce such as bananas and oranges which are obviously not indigenous but are obtained from local importers.

Wildcraft Bakery sells an assortment of gluten free cakes which are baked on Meanwood Road. It is great that those with allergies have someone on their side when it comes to naughty food, although food intolerances are not essential to be able to enjoy them. Another artisan producer is Slow Rise Bagels who bakes just off York Road and sells his bagels either au natural to take home, or made up as sandwiches. Brown and Blond, the brownie maker and a regular at farmers’ markets, were in attendance as was the other stalwart, Olianas, the cheese maker and Italian baker. 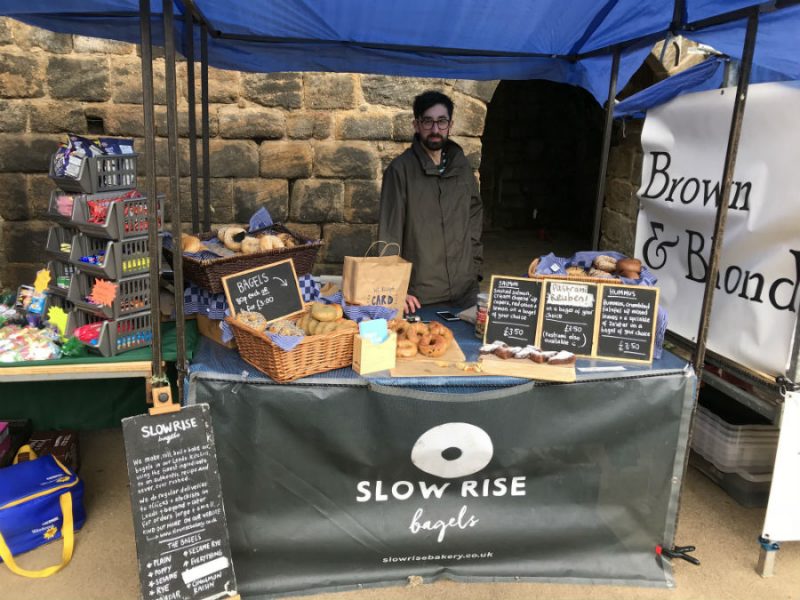 There were some stalls which I had not come across in the markets I have visited so far such as The Little Badger Cider Company of Holmfirth. I had a sample of their scrumpy so please excuse the shaky handwriting! Cryer and Stott, the cheesemongers, was another stall new to me. They are based in Allerton Bywater and as well as the cheese they had a selection of chutneys, sausage rolls, eggs and even joints of meat. The neighbouring trader was The Yummy Yank with their range of calorie-laden cakes labelled as ‘Classic American baking with a twist’. There were brownies, containing over a kilo of chocolate in every tray of 20, cheesecakes and other goodies all made with real butter, free range eggs and pure vanilla. I averted my eyes and walked smartly past! That didn’t do me much good as the next stall was Miller Soucre who purvey even more cakes ‘Delivering the delights of Afternoon Tea to you’ along with pink lemonade and various cordials. Finally, I came across one of the most interesting stalls I have seen anywhere, and one which I will see nowhere else in this series of farmers’ market reviews, that of Kirkstall Allotments, locally grown produce having travelled ‘One food mile’.  As the name suggests, the food sold here is grown on the local allotments and the gardeners take it in turn to ‘volunteer’ to run the stall, thus ensuring a home for their spare produce. They do not grow anything especially to sell here, but use it as a way to make their excess of fruit and vegetables available for purchase rather than let it go to waste. It also means that they don’t have to eat courgettes for breakfast, lunch and dinner when they are in season. It is ironic that this stall is on the market which is least devoted to ‘real’ food.

Kirkstall Abbey Market is a great way to while away a few hours by shopping, snacking and touring the Abbey itself. It is held on the last Saturday and Sunday of each month between March and November, from noon until 3.00pm. The Abbey was originally home to Cistercian monks, so why not do as the residents did and get into the habit. 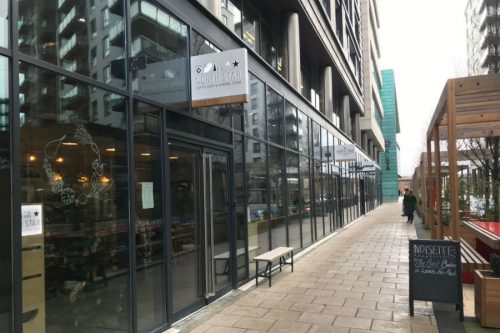 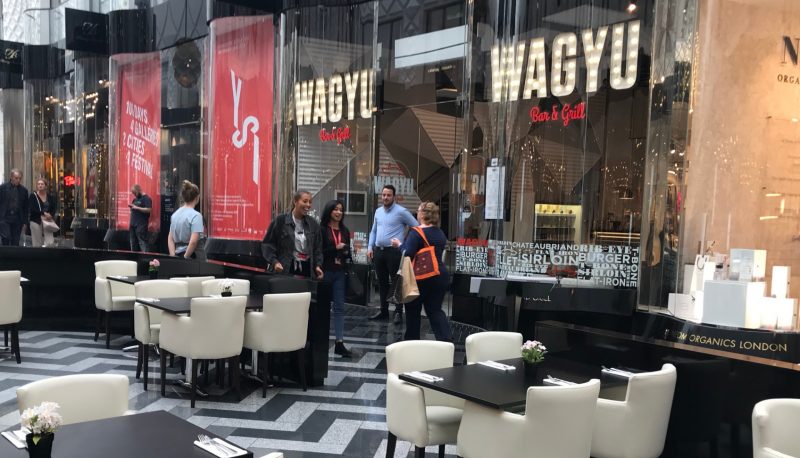 Let’s Do Lunch at Wagyu