Kirkgate Market – Steeped in history and keeping pace with change.

Apart from the Town Hall, I doubt that you could find a building in Leeds more iconic than Kirkgate Market. There cannot be an inhabitant of the City who has not set foot in it at one time or another. It has an amazing history and at one time was the largest indoor market in Europe.

My personal connection with the place is that my great-grandfather once owned most of the stalls on what was then Pet Row, but sadly he had to sell them off over the years. The market has obviously changed a lot since those days and the ‘Rows’ have disappeared with the stalls being mixed together rather than each type of produce having their own section. Being an inner city kid and going to school in the centre of town, I was used to the metropolis, and my job every Saturday morning was to go to the market and get the weekend groceries; not bad for a 12 year-old.

My first stop was always Butchers Row where I would have a wander up and down looking for the best piece of silverside or hindlift available for the money. My father had given me a training course on meat buying so I knew which butchers to use and which to avoid. Bear in mind that it was 1962 so things were a lot different. The main no-no was the ‘band saw butchers’ who would get their meat in frozen blocks and cut them with an automatic saw, leaving them in the window to thaw out so that they looked fresher. The other thing was the display lighting. He told me always to look up to see the strip light at the top of the window which would either be plain white, which was good, or red, which was bad as this was there to enhance the colour of the meat. I also bought the bacon and sausage for Sunday breakfast from them. I used to be a bit naughty as the butcher would tot up the bill on the wrapping paper in pencil,so after I left I would tear that corner off and mentally add a tanner (six old pence) as agent’s fee. This, along with the four pence I saved by walking rather than catching the bus, would buy me a coffee in Lewis’s department store, or Schofield’s if I was feeling posh.

The instructions for buying the vegetables were just as precise, being to make sure that I chose the ones I wanted and not to let the trader palm me off with the substandard produce hidden behind the immaculately displayed veg at the front. My father was a great cook and experimented with food, so I would also be told to see what looked good at the Polish Delicatessen, which must have been the first of its kind in Leeds. It was on the Top Row and the smell was amazing. Ah!  The memories.

I should imagine that the thing for which Kirkgate Market is most famous is that it is the birthplace of Marks and Spencer ,who opened their Penny Bazaar there in 1884 as a sort of nineteenth-century Poundland. They still have a presence in the same spot, but now selling food. I thought that I would have a word with one of the longest standing firms in the market so made a beeline for R Bethel, the fishmonger. Once again the stall is on what used to be Fish Row, but now is a mixture of traders. The business was established in 1911 and is still run by the same family.

Joseph Laughton is the current proprietor, having taken over from his mother and father when they retired a couple of years ago. He is a passionate market man and still as enthusiastic about the fishmonger profession as his ancestor must have been when he set it up. I asked him what it was that got him up every morning to come to the market and he said that there were several reasons: the first is that he feels that he has a responsibility to his loyal customers and to the people who work for him.  Secondly, he enjoys keeping up the family tradition and finally, he enjoys giving people what they want by filleting the fish to order and preparing it especially for them.  Whilst I was there a lady asked for some salmon and he asked if she would like him to pin bone it for her.

He had strong views about the organisation of the market, complaining that millions had been spent on a revamp but they failed to fix the roof, which still leaks. Although a long established trader, Joseph is forward-looking and welcomes the space at the bottom of the market which is used to house street food outlets as they bring in a new type of customer. He also embraces the thriving restaurant scene in the City as it has made his catering arm into what he calls ‘the restaurants’ larder’, as the eateries can order their fish from him and have it delivered several times a day when it is needed and not have to keep a large stock of perishable food. I enjoyed our chat very much and with his attitude I am sure that the future of the business is secure. I also enjoyed the piece of halibut I bought from him, I can’t remember the last time I saw such thick steaks of my favourite fish. 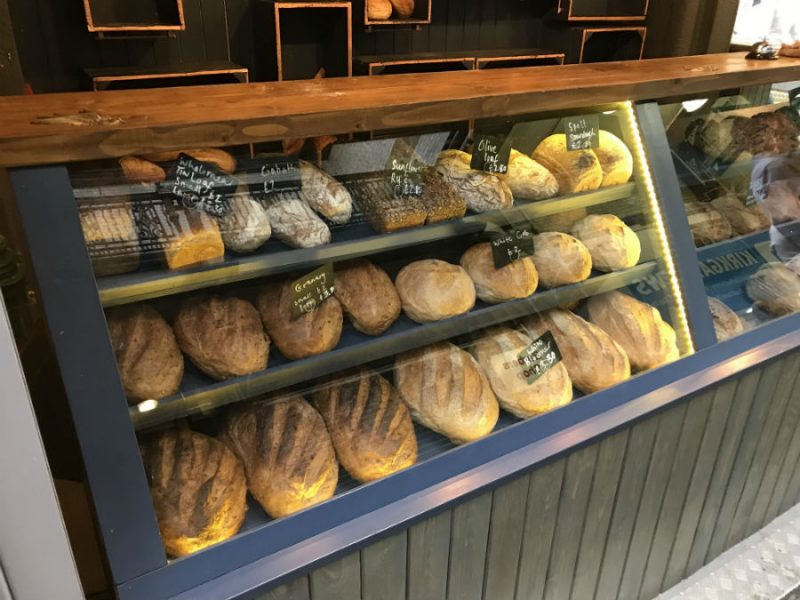 After my conversation with one of the longest established stallholders, I went to seek out one of the new kids on the block in Bluebird Bakery. This is an example of the artisan bakeries which seem to be springing up all over, and was founded in 2011 in York by Al and Nicky Kippax, who sold from a market stall there.  They now bake in Malton where they also have a shop. Bluebird use local organic flour and employ long fermentation methods, which means that they don’t need flour improvers, saturated fats or other additives. The range of products covers various sourdoughs, a cob, baguette, focaccia, granary, bloomer and tin loaf, among others. Their speciality is ‘The Golden Kamut’ but it is only available when they can get the flour. Pastries and sweets are not overlooked so they have all of your bakery needs.

Kirkgate Market is not content with relying on its history and is embracing change, which is reflected in the range of traders. As well as the food and florists there is now a proliferation of mobile phone accessory and electrical shops, along with textiles, perfume and gifts. Even the food stalls have adapted to the more exotic tastes of today, with butchers selling goat meat and greengrocers purveying fruit and vegetables needed to prepare recipes seen on TV, or tasted in the City’s international restaurants. 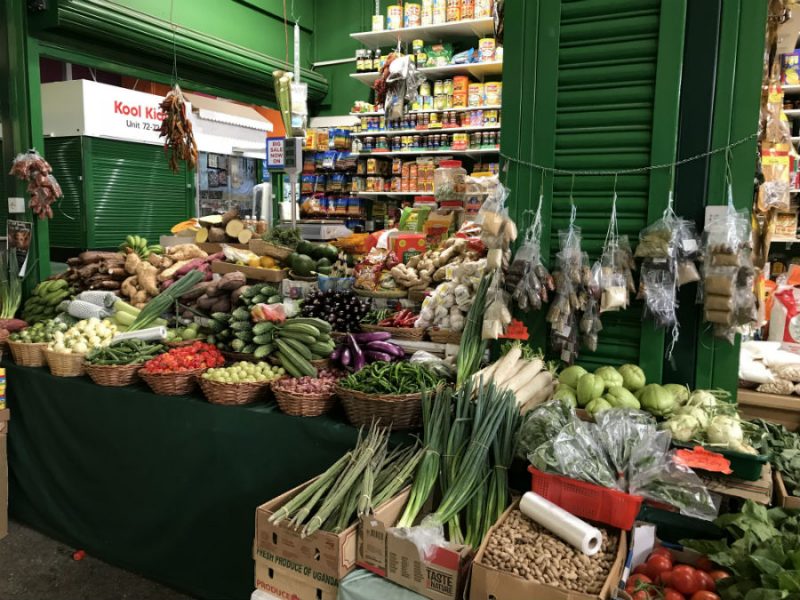 A further revamp is beginning to improve the market even more in this competitive world of retail.  Let’s hope that they get the roof fixed.