Let’s Do Lunch at Bill’s

Stan heads to Bill’s restaurant for his lunch this week, where he samples the Cumberland sausage, as well as the ham hock terrine.

It is not often that I have the opportunity to dine in a building with a ‘Blue Plaque’ outside. To be fair it is a Leeds City Trust plaque but a plaque it is. Its purpose is to point out that the impressive house in which the restaurant is situated was built for a William Hey in 1794-5 by the architect Thomas Johnson. William Hey was ‘one of the founders and later Chief Surgeon, of Leeds General Infirmary.’ The restaurant in question is called Bill’s. Initially, I was under the impression that it was named in honour of the aforementioned medic but it turns out that this is not the case. It is  just as well really: with the status of the medical profession in the 18th century I am sure that, had he still been practising, he would have given the owner a voucher for a free castration, to be done late in the day when the operating staff would have been high on ether and the scalpel blunt from a hard day’s hacking.

What to expect from a restaurant located in a doctor’s house? Perhaps hospital food. I have mixed feelings about such fare, having been fed dry cream crackers, which seemed like razor blades, after I had my tonsils removed in 1954. I was also given ice cream, which helped a bit. My other recollection was not so much about the food as the drink. In 1969 I had cartilage removed from my knee which, in those days, meant ten days in hospital and two weeks on crutches with a full-leg pot. Whilst enduring the first part of that there was a trolley service which provided the normal meals, but before lights out, you were offered a choice of tea, coffee, Horlicks or Guinness. As this was a men’s surgical ward and no one was ill as such, there was a lot more of the first three items returned to the kitchen than the last one. Medical science may have come on in leaps and bounds during the years since then but you can’t get hammered on the NHS anymore. 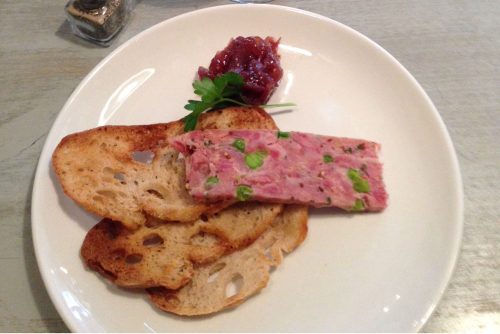 I visited these premises as I spotted a special lunch menu, and given the title of my reviews it seemed to make sense to check it out. There was a choice of two courses for £10.95 or three for £12.95, and a choice of four items per course. There are vegetarian and gluten-free choices on each course as well, which is good. I began with the terrine of ham hock and peas which was served with Bill’s chutney and three thin slices of sourdough toast. The size of the terrine was roughly equal to one of the slices of toast which, being sourdough, shattered when I bit into a slice. The terrine was very good, made from chunks of ham hock and a liberal smattering of peas. Bill’s chutney was a sweet concoction, the main ingredient of which was small rings of onion. It was a safe accompaniment but if it works, and it did, there is nothing wrong with safe. As the weather had turned somewhat chilly outside I spurned the salad dishes in favour of Cumberland sausage, puy lentil and parsley stew with red pepper tapenade and horseradish dressing. My editor, Mags, is quite rightly very keen on correct punctuation, and this was a perfect illustration as to why it is important, because the dish was not a stew of the three main ingredients but a grilled or fried Cumberland sausage on a bed of lentil and parsley stew. Drop ’em a letter Mags!  Editor’s chip in:  Cumberland sausage with puy lentil and parsley stew, then. 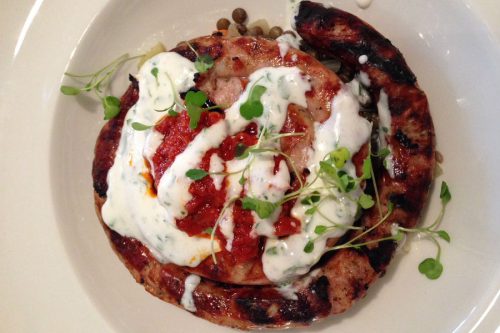 The sausage was a little thin for Cumberland and, although spicy, there seemed to be a disproportionately large amount of skin to chew. My other quibble is that the stew was overpowered by celery, which doesn’t get a mention on the menu. I love lentils as they are great at absorbing the taste of whatever they are cooked with, but in this case that particular characteristic was its downfall as there was no variety of taste. Luckily the tapenade and horseradish were on hand to break up the monotony. I had a glass of a very pleasant house red, a tempranillo garnacha, to accompany the dish. (£4.35 for what looked like 125ml although the size was not specified on the menu nor the bill – no pun intended.)

Because I am a professional, I went for the three-course option and chose the treacle tart with lemon creme fraiche. This was the surprise package of the lunch. I had expected a French style of tart with a sweet crust filled with a shallow portion of the treacle mix but what came was an oblong shade thin pastry base with a really thick treacle flavoured topping crowned with a quenelle of lemon flavoured creme fraiche and a sprig of mint. It was served warm and was excellent. The lemon cut through the sweetness of the treacle and had the topping been cream rather than creme fraiche it would have been too sweet and heavy, but this worked a treat. I ended with my usual black Americano coffee at £2.10 which was full bodied but not bitter. A ‘discretionary optional 10% service charge’ is added to the final total but as my waitress, Ella, had done a very good job I saw no reason to ask for it to be removed. 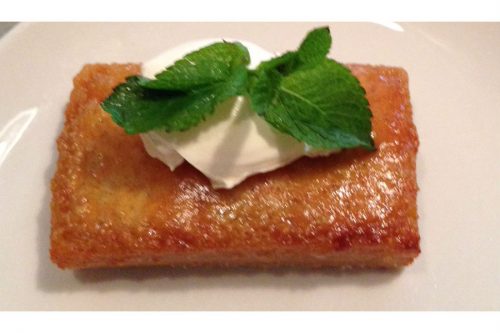 I enjoyed my lunch at Bill’s very much but the trolley with the free Guinness never materialised.