Let’s Do Lunch at Eat Your Greens

In the words of another grumpy old man, ‘I don’t believe it!’  I have battled my way through countless vegan and vegetarian meals and one of the best I have had so far is here at Eat Your Greens, which is not a vegan or vegetarian restaurant.

I will repeat that:  Eat Your Greens is NOT a vegan or vegetarian restaurant.  They cater for everyone.  I promised Oliver, the chap who was running the place when I called, that I would make that perfectly clear. It has to be said that the menu is heavily skewed towards plant-based food, but there was chicken, fish, and even wood pigeon on the menu.

The reason I called was that I wanted to balance my reviews and so needed to go meat-free for a change.  I now know how vegetarians must have felt in days of yore when dining out with omnivores, but the choices I was given far outshone some of the reverse offerings.  I remember in the sixties, if you were a veggie you were given the roast beef and two veg but without the beef, or gravy!  The first ever vegetarian eatery I remember was called Cranks, the irony of which speaks for itself.  As I was here and the menu looked interesting, I thought that I would give Vejuneuary a try.

The next thing which needs to be said is that the meals on the menu are not imitation meat dishes but have been assembled to make use of the great flavours which vegetables have to offer.  When I go for a beer I want a properly brewed one and not an alcohol free version. I don’t want a glass of Ribena with vodka when I order red wine, so why do very competent chefs spend hours doing experiments with jack fruit and whip up the juice from cans of chickpeas to make pretend junk food?  Not only do they not taste remotely of the real thing but I am also sure that they put people off becoming vegan if that is all there is on offer.  Would anyone swap a proper veggie diet to live on Big Macs or chicken nuggets?  I wouldn’t. When I arrived I noticed that there were quite a lot of people still there; it was the fag end of lunchtime, but the layout of the place with the bar being an island in the middle, breaks up the space, so it seemed quite empty.  I took my seat and was brought a set of menus.  I normally buy from the lunch specials, but as there was only a choice of three sandwiches I ordered from the Big Plates section of the main bill of fare which looked a lot more interesting. The menu obviously changes with availability as Jersey Royals were included on one dish and they have a very limited season.  Eventually, I decided on Black Pepper Swede, described as Fried black pepper, swede and pea flour bake, wholegrain quinoa pilaf with chilli, mixed seasonal greens and house kimchi, £10.

A very pleasant waitress brought me a carafe of water and a glass without having to be asked, and took my order for the food and a glass of red house wine, a Tempranillo at £4.50 for 125ml.  A short time later the goodies appeared. The cubes of swede were golden brown, crisp on the outside but fluffy in the middle, just like the best roasties you have ever had.  They were also very hot, so I worked my way around the rest of the components to let them cool down a bit.  The mixed seasonal greens were kale and small onions.  The texture of the kale was so much different from the swede, having cooked but still crunchy stalks and soft wilted leaves.  The quinoa grain was still whole grain, which again gave it some resistance to the tooth – did I just write that?  Finally, the kimchi was taking no prisoners whatsoever, having a kick like a mule but a very refreshing one, cutting through the warm comfort of the rest.  The whole balance was brilliant.  The wine was very smooth – I am a fan of the tempranillo grape but it’s not often you get an Austrian example like this Wagram Zweigelt and, even rarer, an organic version coming in a bag. 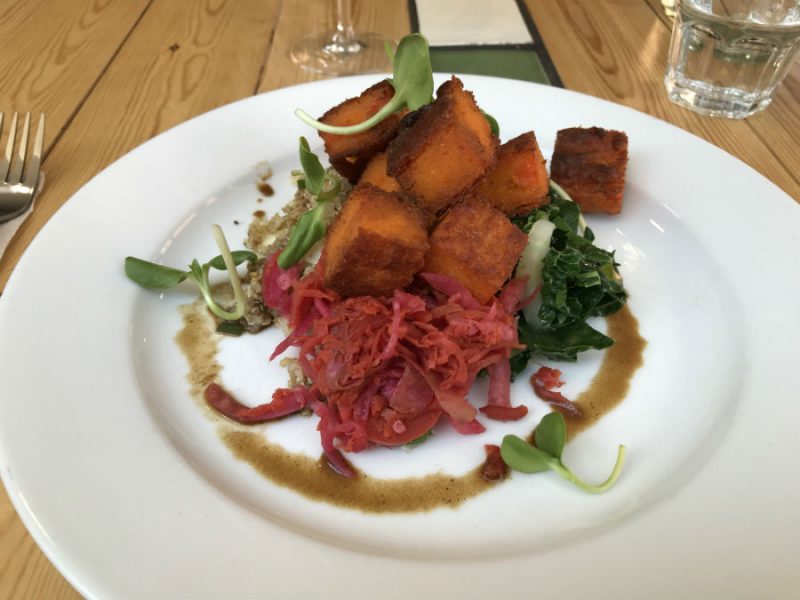 For dessert I chose one scoop of rhubarb sorbet for £2 (3 scoops are £5) which was not totally smooth but had some larger ice crystals to give it texture and interest.  The rhubarb certainly came bursting through. A black Americano for £2.20 arrived in a large mug, which gave me a chance to sit and reflect on the wonderful things which can be created from vegetables when you have the flair and imagination to use them as they were meant to be.  A further side-effect of this was that my appetite was satisfied but I didn’t feel as though I had eaten a ton of stodge.

If you should pay a visit to this place, and why wouldn’t you, then try something a bit different, but if you do decide on the meat or fish, don’t forget to eat your greens.