The other week I was wallowing in self-satisfaction, having just finished a review of the final outlet in Assembly Underground.  I was feeling as smug as a trainspotter who’d ticked the last loco off in his Ian Allen guide.

It wasn’t to last long though, as a couple of days later I had an email from my copy editor asking if I’d seen that a new noodle bar had opened in that self-same venue.  I said that I hadn’t but would pop along to have a look and hopefully complete my collection once and for all.

I have had oodles of noodles lately, emanating from China. Thailand, Japan and Vietnam, so am becoming quite the expert.  I even had tagliatelle at the last Italian I reviewed. The new gaff in question is Holy Ramen and, although based on the Far Eastern dish of that name, the owners are at pains to point out on their website that theirs is an improvisation and can be altered on a whim, as opposed to slavishly following one of the original recipes. Their aim is to provide ‘soul in a bowl’. Funky!  Off I went to Assembly Underground, safe in the knowledge that if the eatery was not up to muster I could work my way through the beers on offer at Vocation as consolation. I need not have worried.

As you would expect from a street food outlet, the menu is short and to the point, with three variations of the eponymous dish. Reading the bill of fare is like choosing an episode of Friends to watch as they are listed as: The Chicken One, The Vegan One and The Special One. Thankfully, or otherwise depending on your footballing allegiance, the last one is not made from bits of Jose Mourinho but is a weekly-changing concoction.  As well as the Ramen there is the option of a Dim Sum Sharing Plate For Two. Once again I opted for one of those on permanent offer, viz, The Chicken One at £8, and added the supplements of Miso Infused Egg for £1 and a Dim Sum Side at £2.50. The Chicken One, aka Ol’ Dirty Chicken, is described as 24-hour Chicken Broth, Chunks of Sesame Chicken, Smoked Bacon Dashi, Noodles, Fresh Pak Choi & Chilli & Spring Onions, Nori and Garlic Oil. That seemed to have all of the flavours of the Far East covered in just one bowl and so it turned out.  They sell soft drinks but I couldn’t go to Assembly Underground without having at least one beer from Vocation Bar. So I did. As with a lot of Far Eastern food, especially Thai, everything is served in one dish, which is a great idea.

Ramen is the name of a variety of Chinese noodles and the broth in which they are cooked, being later picked up by the Japanese and other oriental nations.  Judging by the nori present in this version I imagine that Japan is the base for the recipe, but like most foods it develops as it travels the world, being constrained by the ingredients available in its new home. Thankfully, we can now buy most of the things we need to cook exotica from the local supermarket and if that fails, a specialist shop of which there are many in Leeds.  Just take a walk along Vicar Lane between the Headrow and North Street. 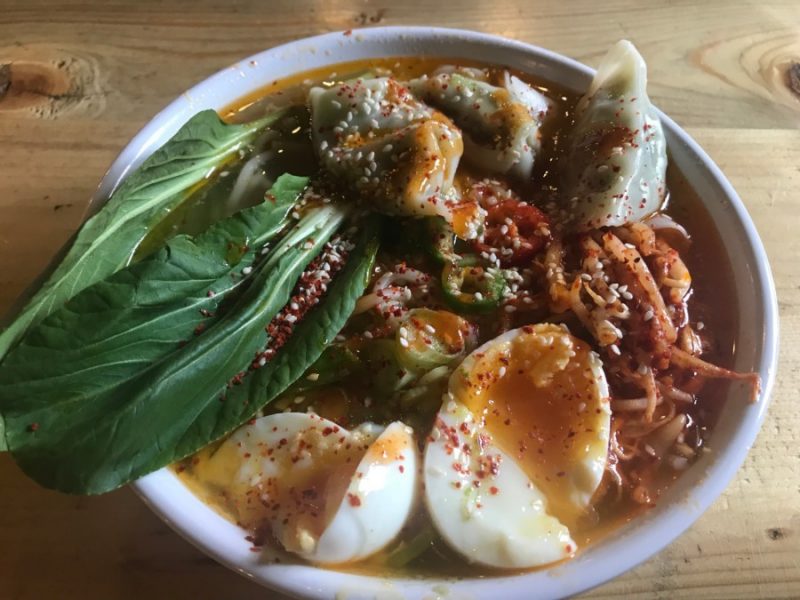 The problem with a lot of broths is that the last spoonful is exactly the same as the first, with all of the ingredients mixed together.   That was most definitely not the case here as all of the constituents had been placed into separate parts of the bowl, ensuring that even the liquid had a distinctive flavour, depending from which side of the bowl it was sourced.  As is my practice, I worked my way through each of the individual parts before I got down to eating it like a ‘normal’ diner, which meant that I spoiled it a little bit. The first dim sum dumpling I tasted was perfect, being soft with a tasty filling, but by the time I had came round to my second and third pieces, they had continued to cook in the liquor and disintegrated somewhat when attacked by the chopsticks.  Totally my fault. When I had worked my way through the perfectly soft boiled egg, chillies, pak choi and slurped a fair amount of the broth and noodles, I realised that I had not come across any chicken. I stirred the remains of the dish with my spoon and lo and behold there it was lurking at the bottom. Unfortunately, this had the effect of mixing all of the tastes together and contributing further to the disintegration of the dim sum.  Let my experience be a lesson to you when you go (and you should go) and please eat the dish as it is presented. It will pay dividends, although I must say it was still extremely good the way I did it. Whilst being on the hot side, it was not a challenge and there were other elements of sweet, sour, salt and umami to savour. So, again, I did. Delicious! 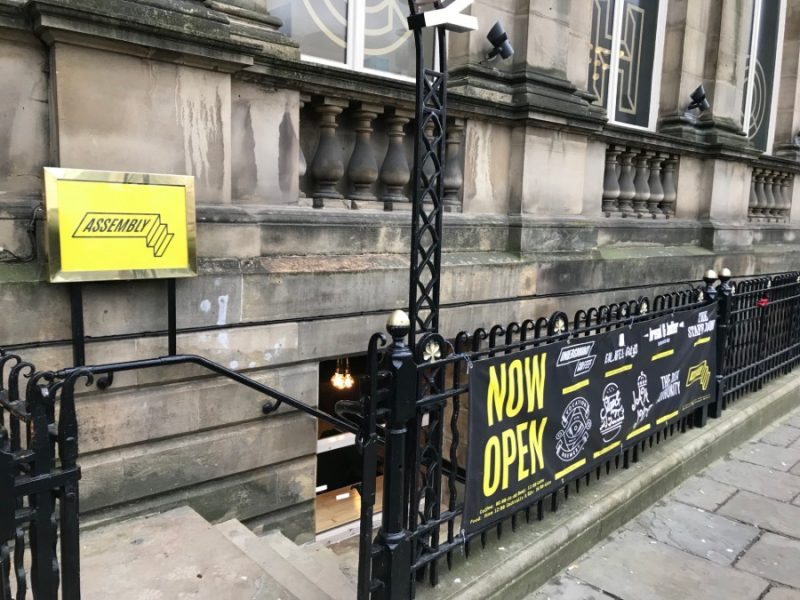 As I have mentioned, I have sampled noodle dishes from several sources over the past few months and this place is right up there with the best.  I spoke to the owner when I had finished and asked him whether there were any other branches. He said not but if this place turns out to be the success it deserves to be, I wouldn’t be surprised to see others popping up.  It might even be the beginning of The Holy Ramen Empire.