Let’s Do Lunch at Il Paradiso

Living alone I spend a fair bit of time planning my meals, from what to buy and when, to what to take out of the freezer and when.

After my lunch at Il Paradiso, the new Italian restaurant in York Place, I can turn my mind to other things, as I’ve worked out that the next time I’ll need to eat is a week on Friday!

Fortunately, quantity did not compromise quality in either the food or the service, both of which were superb. They do not do a lunch offer as such but have a deal which lasts all day Monday to Friday, giving a choice of one, two or three courses all at a discount.  I thought that I would begin with the two-course deal at £14.95 and convert it to a three-course for £18.95 by adding a dessert if I still had room.  As it turned out I didn’t, but I still did, if you get my drift.  Not only are the meal prices very reasonable by doing things this way, but the extras were also good value too, with my large glass of Trebbiano D’Abruzzo being £4.50 and a black Americano £1.85. 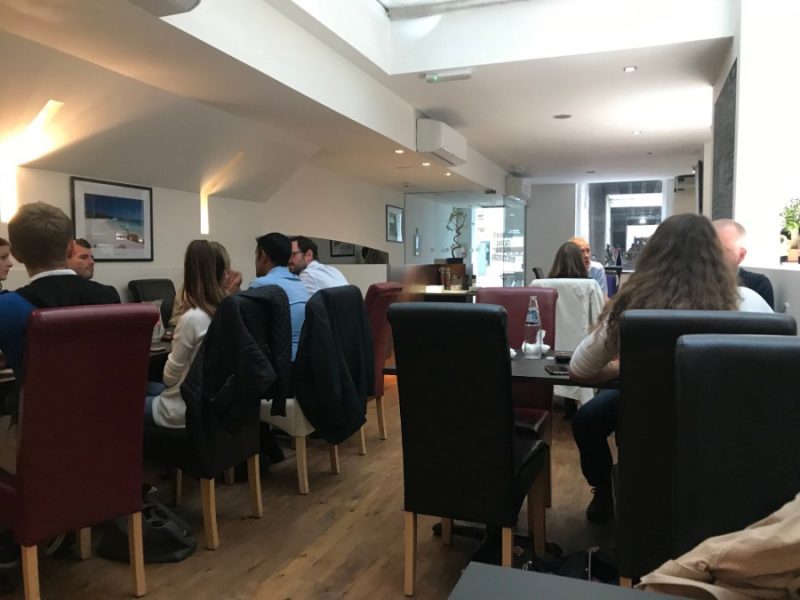 The first thing which hit me was the room itself – it is minimalist and cool as a penguin’s bottom.  The main sources of illumination are a large skylight supplemented by concealed spots.  The natural wood floors finish the effect. I was wondering if I could perhaps move in but sadly there are no rental deals as good as the food ones. 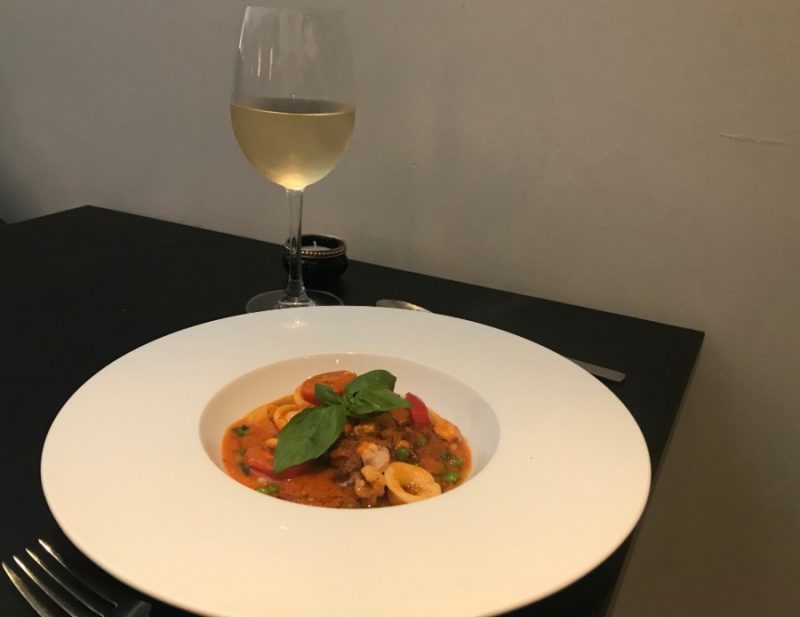 I have been eating more than my fair share of Italian food recently – not complaining,  just saying – so I decided to break free from the pasta/pizza cycle by going pescetarian for the day.  What a great decision. My first course was Calmaretti in Salsa, which was baby squid sautéed in tomato sauce with peas and chilli. Whilst this was being prepared I was presented with some pieces of Italian bread with a dip of olive oil and balsamic vinegar, along with the carafe of tap water which had already been provided whilst I perused the menu. The flavours of the dish were intense but complementary, with the squid being just on the right side of chewy. The peas were petit pois and had a bite to them, as did the miniature plum tomato halves and the odd piece of sun-dried tomato, with the chilli giving a subtle heat. Fresh basil leaves finished the dish off perfectly. Is there a better combination than basil and tomato? The sauce was so good that I used a couple of remaining pieces of bread to mop it up. I was obviously enjoying it as I was asked if I would like a few more slices. 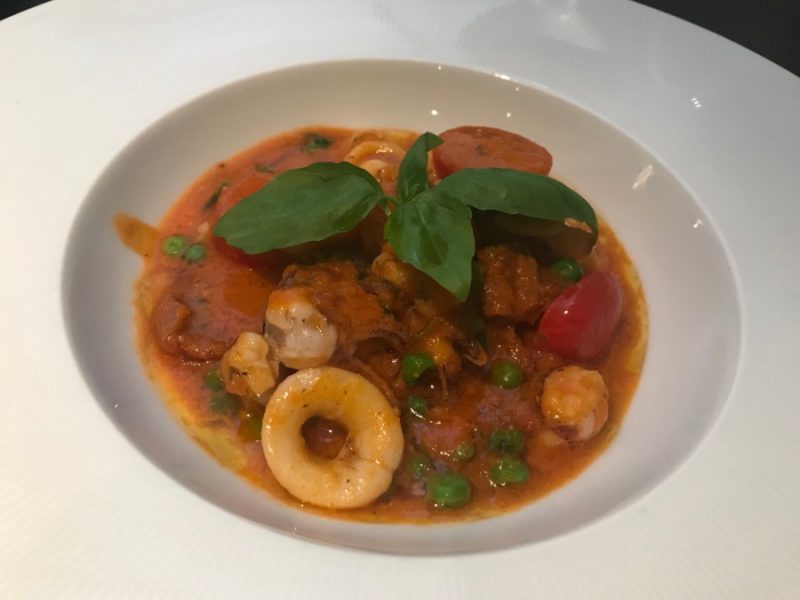 For my main course, I chose the Risotto Allo Scoglio, described on the menu as a ‘Fantastic selection of mix (sic) seafood, white wine, garlic and a touch of chilli’. This was spectacular in its presentation, with the selection of clams, mussels and squid being topped with a huge king prawn which looked like some sea monster emerging from the bed of rice.  The rice itself was perfectly cooked for risotto, being creamy but with still a good texture, enabling it to be chewed, rather than that of rice pudding. I normally find shellfish to be a bit of a faff but here some of the mussels and clams had been shelled for me with a few still left intact for presentation purposes. The prawn was the only thing which needed much attention but was easily shelled and even more easily eaten. I mentioned the service earlier and the level of this was illustrated by the wet tissue which had been provided when the risotto was delivered. It was obvious that when the time came that I needed to use it, my fingers would have been covered in sauce, so the plastic packet in which it was housed had been opened already so I just needed to extract the tissue. A small thing but details are what distinguishes the excellent from the merely very good. 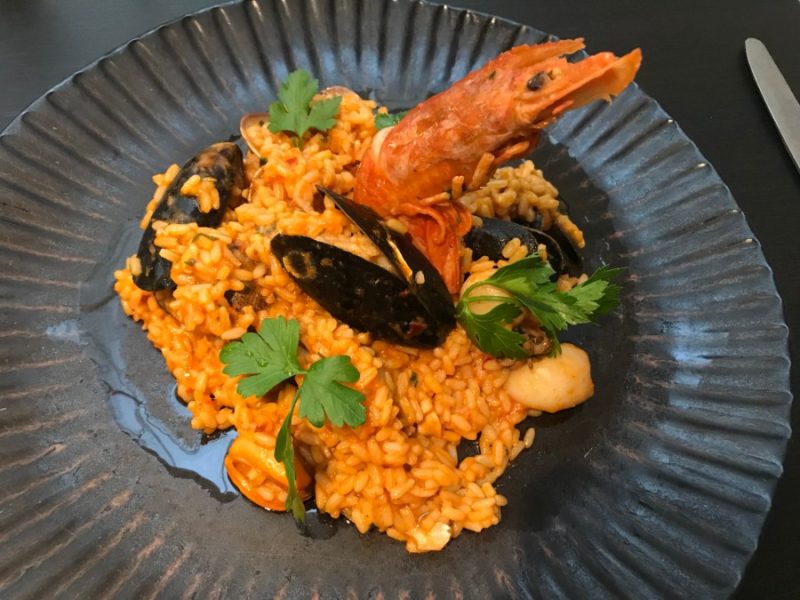 Although the portions were of a generous size I really had to try a dessert, so I was asked if I would like a little time before ordering, an offer which I eagerly took up.  When the time came I asked for Torta della Nonna, a flan made with pine nuts and served with cold lemon custard. Thankfully, the portion was of a more realistic size and extremely enjoyable.  I was asked whether I wanted my coffee with, or after dessert – another nice touch. 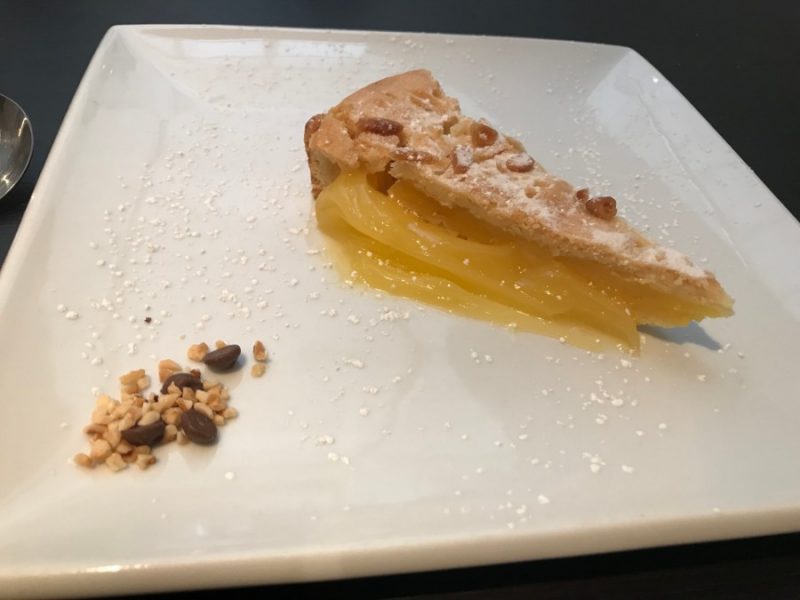 One final observation is that the food was not only very good indeed but the first two courses were also hot rather than tepid, which was a nice change. The problem with being a food writer is that by the time you have positioned the dishes in order to take a few photographs, they have almost gone totally cold. This is especially true for the lunch articles as I have to take the photographs discretely as I don’t want to be rumbled, which means I need to wait until I am unobserved by the staff. I am becoming very good at ostensibly reading my mobile phone while actually using the camera function. 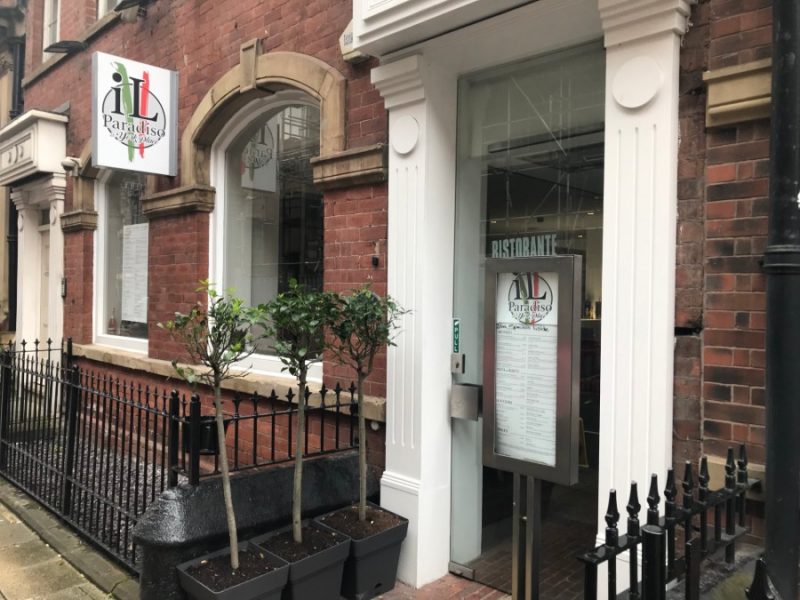 If you want to turn lunch into a special occasion whilst not breaking the bank, then this is definitely the place to go. If Paradise is half as nice as Il Paradiso, I will be a happy man.