Let’s Do Lunch at iroko

I had picked up on iroko (no upper case) through a newspaper article, so I thought I’d give it a try.  I nearly had second thoughts when I looked at the menu which is in two parts – breakfast and brunch.

The former is served from 9.00am until 11.00am and the latter from 11.00am until 4.00pm.  At 4.30 the cafe closes and reopens as a cocktail bar which serves small plates throughout the evening.

The reason for my apprehension is that I don’t understand weekday brunch. I believe it should be saved for those lazy weekend mornings after a long lie-in to slowly ease one into the new day and recover from the previous night’s excesses.  On examining the bill of fare more closely, I discovered that the items on iroko’s brunch menu contain dishes suited to lunching rather than being solely embellished breakfast fodder, so all was well.  My first disappointment of the day was that when I ordered ‘The Best Reuben In Leeds’ I was told that they had just sold the last one.  It was a disappointment in that I wanted to compare it with the Best Reuben In Harrogate, which, needless to say, is the one I construct as my Saturday and Sunday lunch of choice.  Undaunted, I went for the Karaage Fried Chicken Sandwich, which was described as being served with miso soy mayonnaise and pickled daikon on a soft roll. They were both £8 so that was fine.  To drink I had a black Americano at £2.70.  Karaage chicken is the Japanese version of goujons, in that it is small pieces of chicken thigh, complete with skin, coated in potato starch and deep fried.

Although a smallish cafe bar, it was table service, which was nice, as was the carafe of tap water which appeared without being requested.  The coffee arrived straight away, closely followed by the sandwich.  This was one of those unfeasibly tall constructions with a spike to hold it together.  Not complaining, just saying, so I took a knife and fork from the container on the table and proceeded to work out how best to attack it.  Eating it like a burger was out as I am not blessed with a detachable jaw like one of those snakes which can devour a rhinoceros in one gulp, so I picked out one of the chicken pieces to try on its own. 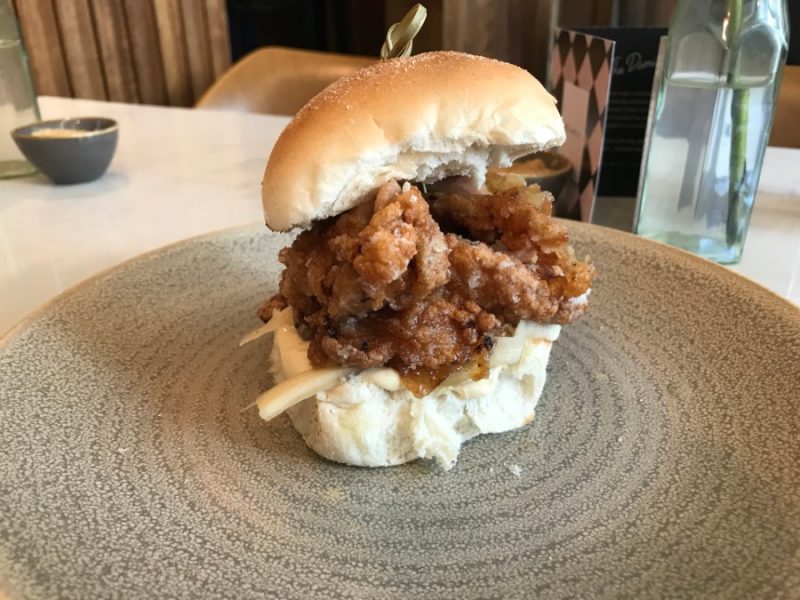 There are several versions of Karaage chicken, the more modern ones flavouring the potato starch with ginger and garlic, but these seemed to be the original unseasoned type as I was just getting the chicken flavour.  Being thigh meat they have a much deeper flavour than their fast food equivalent and a totally different texture, as the skin to meat ratio of the thigh is greater than that of the breast and it is soft rather than crispy.  All was well until I took a bite out of the second piece and found that it was red inside due to being underdone.  Thankfully, there was only one piece of this nature so I reassembled the sandwich, picked it up and tucked into it as it was meant to be consumed. The base of the bun was covered in the soy mayonnaise and pickled daikon, which gave it a couple of different textures; smooth and crunchy, and tastes; creamy and tart.  Daikon is a large, mild radish which takes well to being pickled, at least this one did.

When the waiter came to collect my plate he asked me how everything was and so I told him about the offending chicken piece.  He apologised profusely and returned a minute or so later having spoken with the chef who assured him that the chicken had been probed with a thermometer and registered the required temperature.  I have no reason to dispute this but only know what I saw.  Anyway, pudding beckoned.

When I browsed online, I had seen no mention of desserts, so I thought that lunch would be a relatively low calorie affair, hence the coffee rather than my normal alcohol fix.  After the mayonnaise and the chicken skin, all good intentions had been banished so the sight of some carrot cake on the counter was too much to resist. Thank goodness it was. I am a carrot cake aficionado and I can confidently say that this is the best piece I have ever had.  It was moist, packed with so much fruit and nuts as to make any self-respecting Christmas cake envious, and smothered in a thick creamy topping. Apparently, all cakes are baked in-house so the chef deserves high praise for this. 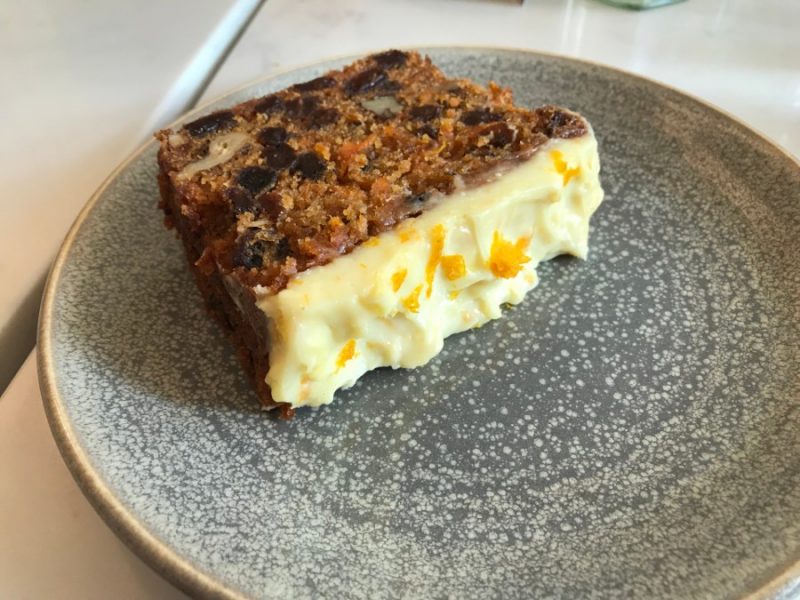 I questioned the amount when I was presented with the bill, as I had only been charged for the sandwich. The waiter told me that the coffee and cake were to make up for the chicken.  No matter how much I protested and told him that it was only one piece, he was adamant that he would only charge me the £8.  This means that I have no idea how much the carrot cake was, but whatever the price, it was worth every penny.

I’ve said this many times in the past and will probably have cause to say it many more times in the future:  anyone can look good when all is going well; it is how a place handles mistakes which counts.  This is proper food rather than processed stuff from catering packs or supplied by a franchisor, so occasionally things can, and do, go wrong.

The service could not have been better and everything was handled very professionally. Thank you very much.