Let’s Do Lunch at Mr Mackerel

In May 2018, I ticked one more item off my bucket list when I visited Istanbul.  To be fair, this is about my third bucket list as I have been fortunate enough to do lots of stuff I never thought possible, so I am now looking for stuff that I didn’t really want to do but it would be nice if they happened.

Going to Istanbul meant that I could experience a culture different from my own, set foot in Asia, a continent I had not previously visited, and sample some amazing food.

As you will probably remember, May 2018 was at the beginning of the tremendous summer we enjoyed, or endured, depending on your point of view, so I was worried that Turkey might be a bit on the hot side.  I needn’t have fretted as I experienced five days of almost non-stop drizzle.  It was warm drizzle I grant you but drizzle nevertheless. Of the many types of food I sampled, one of the most memorable was the hot fish sandwich bought straight from boats moored on the quayside of the Bosphorus. The craft were highly decorated and had hotplates on which the fish, mackerel, were cooked.  They were served in half a baguette with raw onions and lettuce.  When I bought my sarnie and sat at one of the nearby tables, a vendor arrived with a tray full of plastic cups containing a claret-coloured liquid with chunks of what looked like fruit in it.  I thought that it looked pretty refreshing so I bought one, only to discover that it was pickles. The liquid was some sort of vinegar and the ‘fruit’ small pieces of cucumber. I was given a fork with which to extract and eat the veg, which came as a great relief as I didn’t fancy drinking it.  To say that the pickles were strong would be a bit of an understatement and for the rest of the afternoon I looked as though I was playing the trumpet without noticing that someone had stolen it.  The fish sandwich was excellent, although not fully filleted, so a game of spit out the bones ensued.

Fast forward to December 2018 and I am in the street food section of Leeds Kirkgate Market, queueing at the stall of Mr Mackerel which advertises the same delicacy.  They sell lots of other Turkish dishes to eat at either the communal tables or to take away to enjoy al desko.  The service in Istanbul was instant but sadly in Kirkgate Market it was painfully slow.  I must clarify that this was nothing to do with the efforts of the staff on duty, but by some inconsiderate jobsworth of a food inspector who had chosen 1.00pm to bring proceedings to a halt whilst he had a thorough look at all of the equipment, meaning that my wait was over 20 minutes.  Others in the queue who were on fixed lunch breaks peeled off and bought their food at one of the other stalls.  So much for Leeds Council encouraging business! I’m sure that the job could have been done after 2.00 when the place had quietened down. I was eating with a colleague who had gone for a pizza to another stall and so by the time I joined him his lunch was stone cold. What a gentleman for waiting.

While the manager was running around complying with the inspector’s wishes, his assistant was doing a sterling job, making up the orders as best he could with the other two seemingly permanently in his way.  He soon had the sympathy of all of us who were present, except for the white coat of course.  Anyway, eventually my sandwich arrived and I was asked if I would like salad on it.  I declined as I wanted to taste the fish unadulterated and didn’t want to complicate the process of deboning it should that prove necessary. He was more than happy to put the salad in a separate container which was a lovely gesture, unlike the ones which some of my fellow queuers were by now flicking to the food inspector.  The cost of this was £3.00; amazing value.  To drink I had a fresh orange juice at £2.00 which was squeezed before my very eyes, so I was sure that it was not some kind of pickle. 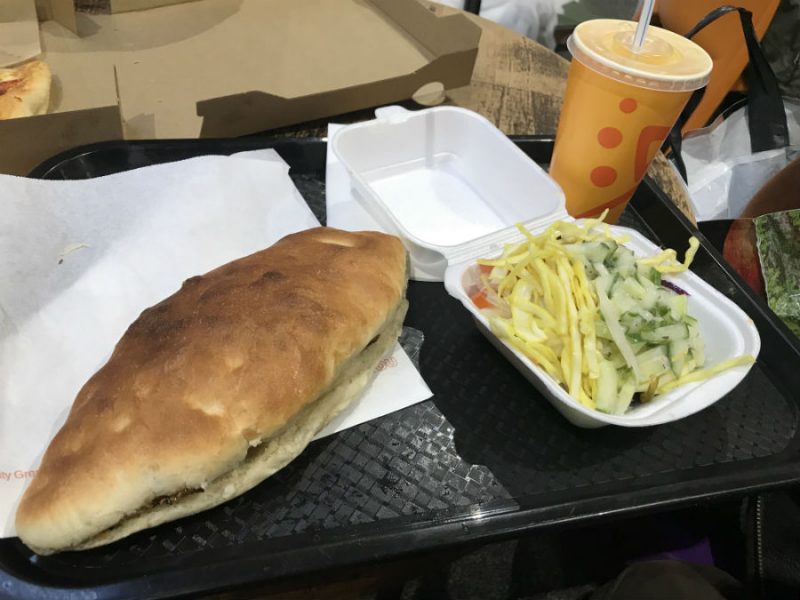 The bread in which the mackerel was served was more like a focaccia than the baguette I was expecting and was lovely and soft – very tasty in its own right.  It is not often that you get food at home which is as good as the native version and this was no exception – it was much better.  Not only was the bread sublime but also there were no bones in the mackerel and the salad was a lot more comprehensive than the authentic raw onion and leaves.  I cannot get over the value for money which this gave and I would be only too pleased to recommend the place to anyone.  Should you pay a visit and see someone in a white coat behind the counter I suggest that you make alternative arrangements for lunch, or order so that it is ready for teatime.