Let’s Do Lunch at Nation of Shopkeepers

This week, Stan Graham runs into a spot of bother with a burger at Nation of Shopkeepers.

Well, my luck had to run out sooner or later. Of all the reviews I have done so far I have not had a bad meal. I had a Chinese which was not great but not a bad one. Unfortunately, the lunch I had at Nation of Shopkeepers had only one thing going for it and that was Stacey the waitress. I have said before on this website that I judge a place on how they handle the situation when something goes wrong, although this doesn’t excuse a bad experience, it only mitigates it.

I had decided that I was going to have a burger when I next did lunch as I have ignored them so far. I looked on the websites of the contenders and saw that Nation of Shopkeepers did a fair range and they also sold fried pickles, a delicacy to which I had become addicted when staying with friends in Kentucky. When I entered the premises I went to a table to peruse the menu and, after deciding on the pulled pork with smoked chipotle sauce and a side order of the aforementioned pickles (£2.95), I went to the bar to place my order. As I approached, both members of staff disappeared for some time. I am used to people walking out of places when I walk in but not those who are paid to talk to me. Eventually, Stacey appeared and took payment from another customer for his meal. She then came over to me, apologised for keeping me waiting and took my order. She checked with the kitchen as she thought that there was no pulled pork, which transpired to be the case, so I substituted the Ruby Jean’s burger (£9.95). I did this as the eating section of the premises is called Ruby Jean’s Diner so I thought I would sample her speciality. My usual house red, of unspecified origin or grape variety (£4.85 for 250ml) was chosen to wash the food down. I paid and took my seat.

As I dine alone, my habit is to take my iPad and do the Telegraph crossword to while away the time. Speaking of the time I looked at the digits on the top of the screen which read 13.26, I then looked at my food receipt which showed that the order was placed at 12.52. I was just about to place a missing burger report with the local police station when Stacey arrived with the food. I had one of the onion rings which were held in place on top of the bun by a wooden stake and had a fried pickle from a separate basket. Both were hot and obviously freshly made. The same applied to the fries which were next to be sampled. I noticed that a piece of bacon was hanging out of the burger and off the plate so I tried to prevent its escape. When I touched it I found it to be stone cold, not just tepid but cold. Stacey was passing en route from another table and I told her about this.  She said that she would get me some more and was off like a shot. I thought that I had better check the other components and found them all to be hardly warm. When the hot bacon arrived I brought up the fault with the rest, another apology ensued and the whole plate disappeared. A full replacement was delivered within five minutes and a refund of the price of the burger arrived with it. This time all was fine but I was so hungry that I had been nibbling away at the large portion of pickles and my appetite had been somewhat dulled so most of the meal was left. 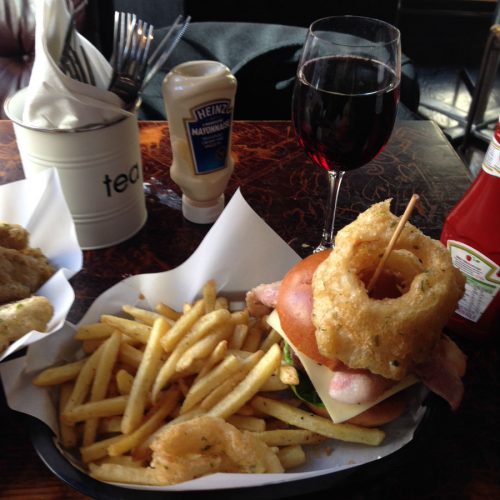 As far as the meal went the pickles were far too strong and only consisted of gherkins.  Sweet and sour pickled cucumbers may have been better, as would have been a variety. The description of the burger on the menu was ‘smoked bacon, emmental, mushrooms and onion rings’. The patty had a charcoal fired taste to it which was good but it was too well done for my liking. On the first attempt the emmental was cold and unmelted but on the second it was warm and drizzling down the side. The bacon was a good thick rasher and the mushroom – singular – topped the filling off. The top of the bun was held in place by the wooden stake and the onion rings, as already pointed out, were balanced on top.

As burgers go the second one was average, and the first should not have been allowed to leave the kitchen. A look at the bacon and cheese should have been enough to indicate that all was not as it should be. The 34 minute wait for a staple of the menu is also unacceptable at lunchtime. On the upside, the music was good and I had plenty of time to do the crossword, although if anyone knows what  the answer to 17 down is……