Sometimes I find food to be really complicated and I’m at the time of life when I don’t want to be bamboozled.

It’s enough of a challenge nowadays remembering whether I should call a member of the distaff gender a woman, lady or girl without causing offence, let alone worry about what I should call a small plate of food. Don’t say tapas because that only applies to certain places in Spain – in others they are pincho but in the Basque region they are pintxos, so you are walking on eggshells there. Italy is no better, where they can be aperitivo, cicchetti or stuzzichini.. 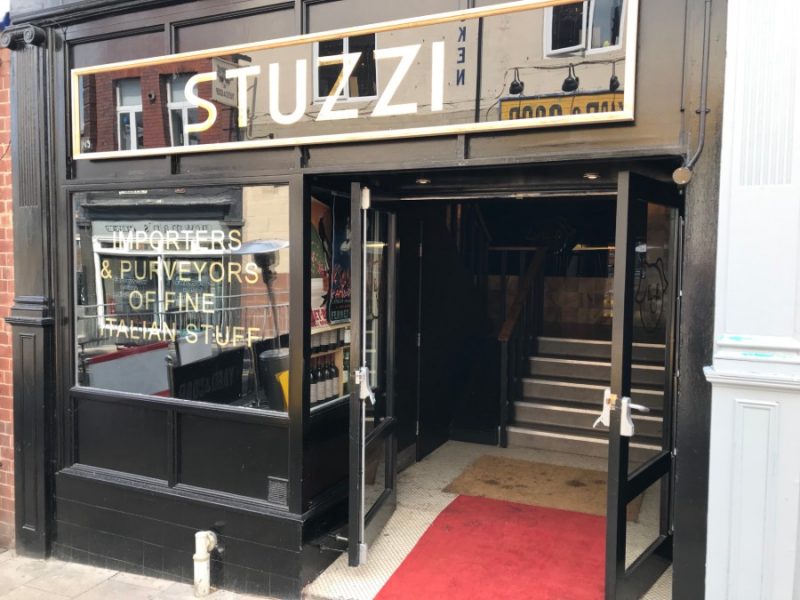 To be fair, I have spent many a happy hour, literally, in Venice, topping up with free cicchetti when ordering a drink, but the more elaborate ones have to be paid for as do the ones at Stuzzi , a contraction of stuzzichini, the Harrogate favourite which has now opened a branch in Leeds.  It is situated at the bottom of Merrion Street but there is also an entrance in the Grand Arcade. 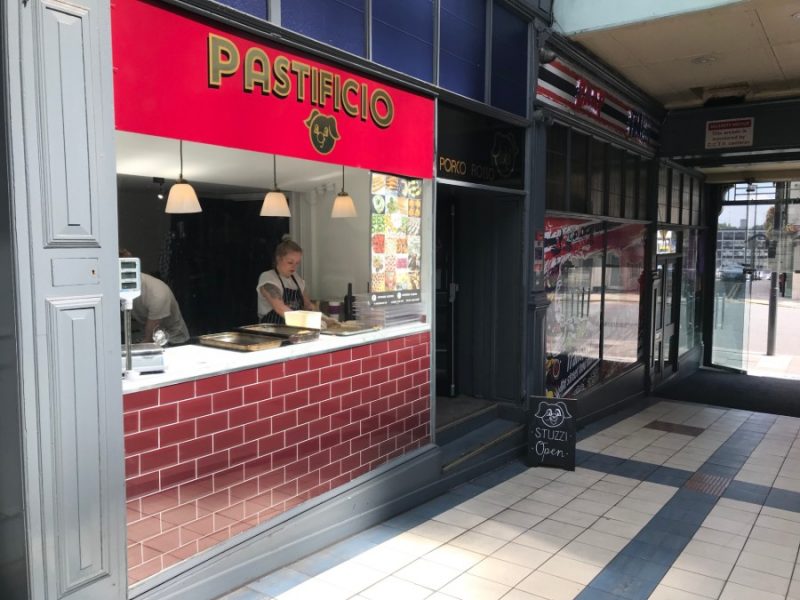 I suppose it’s the Italian influence, in that if you are wining and dining someone you shouldn’t be, you can slip out of the opposite door should their spouse arrive unexpectedly. Knowing the Italians, the spouse would probably be with someone they shouldn’t be as well.  OK that is la dolce vita taken care of.  What most of the names of these small plates have in common is that they are based on the word for toothpick, as that’s how they were traditionally skewered.

If I know where I am going to do a review I usually try to look at the menu on line to gain a feel for the prices and also to save time and dithering when faced with too much of a choice.  Stuzzi doesn’t have a website but keeps customers up to date via facebook and twitter, hence no menu. There is a good reason for this, which is that the food on offer changes constantly, so today’s selection might not be available tomorrow. I did glean, however, that there is a summer lunch deal of the day’s pasta and a glass of wine for £10 so I called to give it a whirl. As you will have gathered, even the pasta changes on a daily basis, so I was none the wiser but guessed that the choice would be so limited that I would not have too much of an attack of the dithers.

On arrival, I was greeted by two charming young women/ladies/girls (I have probably still got it wrong), one of whom said that I could choose my table.  No sooner had I sat down when she arrived with a wine bottle filled with water which was very welcome, the temperature being in the high twenties outside.  I was asked if I had eaten there before and when I replied in the negative I was given an explanation as to how to order and the size of each dish, which was very helpful.  I told her that I was there for the lunch special and she directed my attention to the two pasta dishes at the bottom of the main menu which comprised one vegetarian offering of Orecchiette tossed with ‘Pipi e Patati’ – Roasted red and yellow peppers, chilli, fresh basil and potatoes finished with Planeta olive oil, or the carnivore’s option of Homemade parsley tagliatelle, tossed with a slow braised ox cheek and red wine ragu. I went for the meat.  Just to illustrate what a great deal this lunch special is, the pasta were £8.50 and £9.50 respectively, so you were getting a 125ml glass for either £1.50 or 50p.  My ten bob red was Nero D’Avola and very nice too. Nowhere near as nice as the pasta though.  Fortunately, I was also provided with a knife, fork and spoon so didn’t have to twirl the tagliatelle round a toothpick. 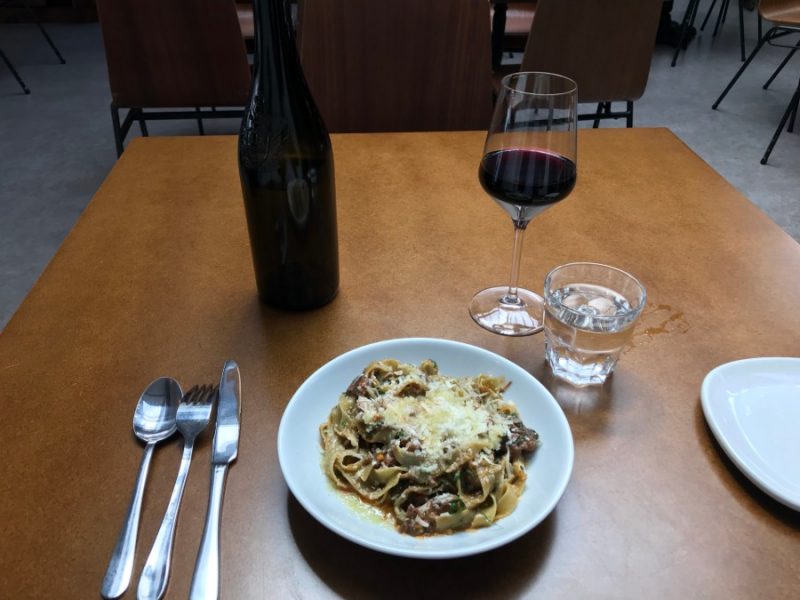 I can honestly say that I have never had such a great plate of tagliatelle, the homemade strands beautifully flavoured with parsley and the ox cheek was in large pieces and so tender that I could separate it using just my fork.  I would love to know what it was marinated and cooked in as it was beyond delicious.  The dish took about ten minutes to arrive, suggesting that the pasta had been cooked to order, which is what it deserved, and it had then been amalgamated with the ragu, as is the correct way to serve all dishes of this type. You do not pile the sauce on the pasta like a topping, unless it is spag bol of course, in which case you can do what you like as it is a pretend dish. 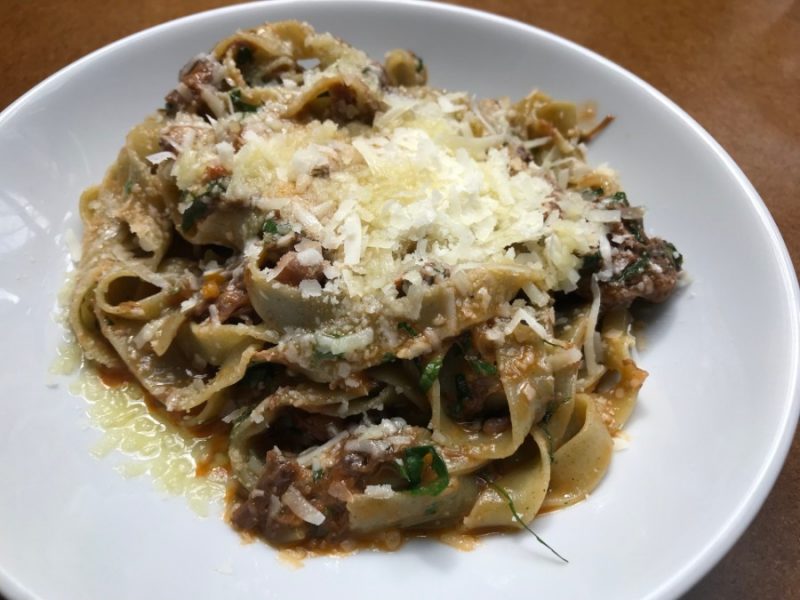 Whilst eating I perused the rest of the menu with which I had been presented and found the dishes to be very innovative, seemingly influenced by the various regions of Italy rather than slavish copies.  It is at times like this that I wish I had a dining companion as it would have been great to order three or four dishes to share and have a cross section of the food on offer. I am sure that my antisocial persona is not really of any interest to you so I will move on to dessert. 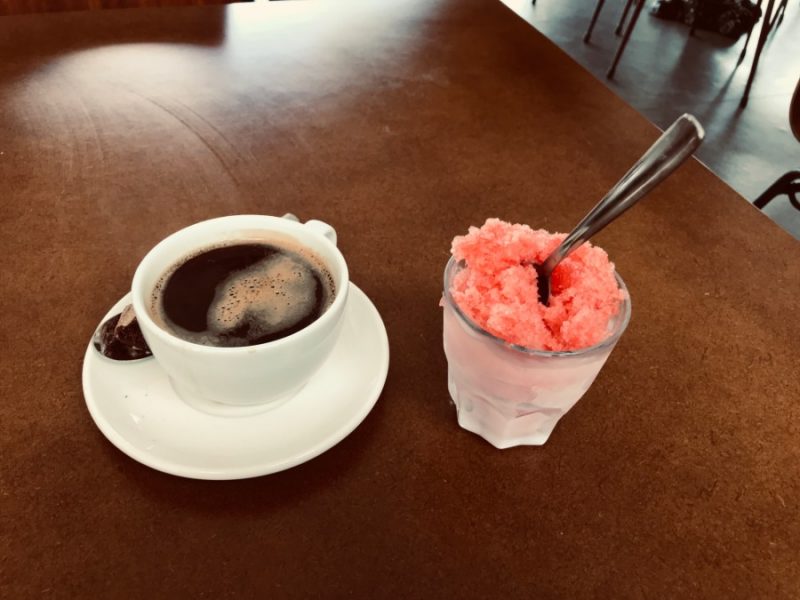 There was a choice of five ‘proper’ desserts, as well as a homemade watermelon granita, three gelati sourced from Bocca Di Lupo in Soho, and cheese. As already mentioned it was boiling outside, and, as I was sitting under the glass roof, inside as well. I ordered the granita (£3.50) as I wanted something cold and homemade, a black americano (£2.25), and asked if I could move to a shadier table – shadier in the light sense of course, not the one near the door for the quick exit.  The granita cooled me down just by looking at it as the glass had been kept in the freezer and so was frosted and cold to the touch.  I didn’t have much hope for the flavour of watermelon ice but it was superb, fruity and intense. I was asking myself how many watermelons had to be reduced to get this tang. The coffee was Italian, so also intense and strong, just as I like it.

Since I moved to Harrogate a few years ago people have been telling me that I should go to Stuzzi and I find it ironic that I had to wait for them to open in Leeds before I did so. I’m just sorry that I ignored the advice as I now know what I’ve been missing. 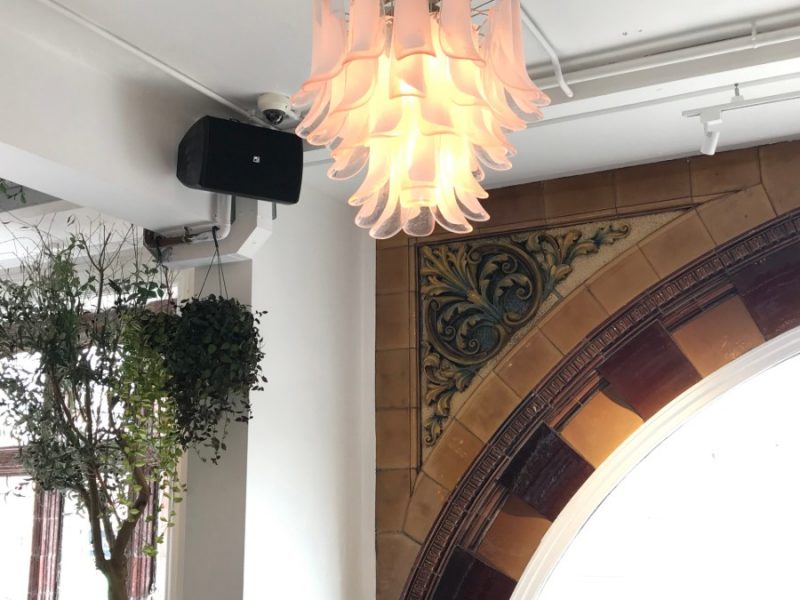 The service was superb, as is the room, which has retained the beautifully tiled arch window overlooking Vicar Lane. Like those who had my wellbeing at heart I would urge you to pay Stuzzi a visit.  I doubt you will get better food and wine for a tenner this side of Sicily.

Please be aware that you will have to wait until Wednesday for your treat as Stuzzi is not open on Monday or Tuesday.