Let’s Do Lunch at The Espresso Bar, Harvey Nichols

Stan Graham has a spot of lunch at the Victoria Quarter eatery and gives us his verdict on the Espresso bar from the well-known Harvey Nichols.

I went to a wedding last Saturday where I met up with some old colleagues from the auction house where I worked up until last September. None of them has seen me since then and in the interim I have grown a beard. For some reason, probably age, it has turned out to be white. One of the chaps who works in the sale room at the auction house and a really nice chap, if not the sharpest chisel in the toolbox, came up to me and said that he really liked the beard. He said that I reminded him of someone but he couldn’t just put his finger on who it was but it would come to him. A couple of hours and several drinks later, he came running up to me and said ‘Stan, I have just realised who you remind me of… Sean Connery.’ Being compared with an 84 year old would normally elicit a few choice words, but Sean Connery, well…… Now this has absolutely nothing whatsoever to do with this week’s review but I just had to tell someone. Should there be an Honor Blackman or Ursula Andress double out there then you know where I am.

So to work. The Espresso Bar, Harvey Nichols is situated outside of the main store in the County Arcade, part of the Victoria Quarter. This means that it is a great place for people-watching, and for people to watch you. Although it is undercover there are plenty of patio heaters for the colder weather, so this is all year round al fresco. The menu concentrates on lighter dishes, sandwiches and cakes which makes it perfect for  lunch. I was shown to my table by a very pleasant waitress, given a menu and left to peruse it. The first thing which struck me was the professionalism of the staff: at no time did I feel rushed but whenever I looked up there was always one who was ready to make eye contact and come over to see what I wanted. There is nothing worse than sitting at your table and trying to attract the attention of waiting staff who look everywhere except where you are. It is bad enough when you have finished and just want your bill, but if you need some condiments or cutlery and your meal is getting cold it is extremely annoying. 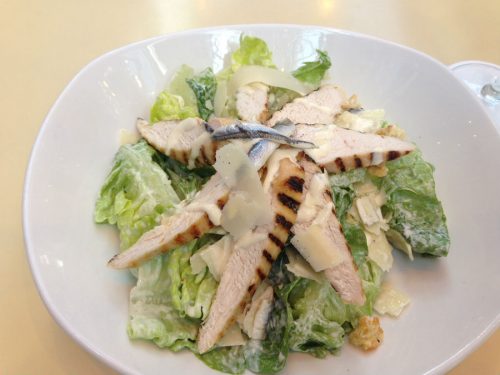 I decided on the Ceasar Salad at £8.50 and added the optional chicken breast for £2.00. The alternative was smoked salmon at £2.50 extra. I accompanied this with a glass of Harvey Nichols Rouge, Corbieres at £4.95 for 175ml. Caesar Salad is a fairly simple dish: lettuce, Parmesan cheese, croutons, anchovies and a creamy dressing. The problem with simple dishes is that there are no fancy sauces to cover up any inferior ingredients so everything has to be fresh and tasty. Traditionally the lettuce is cos but here they used baby gem which has a more intense flavour and also looks better, being greener than cos whose leaves border on white. The Parmesan was fresh and shaved into thicker than normal pieces; absolutely delicious. The croutons were small and hard which suggested that they came out of a packet but were all right. The real let down was the dressing which had very little taste. This could not be said about the anchovies. Like the lettuce, they were a little different from normal. Usually you get a couple of small brown strips which only serve to give the salad a salty taste. Here they were identifiable as being small, silver fish and had been slightly pickled and turned into flavour bombs. The pickle or soused flavour contrasted perfectly with the creaminess of the sauce and cheese. They also had a fishy aftertaste which is a novelty for Caesar salad anchovies. I was  pleasantly surprised by the size of the portion, which was generous, especially when it came to the more expensive components like the Parmesan. A common trick is to load the dish with lettuce leaves so that there looks to be a lot; no such sleight of hand here; the proportions were perfect. The chicken was also plentiful, moist and tender. 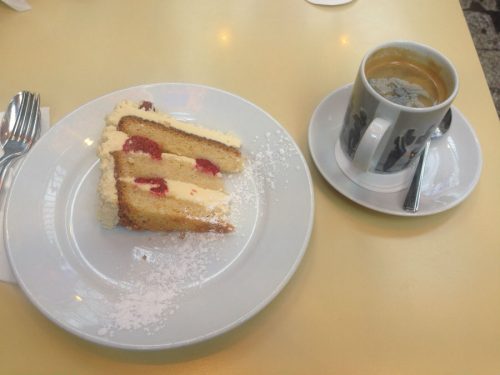 I would not have been doing my job had I not had dessert so I asked for the menu again and, as I seemed to be torn between the options, the waitress said that her favourite was white chocolate and raspberry layer cake (£4.50). I took her advice and also asked for a black Americano coffee at £3.00 for the large size. The regular is £2.80 so it was a no-brainer. The cake was just a little on the dry side, but not by much. The chocolate was wonderful and the raspberries fresh and moist, a great way to burst through your daily calorie intake limit. One thing worth noting is that there is a 10% service charge automatically added to the bill but it is optional and can be removed. I normally do not approve of this practice but it is made very clear on the menu and the bill that this is the case and the service is so good they deserve even more. 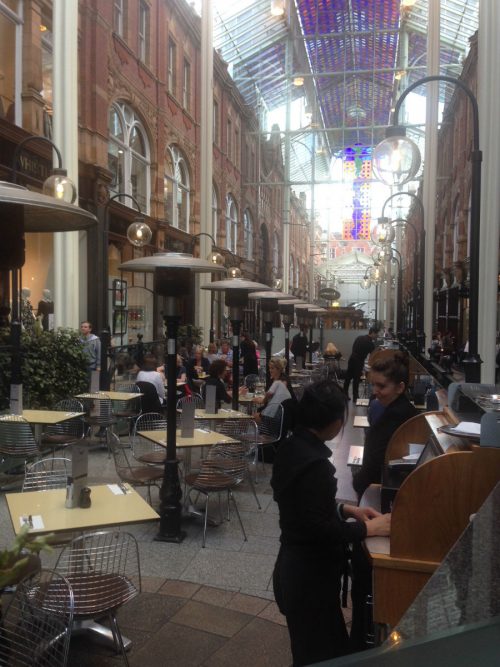 Looking back I cannot think of a better place to have played out my James Bond fantasy except that it has just occurred to me that my ex-colleague probably thinks that Sean Connery is the actor who plays Uncle Albert in ‘Only Fools and Horses’. Still, just for a day or two I was 007. Pay the bill, Miss Moneypenny.