Let’s Do Lunch at the Noodle House in Merrion Street

I have never had an inclination to visit the Far East, although in a previous life I did go to Hull quite regularly, so I’m not in a position to compare the food on offer in Leeds with ’the real thing’.

I would venture to suggest, however, that the dishes on offer at Noodle House in Merrion Street are about as authentic as it gets.  My reason for saying this is that when I called I was the only person of occidental origin in a room which was full except for one small table. Obviously an omen. 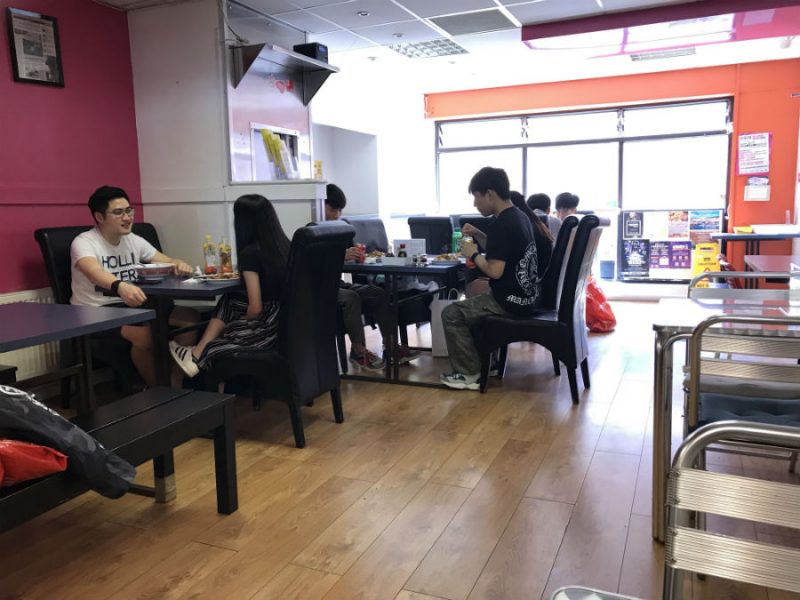 Chinese food is probably the first exotic food that anyone of my age tried, what with the post-war proliferation of Chinese Restaurants, followed some years later by take-aways.  Although Noodle House is nothing like the 1950s version of oriental exotica, the memories came flooding back.  Yes, there is yet another reminiscence coming, so please feel free to skip the next couple of paragraphs should you so choose.

I started at Leeds Central High School in 1961 and became pally with a boy.  The School was a single sex establishment placed frustratingly next door to a girls’ school, Thoresby, and for some inexplicable reason we would go for a Chinese meal on the last day of each summer term.  Our restaurant of choice was The Golden Ring, just across Merrion Street from Noodle House on the balcony crossing the top entrance of the Grand Arcade.  They offered, as did others of their ilk, a Businessman’s Lunch, with three courses for four shillings (20p).  There were very few choices and we always seemed to have Chicken and Sweetcorn Soup, Chicken Chop Suey and Banana Fritter for dessert, which came with translucent yellow custard.  The height of sophistication.

Five years later, I was at Park Lane College, which in those days was half a dozen Portakabins in the playground of a Victorian infants’ school, rather than the monolith it is today.  One of the other students was a Chinese lad whose father owned, you guessed it – Golden Ring – so off I went with him for a sentimental journey.  Instead of climbing the stairs to the restaurant, we descended into the cellar where there was a Chinese youth club with people playing table tennis and reading Chinese comics and newspapers.  I was stunned.  As an aside, the now long-gone ABC Cinema on Vicar Lane, or Ritz as it was previously known, would show Chinese films in the early hours of the morning when all of the restaurants had shut.  As they were purely film shows with no catering, the patrons took bowls of their own ice cream to accompany the flick; a strange sight at 2.00am!

Okay, you can come back now!

There is a reason for these reflections in that Noodle House is much more like the Youth Club at the Golden Ring rather than the restaurant.  As I mentioned, it seems to cater mainly for the Asian community with no comprehensive explanation as to the dishes on the menu.  The very charming lady who, sensing that this was my first visit, took me through the basics of ordering, i.e. go to the counter, place your order, sit down and you will be called when your food is ready.  Unfortunately, she did this quite speedily and, combined with a broad accent, it meant that at the end of the tutorial I was no wiser than at the beginning.  I got the bit about the menu being split into noodle and rice dishes and the noodles subdivided into soup and stir fried, but that was on the menu so I returned her smile and looked as though I knew what I was doing. 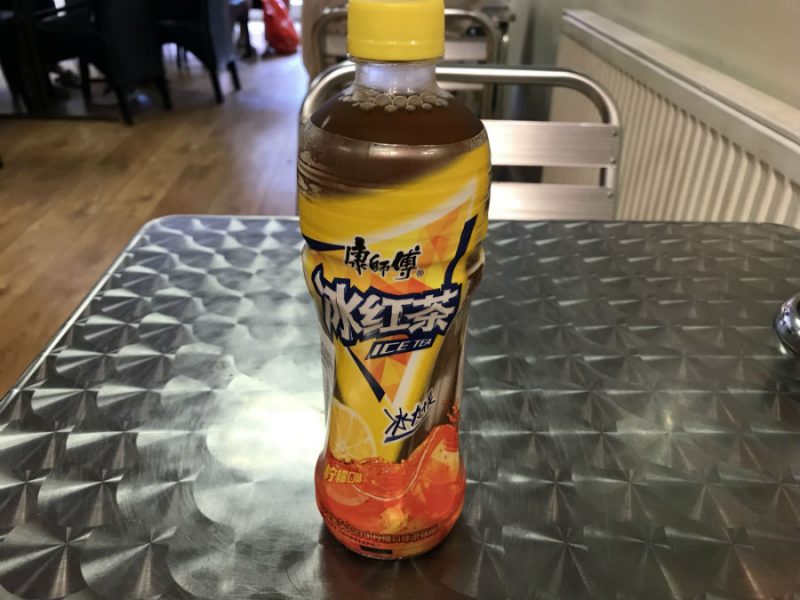 As it is called Noodle House, my choice in that department was made for me, and as it was mid twenty degrees outside I thought that soup was not appropriate, so I went to the stir fried section.  My years of experience of ordering takeaways drew me to No.42 Special Noodle Ho Fun.  Special usually means that they put the full range of meats etc into the dish and I have never been known to refuse fun of any description, so this seemed to be just the thing.  There was a choice of five sauces:  Satay, Curry, Maggie, Thai and the one I went for, Spicy Hot.  To drink, I had a bottle of Lemon Ice Tea which was predominantly labelled in Chinese but fortunately had a small translation on it.  The total for this was £8.60, so if I had got everything disastrously wrong it wouldn’t break the bank.

Whilst I was placing my order I got my first bout of food envy as a couple of plates of the most amazing looking pieces of meat were being put on the counter awaiting collection by the fortunate recipients. These were followed by a chicken dish which I wished I had ordered.  Never mind, I must concentrate on the positives – mine was just as likely to turn my fellow diners’ eyes green when it arrived.  When it was ready, the chap behind the counter shouted ‘Mixed Chow Mein’, so I ignored him but he then addressed me directly to let me know that it was mine. There goes my lunchtime of adventure then, chow blooming’ mein.  I could not have been more mistaken as the dish contained food which was as far removed from the take-away version as it could possibly be, especially in the quality department. 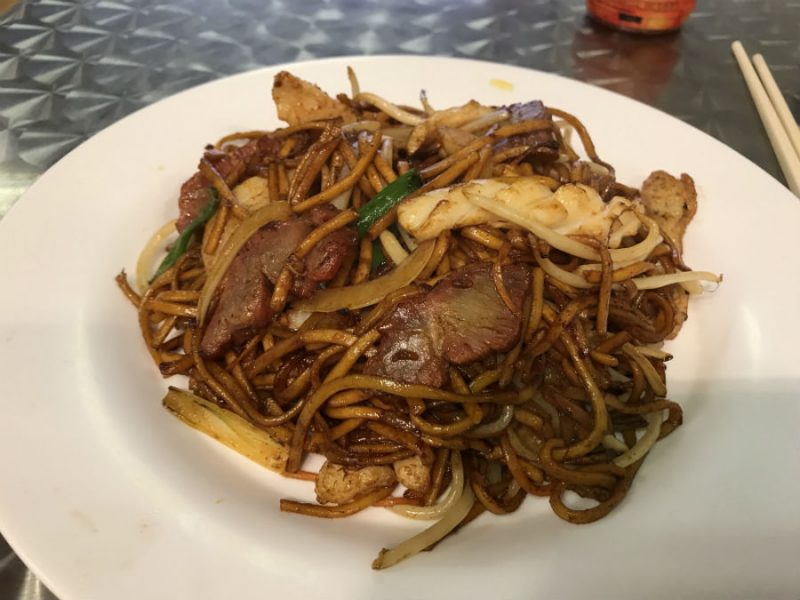 As expected the noodles, which still had a bit of bite, were accompanied by a selection of goodies, including chicken, pork, beef, prawns and what at first I took to be octopus but in fact turned out to be tripe.  It is years since I have had tripe, which I loved as a kid but again this was nothing like I have ever tasted before.  Superb.  Sadly, the photographs do not do the dish justice as, unlike the meat I saw earlier, it is not very spectacular, but the taste more than made up for the looks.  The meat and noodles were done to perfection and the portion more than ample.  The spicy sauce was hot without being overpowering, but the addition of a couple of spoonfuls of the home made chilli sauce from a container on the table provided some further heft.  I am not a heat addict but like to try everything on offer, so I just put it on a small section of the dish.

I had meant to call here a few weeks ago but I found out the hard way that they close on Wednesdays, so should you fancy a visit then please avoid that day.  I will also give you a tip in that the chap behind the counter spoke pretty much perfect English, so I would suggest that you have a word with him as to what to have.  A bigger tip would be to look as if you are perusing the contents of the drinks chiller cabinet which is next to the counter and if you see something spectacular come out for another diner, point to it and tell him that is what you want. 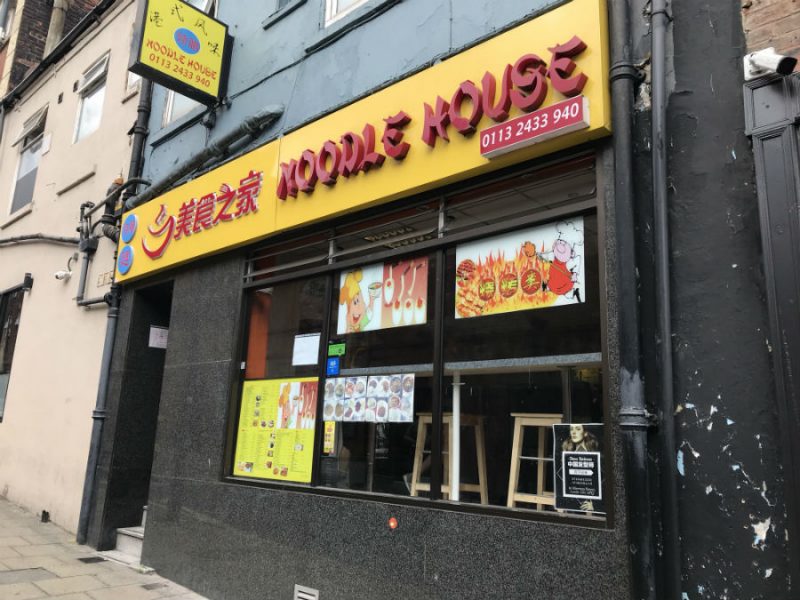 I still have no real desire to visit the Far East and even less so now that I know that there is a part of it very conveniently situated in Merrion Street.