Let’s Do Lunch at The Wardrobe

Stan applauds the food – when it arrives – and uses his skill with word association to reminisce on an altogether different wardrobe malfunction.

I would like you to take a trip with me back in time to Houston, Texas on Sunday 1st February 2004. I am sure that you will all remember it as being Super Bowl XXXVIII between the Carolina Panthers and the New England Patriots. OK, you may not be an American Football fan but I am certain that you will recall the half-time show during which Justin Timberlake ripped Janet Jackson’s top, thus exposing her right breast. Being the USA there was a deafening outcry from the section of the population who believe that women shouldn’t have breasts, but if they must have them they should be kept well out of sight at all times and that this incident only went to prove that the whole world was going to hell in a handcart.

The PR people went into a flat spin and said it was a complete accident, although I can’t work out why Ms Jackson would be wearing a nipple shield under her bra if she had resolved to keep it on. The point of this stroll down Memory Lane is not to add a hint of salaciousness to my article as a cheap marketing attempt, it is to remind you of the origin of the term ‘wardrobe malfunction’. If Messrs Timberlake and Jackson think that they suffered a wardrobe malfunction in Houston then they should have been with me in Leeds this lunchtime. I witnessed several malfunctions by the Wardrobe. Don’t worry, you can carry on reading as the only exposed breasts you encounter belong to a chicken.

I am no stranger to two-hour lunches, especially on Fridays, but they were invariably planned. Today’s just happened. The Wardrobe is a bar/diner/ music venue and is a very large space broken up by the arrangement of the furniture and being split level. I took a seat at a window table so that I could watch the world go by and have an uninterrupted view of the room. There were very few other diners and I was soon approached by a very pleasant waitress who asked me if I would like a drink whilst I was perusing the menu. I ordered a large Montepulciano at £5.80. This arrived within a couple of minutes by which time I had decided to try one of the specials on a supplementary menu attached to the main one with a paperclip. It read ‘American Mac’n’Blue. Mac n Blue Cheese, Southern Fried Chicken, Candied Bacon topped with Spring Onion.’ £11.00.

As there seemed to be quite a lot of potentially bulky ingredients and I was there for lunch, not a recording of ‘Man v Food’ I pointed to the item and asked the waitress how big the portion was. She made a shape with her hands indicating it was about as big as a small soup bowl so I said that I would have it. It was over twenty minutes later when a bowl of mac n cheese arrived. I informed the waitress that the dish was missing quite a few components and she said that she thought that that was what I ordered. I pointed again to the supplementary menu, then she apologised and took the dish away. Another twenty minutes or so later something approaching what I had ordered appeared. 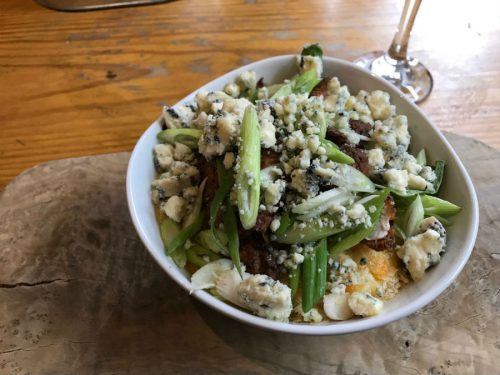 The only difference between the original offering and this one was the three small chicken goujons, some crumbled blue cheese and chopped spring onions resting on top. Why they could not have been added straight away is beyond me. The waitress did say that it was a new chef and someone was having to tell him what to put on it. Perhaps a copy of the menu in the kitchen may have done the trick. Whoever was telling the rookie what to put on top could do with a refresher course as well because I realised after a couple of forks full that there was no bacon in the topping. Had I noticed straight away I would not have sent it back again as by this time I was starving and also having trouble resisting the wine so I could photograph the full glass with the meal.  I did inform the waitress, who apologised and said that they would not charge me for the wine and give me a discount, which turned out to be 15%, on the main course.

By the time I had eaten the main course I had been on the premises for over an hour and apparently become invisible to the waiting staff. I took my time finishing the wine and eventually beckoned someone over to the table. Still the place was virtually empty, most of my erstwhile fellow diners having finished and left. I ordered a black Americano at £2.00 and the vanilla cheesecake £4.95. The coffee arrived fairly quickly as it was the waitress who made it behind the bar, but it was the normal twenty minutes or so before the dessert joined us at the table. I was wondering how plating a piece of cheesecake could take so long but when I tasted it I found it to be slightly warm which indicated to me that it had possibly been defrosted in a microwave. 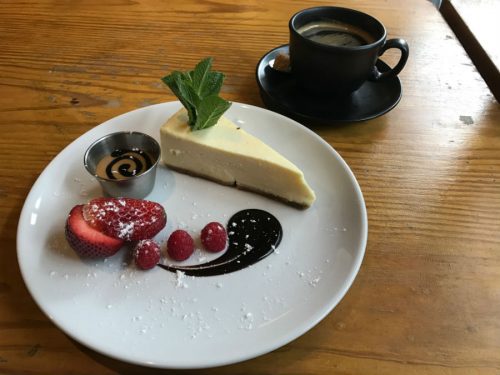 The most annoying thing about all of the above was that the food was really very good. Mac’n’cheese can get a bit boring after a couple of forks full but the imaginative choice of toppings turned it into something special. The tang of the blue cheese and the sharpness of the spring onion contrasted so well with the unctuous, thick cheese sauce and pasta. I imagine that the saltiness of the bacon would have added an extra dimension but I will never know. The dessert was beautifully presented with fresh strawberries, raspberries, chocolate sauce and a pot of runny caramel. We all know Sod’s Law, which states that if something goes wrong everything will go wrong, but I shudder to think what would have happened had the place been even moderately busy.

To thank you for staying with me through this review I will save you having to use Google. The New England Patriots beat the Carolina Panthers 32-29.