Stan Graham heads to the spectacular Tiled Hall Cafe in Leeds Gallery for a spot of lunch, and gives us the low-down on their variety of offerings.

I can think of no more spectacular room in which to have lunch. Tiled Hall Cafe is situated in the heart of Leeds, or should that be the art of Leeds. It is a room which links the City Art Gallery with the City Library. In spite of its being part of the library there is no need to book! This used to be the reading room, cluttered with shelves and desks, until it was cleared and refurbished in 2007. The tiled ceiling and walls are works of art in their own right, with the parquet floor completing the effect. 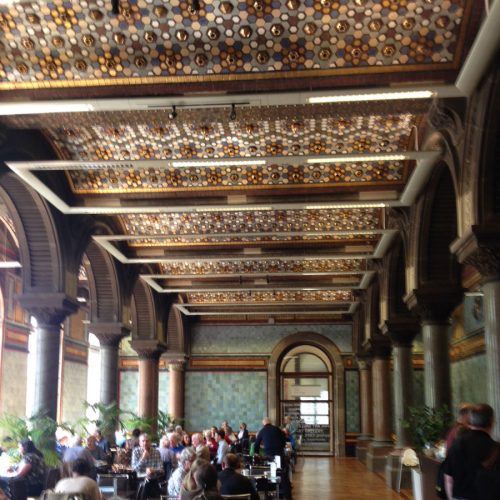 My first taste of municipal dining was in the 1960s when I attended Leeds Central High School, now a council office, which is on Cookridge Street. A couple of us would escape school dinners and eat at the cafeteria in the Town Hall. Access was from the Calverley Street entrance and was featured in a TV programme in the 1970s by Alan Bennett. If the Town Hall cafeteria was a rung higher than school dinners, Tiled Hall Cafe is a further huge leap up the culinary ladder. The menu is fairly light with a selection of wraps, bagels and salads. There are also daily special soups. I have been here during the winter when there has been corned beef hash on the blackboard. It would be good to see it there again.

As it was a warm day I settled on one of the three salads on offer, each of which is available with a chicken or feta option. Bulgar wheat with chicken it was, a snip at £4.95. Cheaper than a sarnie at lots of places. A black Americano completed the meal although wine is available. At this point I would point out that you choose what you want from the display cabinet or blackboard and order it when you get to the front of the queue. You are given your drink and a small tub with cutlery, napkin and a numbered paddle. You take your seat and the food is brought to you. Even though the food is made to order the service is pretty quick so your tea or coffee does not have time to get cold. My main tip for surviving this process is ‘be patient and don’t panic’. Be patient because, although the staff are friendly and largely efficient, the customers include people who have been visiting the art gallery. These are folk who spend ages studying a portrait or landscape, admiring each brushstroke, and use the same method to peruse the menu – bless their hearts. Don’t panic because, when you have seen the item you want and there is only one left in the display cabinet it doesn’t mean that someone at the front of the queue is likely to nab it. The samples are just there to show the range and your order is prepared fresh. 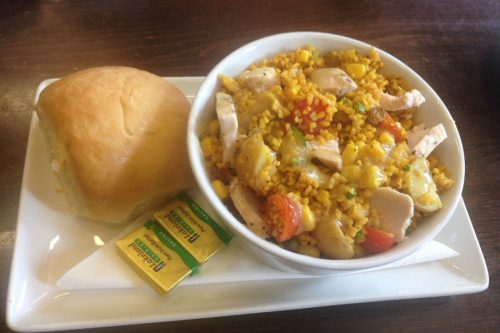 In my opinion, bulgar wheat is in the same category as couscous, pasta, gnocchi and quinoa: in itself it is pretty bland; it is what you do to it that counts. Here they had mixed it with herbs, plump raisins, tiny new potatoes, sweet corn and small cherry tomatoes. Just a couple of warnings: there were also flaked almonds added so if you have a nut allergy you had better double check with them; and it contained red chillies which gave it a real hit. The overall effect was sensational; I loved every mouthful. As the chicken was an optional extra I thought that the chunks which I could see on the top would be the total amount but not a bit of it. There were other moist pieces of white breast all the way through the dish. My only criticism is of the bread roll which came with it. It was perfectly fresh and beautifully soft but I would have preferred something a bit browner, crustier and more artisan in order to continue the healthy eating theme. Butter in foil packets is also a bit ‘economy class airline’ school. The coffee was great, too. I take mine black with no sugar so there is nothing to mask the taste of a bad one. 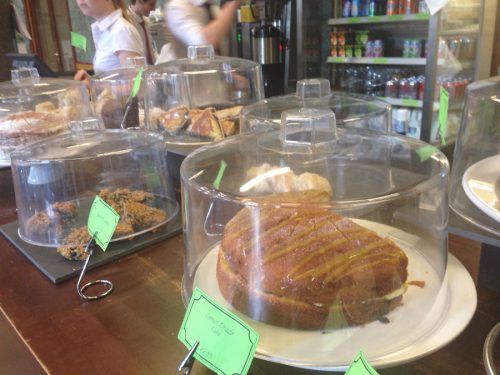 Should you have room for dessert or just want to drop in for coffee and cake, there is a very appetising selection. The one at the front is lemon drizzle and looked lovely and moist. There are also flapjacks and cupcakes if you prefer something lighter.

I am not a fan of star ratings, but I will say that this is a gem of a place and well worth a visit.