Let’s Do Lunch at Simpatico – Fresh, Fine and Friendly

We are so lucky to live in a city where the Victorian architects were so forward thinking as to build these wonderfully ornate structures in order to protect shoppers from the ravages of the Northern climate. I often wonder what they would think of their being used as ‘outdoor’ seating to accommodate diners at the plethora of cafes, delis and restaurants which have sprung up over the past decade. I am sure that their progressive outlook would mean that they would wholeheartedly embrace the change. I know I do, as they add a Continental vibe to the city and make great places to people-watch whilst eating, whether those being scrutinised are wearing summer clothes or snow boots.

Had it not been for the County Arcade I would probably not be writing this article, as that is where my mother and father met, he being the manager of the Mecca Ballroom which used to occupy the premises now trading as the Reiss ladieswear shop, and my mother a regular at the Saturday night hops.

Simpatico sells Pizza Al Taglio which means pizza by the slice, and offers a different slant on the normal version as the dough is made from whole grain, spelt and other cereals. It has a high hydration and is left to prove for 72 hours, which gives it a totally different texture from either the traditional Roman base which is thin and crisp or the Chicago version which is the thickness of a duvet. The result is a very tasty, if odd, combination. The bottom of the base, if you follow my drift, is very crisp, but the top layer is a bit like sourdough with the air bubbles creating a light bread texture. They are cooked in special ovens shipped in from Moretti Forno in Rome. The result is a base which could quite easily be eaten just as it comes and be delicious, which would make my job a lot easier than it has turned out to be because I am now about to tackle the topping. 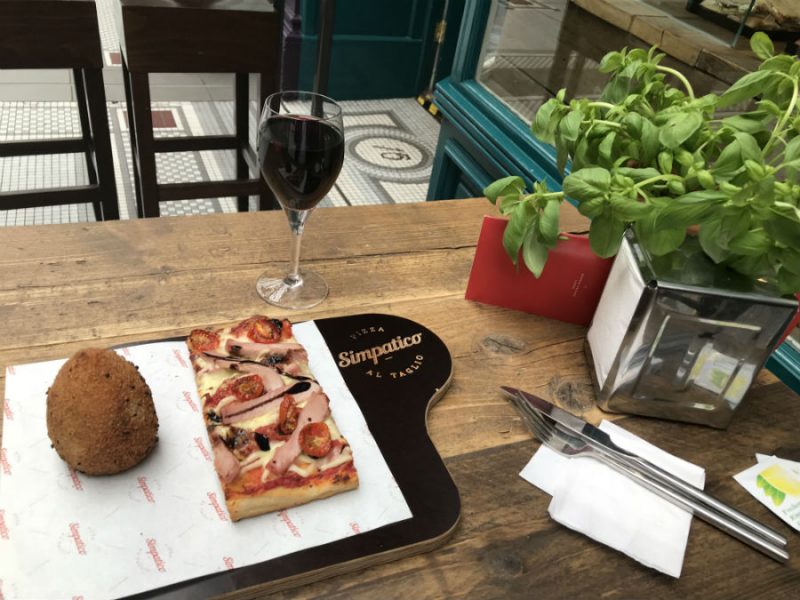 From the range available I opted for the Ham and Balsamic at £3.95, which was wonderful. The homemade tomato sauce and cheese topping were enhanced by thicker than normal strips of fresh ham and cherry tomatoes dressed in a rich balsamic sauce. Nothing very clever, but when you are dealing with such good ingredients I don’t think that you need to mess about with them too much. ‘What is so difficult about that?’ you may ask.  Well, because fresh ingredients are used, the toppings change on a daily or even hourly basis, so if you turn up wanting a slice of what I have just described you could be disappointed. On second thoughts, you will probably not be disappointed as I am sure that whatever is on offer will be just as good.

The advice on an information card in the restaurant is two slices for lunch and three for dinner. I just settled on the one as I had seen suppli in the display unit and decided to give one a try.  Suppli are rice balls coated in breadcrumbs and deep fried. They are a lot like the Sicillian Arancini but normally contain a filling of tomato sauce and cheese rather than ragu and peas. The suppli sold here are larger than I have seen in Rome and pear-shaped, only in appearance not result. The chunk of Mozzarella in the centre was wonderfully stringy and it is this which gives them their Italian nickname of ‘telephones’ as, when they are cut in half, the cheese which joins the two parts together makes it look like an old corded phone. It is only a matter of time before Apple bring out a ‘smart’ version at a grand a pop. The taste was again very good, with the cheese making itself known rather than just being there for effect. A snip at £3.50.  I could not let the opportunity of a glass of red go begging so I had a very pleasant house Merlot at £4.50 for 175ml. 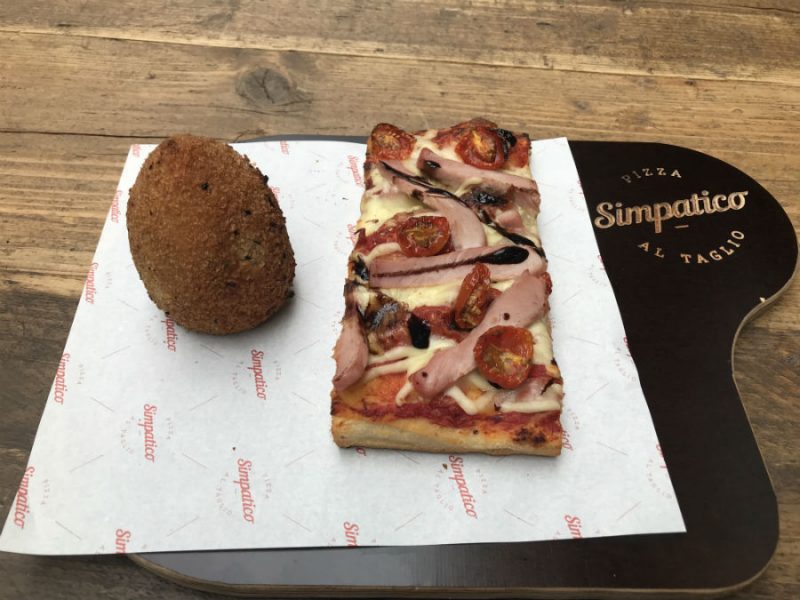 The service was extremely good, with the young lady behind the counter informing me that the suppli would take about 4 minutes and did I want the pizza straight away or to wait and have both dishes served at the same time, which I thought was a nice touch. There were potted basil plants on the tables, which gave a good atmosphere and could also be used to enhance the flavour of your lunch should you so desire.

Simpatico is Italian for ‘nice’ or ‘friendly’ but in this case, it means both. 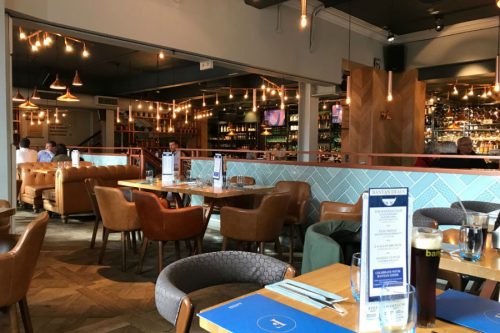 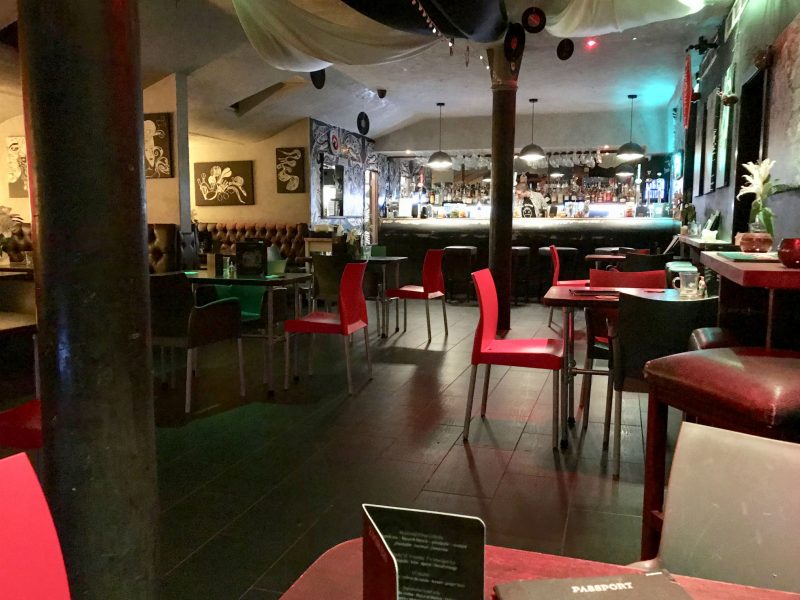 Let’s Do Lunch at Distrikt 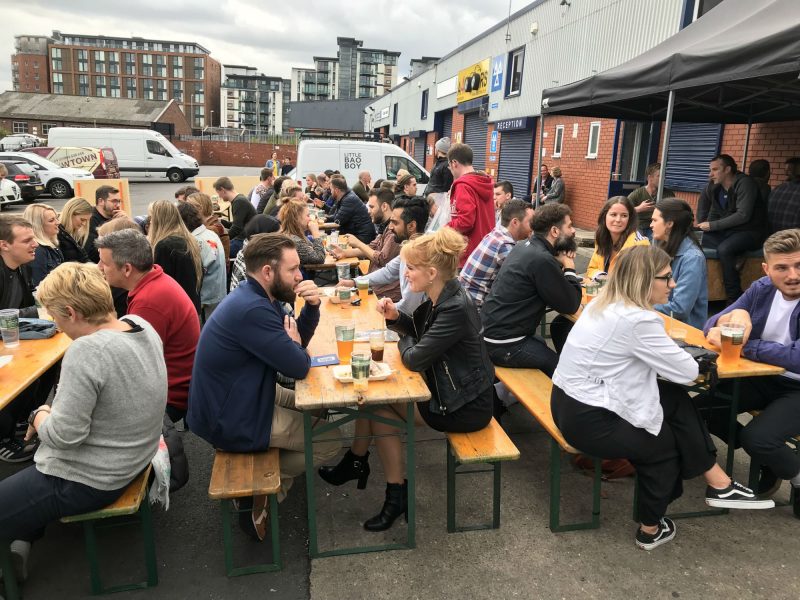