Another Let’s Do Lunch with nostalgia from Stan Graham, who this time takes us back to one of the 1970s best-loved music-makers as he savours the temptations of Banyan.

According to the dictionary I use, the word ‘banyan’ has a couple of meanings. It is a loose flannel garment similar to a vest, or a large Indian fig tree. Try as I might, I could not reconcile the name with the premises I visited. The staff were fully clothed and despite an extensive search I could find no sign of a fig tree anywhere near City Square. There are several other branches of the business around the Leeds area and, whisper this softly, one in Manchester, but again none of them bears figs. I chose Banyan City Square as I had an appointment in Infirmary Street so it was handy. They also have a January special offer running until 9th February of half price food if you book over twenty-four hours in advance. The restaurant is part of what used to be the old Post Office, an iconic building opposite the station.

I arrived at a couple of minutes before noon when the place was still almost empty but within a few minutes the restaurant began to fill up and there was a great buzz going on, not bad for a Tuesday. I was shown to a table and asked if I wanted a drink, so I ordered tap water. A large bottle was produced for which no charge was made. The menu covers all bases, from burgers to the healthiest of salads and bowls.  I began with Crispy Calamari with Lemon and Caper Mayo at £7.95. The calamari lived up to its description by indeed being crispy. The pieces of the mollusc were smaller than normal and very tasty, holding their own against the squeezed lemon and tangy caper mayo dip. For the main course I opted for Chicken and Chorizo Salad with Sautéed New Potatoes, Green Beans, Slow Roast Tomatoes, Mixed Leaves with Balsamic and Grain Mustard Dressing (£10.95). To drink I chose a 250ml glass of Merlot at £6.50. 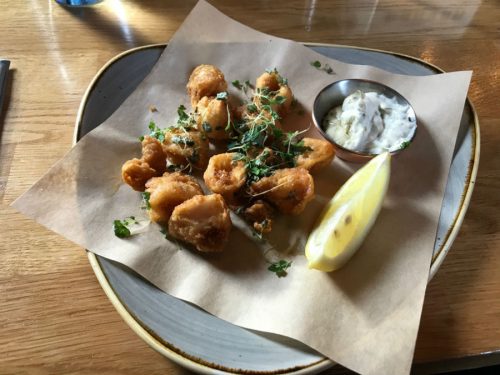 I had gone for the salad as the waistband on my trousers seemed to have shrunk over the festive period and it proved to be an inspired choice. The chicken was delicious, not overly cooked and in four thick pieces atop the other elements. Although an innocent looking salad, there was enough in it to satisfy the most demanding of appetites. Hidden beneath the chicken and leaves were large pieces of sautéed potatoes and roast tomatoes. As both were warm they changed a virtuous dish into something approaching comfort food. The generous amount of chorizo was cut into small pieces which carried an awful lot of flavour, giving the dish a further dimension. The green leaves were the usual suspects of rocket and spinach but a few pieces of Little Gem lettuce came as a surprise. The salad was so filling that I declined the offer of the dessert menu and restricted myself to a black Americano at £2.30. 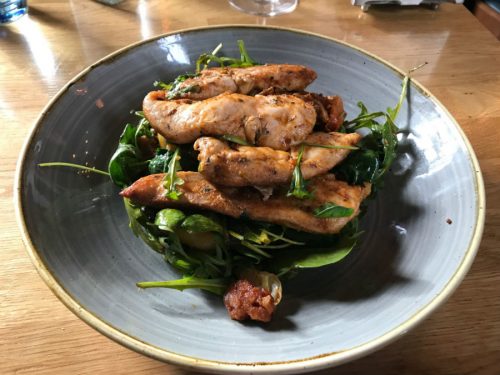 When the bill arrived the 50% discount on the food had automatically been applied, reducing the total bill by a very welcome £9.45, a veritable bargain. I must mention the exemplary service from my waiter, Aleksander. He was there when needed but not overbearing, which is a difficult trick to pull off. 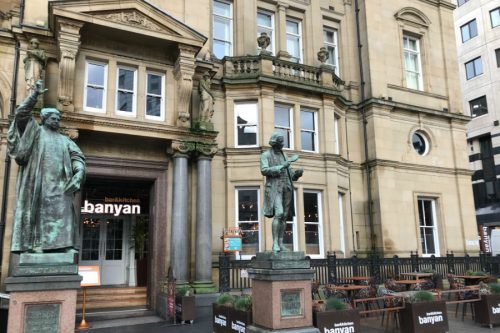 At the entrance of the restaurant are two of City Square’s famous statues, the one on the left being of Dr Hook. This is the Dr Hook who was the Vicar of Leeds from 1837-1859 rather than the 1970s pop group, although When You’re In Love With A Beautiful Woman, or even Sylvia’s Mother, it would be a good place for a date, and if all of the meals are as satisfying as mine you will not find yourself asking for A Little Bit More.