Let’s Do Lunch at Casa Colombiana

Stan Graham visits another spot in The Grand Arcade for a taste of South America, samples one of their specials and has a taste of the wine.

This week I find myself back in the Grand Arcade which seems to be wall to wall food outlets nowadays. I am also in another Latin American eatery, Casa Colombiana. This is not an accident as, when I get rumbled for writing this sort of stuff, I want to get accustomed to the fare of countries which do not have an extradition treaty with the UK.

At first sight this looks like a coffee house but on closer examination it is a restaurant serving its eponymous food. The waitress was a young lady named Fabiola who hails from Colombia and has a wonderful accent, although her lack of conversational English made obtaining any information about the company pretty difficult. I do not review chain restaurants as a rule and I was assured, I think, that this is a one-off independent outlet.

The room is basic with a latin theme but the chairs are comfortable and the tables of a decent size and to me that is all that matters. The atmosphere was enhanced by the Spanish background music, although I am willing to wager that most restaurants in Bogota are pumping out One Direction and Lady Gaga tunes.

I began with the empanada de carne, Colombian style pasties – their description not mine – at £2.00. It was a small half-moon shaped pasty which had been deep fried, was beautifully crisp on the outside and packed with minced lamb a bit like a defused samosa. There was a dip containing vegetables which was very pleasant. I chose my main course from the blackboard specials, of which there were two. Estofado de pollo was described as ‘chicken stew with a latin twist – marinated with peas, potatoes and carrots’ (£9.50). It arrived in a small dish, as did the accompanying salad, both of which had been put on a large plate along with a helping of rice and a fried plantain. This presented me with the classic dilemma, do I pour the stew onto the plate with the rice or do I put some rice into the stew and eat it that way. Had I done the former, the fried plantain would have been engulfed by a stew tsunami, but to do the latter, there would not have been room in the dish to accommodate very much. Luckily the decision was made for me. 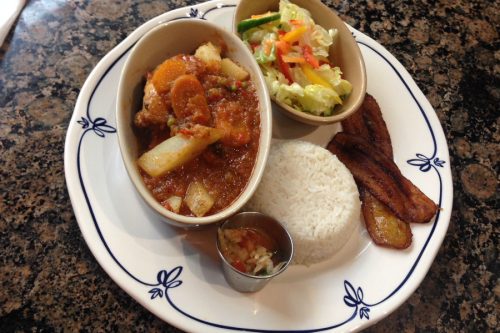 On its arrival I looked at the stew which looked as though it was composed solely of the aforementioned carrots, peas and potatoes and was wondering what happened to the chicken. I need not have been concerned as, when I delved beneath the contribution towards my five-a-day, there were two pieces of chicken on the bone which meant that I had to remove them from the dish in order to separate meat from bone, thus leaving ample room to replace them with rice. Problem solved. I love meat on the bone in stews and curries as it adds so much more flavour than when filleted. The skin was also still in place which enhanced it even more. I was surprised that there were not more spices involved as, on this showing, Colombian food seems to be a cross between Mexican and West Indian, which is logical given its geographical location. The dish proved that you don’t need to add too many spices to make a dish taste great if you use good ingredients and cook it properly. I washed the meal down with a large glass of house red (250ml) which was a Chilean Merlot at £5.50.

I didn’t have room for dessert but finished with a black Americano coffee which was excellent, but so it should be here.

The good news for me, albeit bad news for you, is that I can continue to submit stuff like this until I get the tip off that the boys in blue are on their way, at which time I will board the getaway plane to South America and dine in a very pleasant manner. Second thoughts, I think I will stay here and do my porridge. At least I won’t have to listen to One Direction and Lady Gaga whilst eating it.