Stan once again draws from his international experiences as his visit to Chicago Rib Shack takes him down his intriguing memory lane.

I think that Chicago is my favourite city in the USA although, being a child of the sixties – now one of the over-sixties – I did love San Francisco when I went there. I must admit that I have not seen Chi-town during one of its viciously cold winters so I may be working from a biased point of view. It has all of the attributes of New York, including a taller skyscraper than anything the Big Apple has to offer, but is a tad smaller which gives it a more intimate feeling.

The Chicago and Calumet Rivers split the city into three and give it great character. Food-wise it has always been famous for its wide variety of hot dogs and is home to the Rock Bottom Brewery so when I saw the Chicago Rib Shack in the Trinity Kitchen I thought I would make a vicarious return visit to the Windy City.

The premises, like all of the permanent ones in Trinity Kitchen, comprises a serving counter with a cooking area behind it. You order your food and are given an electric gizmo which you take to your table. When your order is ready to collect, the gadget lights up and you return to the counter to collect your food. This is great if there is more than one of you, the fate of the single diner has not been considered as, whilst I was absent picking up my order, someone had occupied my table. As the philosophy of the complex is that you order from the outlet you like and sit in whichever part you fancy I had no problem in finding another place to enjoy lunch. 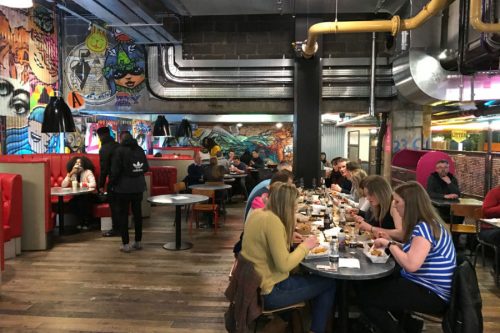 On perusing the menu I realised that this was a place which doesn’t do what it says on the tin as there are six varieties of burger, five house specials but only one type of rib viz Baby Back. I had an appointment in the afternoon and was wearing my best wedding/christening/funeral suit so did not want to risk either spilling crimson coloured sauce down the front or arriving at my rendezvous with a large red painted smile across my face from the BBQ sauce so I gave them a miss. I was also hoping that there would be some kind of food provided at my destination so I chose the Pulled Pork Sandwich from the House Specials section of the menu and had a side order of Coleslaw.

As I was also hoping that I would later be plied with wine and as the Chicago Rib Shack does not serve hot drinks, I chose a Coca-Cola rather than beer to wash it down. The girl behind the counter said that I could get a coffee from the Champagne Bar opposite but having already lost my seat when I left it for a moment, I didn’t want my sarnie nicking as well.

The sandwich was ‘Slow cooked pulled pork with BBQ Sauce (oops! – stain alert), Cheddar Cheese, Spicy Coleslaw and a Frickle, which turns out to be a fried pickle. It was priced at £6.75 and I must say that it was all delicious. The combination of flavours was nigh on perfect with the BBQ Sauce being milder than most. I do like strong flavours but find that this type of dressing can completely overpower whatever else in in the dish. The pork was melt-in-the-mouth texture and just the thing for lunchtime. The side of Coleslaw at £2.50 was a bog standard white cabbage in creamy dressing with only the odd strand of carrot and onion. The Coca-Cola at £2.20 was, well, Coca-Cola, and if you don’t know what that tastes like I would like to welcome you to Planet Earth.

If you are after something quick and delicious at lunchtime then this is your place. They even have a Kid’s Menu but mercifully none of the little darlings was present whilst I was there. Cranky old man!

Should you ever decide to visit the real Chicago then might I suggest you go on Google to check out the City Greeters scheme which they run. Volunteer residents of the town will take you on a tour of the places which may be of interest to you. They ask when you book what you would like to see. I told them that my favourite film in the history of mankind is ‘The Blues Brothers’ but, alas, most of the area where it was filmed has been redeveloped. C’est la vie! Speaking of films, the name of the lady who was my City Greeter was Bonnie. In view of the history of gangsterism in Chicago I was hoping not to be introduced to her significant other, Clyde.