Let’s Do Lunch at Hepworth’s Deli

Before I begin this week’s review I must warn you that I may not have the opportunity to finish it before I get a knock at the door and a member of the local constabulary enters to slap the cuffs on me and drag me down to the local Bridewell to be banged to rights. The reason for this is that I spent my lunchtime shoplifting.

This is not the normal way I would while away a Tuesday but today has turned out not to be a normal Tuesday. In my defence, Your Worships, I didn’t mean to do it, I don’t know what came over me. One minute I was a law abiding, honest citizen, the next I have my curtains closed and I am writing this hiding behind the sofa. When I read of ‘celebrities’ of a certain age blaming their hormones or mid (in my case late) life crises for committing the same crime, I tend to sneer and think that they have enough money, so why did they not just cough up the wedge and be done with it, but when it happens to you, you just beg forgiveness as I am here. Please let me set out the case for the defence.

I have just been to Italy for a few days and was craving some good old British food. I had picked out an establishment specialising in just such fare but took a detour to Tall Boys Beer Market in Thornton’s Arcade to pick up a loaf of Leeds Cooperative Bakery’s sourdough bread, and that was when I noticed Hepworth’s Deli next door. There was a blackboard outside proclaiming that they were doing a Roast Chicken and Quinoa Salad for £5.00. As my Italian trip had played havoc with the old waistline, the angel on one shoulder convinced the devil on the other that I should postpone my British blowout for a little while and go for the healthy option, so the three of us went in.

On entering I took a table in the window next to a couple, the male of whom was knocking back a full English breakfast. The devil on the shoulder whispered in my ear that I should forsake my good intentions and wade into the archetypal British plateful. The angel on the other put forward a more compelling argument by drawing my attention to the strain being put on my shirt buttons. I was approached by a very pleasant waitress who left me with two menus, one for food and the other for drink. I ordered a house red at £5.00 and perused the food options open to me.

I have rarely seen a menu containing as many dishes that I would have loved to order. The range, imagination and prices were amazing. I was so overcome with choice that I decided to stick with the salad that had caused me to come in in the first place and was not on the main menu, so I thought may be a one-time opportunity. As it was only a fiver I asked the waitress whether I should order a starter but she said that the small dishes were a bit big to be starters and the main course would be fine. Not wishing to lose face I asked for a bowl of olives at £2.00.  How filling can they be? On arrival the bowl of olives turned out to be more of a bucket so I began to make inroads. Among them was the odd slice of mushroom and onion, a nice touch. The salad was presented on a wooden board and was absolutely delicious. 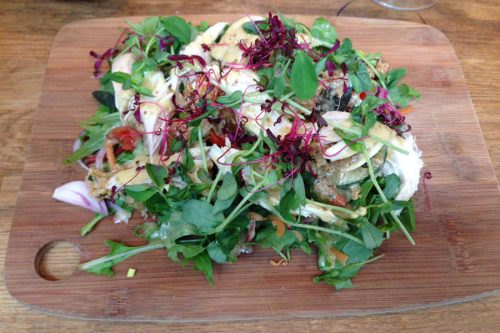 There was a very generous amount of roast chicken which came in lumps torn rather than carved from the bird. The other components were several types of leaves, red onion, spring onion, cubes of butternut squash, small cherry tomatoes and the eponymous quinoa. The dressing was fresh tasting and brought all of the other flavours together. I should have left it there but the devil pointed out a delicious looking blueberry cheesecake in the chiller cabinet and reassured me that I had hardly taken in any calories so far so I had every right to sample it. In fact, he went on to say that I owed it to my readers to give it a try. How could I possibly let you down my friends, especially as I may need you as character witnesses when my case comes to court. I ordered a piece (£2.50) along with a £2.30 black Americano.

The cheesecake was just as delicious as the rest of the meal, with a compressed biscuit base which was so dense that it seemed like pastry. The coffee was large but was not watered down as some of this size can be. I would go so far as to say it was just about perfect. The total bill for a wonderful lunch came to £14.80.

Those of you who have been paying attention, or Paul who pays my expenses, will have worked out that the bill should have come to £16.80. I use the bill to remind me of what I have had as well as the details of the establishment and I have just noticed that the £2.00 for the bowl of olives is missing. This is so ironic as, because there were so many and I didn’t have a prayer of finishing them, the waitress offered to put the leftovers in a bag so that I could take them away. I am planning to visit Leeds again on Saturday for the Waterfront Festival and I hereby swear that I will call back to Hepworth’s and bung them the two quid. I also promise that I will not stray from the straight and narrow again and will check my bill scrupulously in future before leaving the gaff. I now need to try to sleep for the next few nights.

I must go, as I am sure that I can hear a pair of size 13 boots on the drive. Tetley’s – Bringing the brewing back home to Leeds 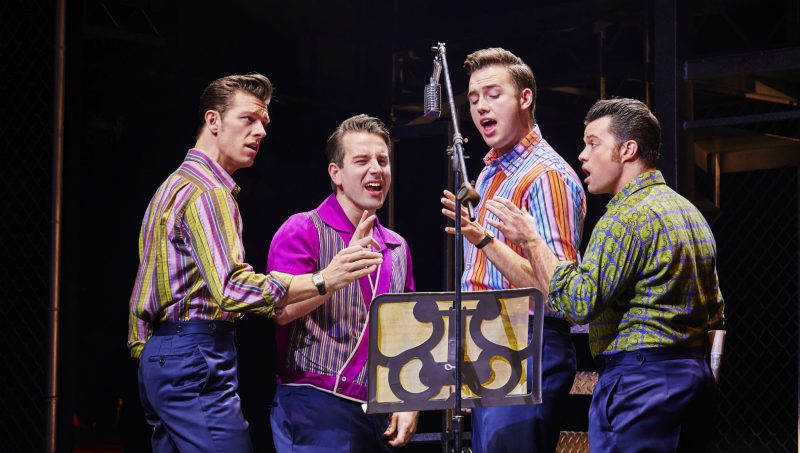