Friday (or should that be fryday) 1st June was National Fish and Chips Day and to mark that fact, Art’s Cafe Bar in The Calls put on a special Classic v Modern menu.

There was the traditional Haddock in Batter on the normal menu and the chef had devised a modern twist on the national dish. Before I review the meal I would like to delve into the reason why fish and chips are the national dish of the UK.

There is a difference of opinion as to when the first fish and chip shop opened.  The Malin family in London claim that theirs was the first in 1860 but so do the Lee family in Manchester whose establishment opened in 1863. Until 2016 Leeds could claim the ‘Oldest Fish and Chip Shop in the World’ which was in Yeadon but has, alas, now closed. It had been trading continuously since 1865 so was a pretty early arrival at the party.

The dish was one of the first take-away meals and was a cheap way to feed a family in urban areas during the industrial revolution. Even when I was a kid I would be sent to the chippy where a fish was eight old pence and chips were thruppence. The total for the two was under 5p in today’s money. The big clincher for popularity was that fish and chips was the only take away food not rationed during the Second World War, so it became a major supplement to the diet of the population. This didn’t mean that they were always available, but when they were, the iconic sign ‘Frying Tonight’ would be displayed in the shop window and queues quickly formed sometimes hours before opening time. With the advent of Chinese, Indian and pizza take-aways the number of chip shops has declined but a portion is still served an average of twelve every second. 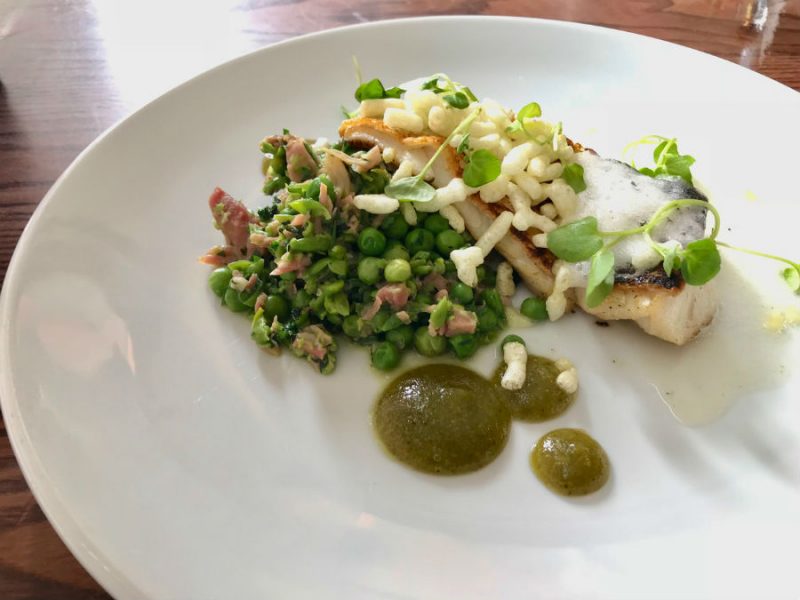 The type of fish varies throughout the country, with cod being the most common. Haddock is the default fish in Yorkshire where it is served minus the skin, which is left on in other areas. There is an EU directive which says that the species of fish must be displayed and whether it is from the sea, freshwater or a fish farm. This is to stop the practice of inventing appetising names for fish whose moniker was less than appealing, such as the London staple ‘Rock Salmon’ which was in fact Dogfish.

There is only one way to cook fish for the take-away shops and that is to batter it and deep fry it in beef dripping. I realise that this precludes vegetarians and vegans from eating the chips but vegetable oils do not get hot enough. The idea is that the battered fish is dropped into the smoking hot fat and the outside seals instantly. This means that it forms its own little oven and the natural water within the fish steams it in the same time that it takes the fat to fry the batter. The result is a wonderful golden crunchy outside and a perfectly cooked inside. If oil is used it seeps through the batter before it has chance to seal, and fries rather than steams the fish so it ends up greasy. I suppose that they could use oil to fry the chips but again it permeates the potato rather than gives it the exterior crunch and the fluffy middle. 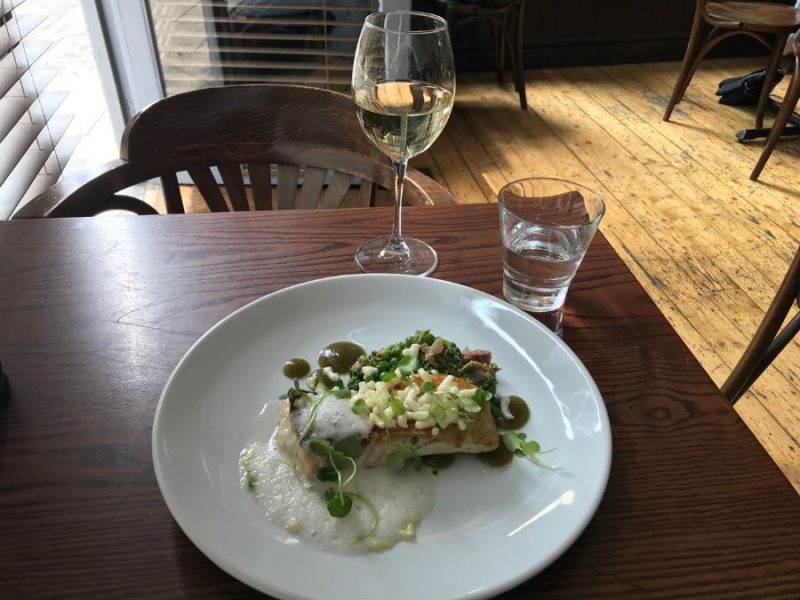 Back to Art’s Cafe and I could almost hear Messrs Malin and Lee spinning in their respective graves as, not in their wildest dreams could they have imagined the version of their, albeit disputed, invention. There were two ‘modern’ options to vie against the traditional version, the first being ‘Pan fried sea bream, vegetable, ham hock and pearl barley broth, fennel salad, ham hock bon bon and grilled courgette’.

As I have never been offered sea bream in my local chippy I decided to see what their update of the original was so I ordered ‘Oven roasted cod, gherkin ketchup, potato scraps, peas cooked with ale and ham, pickled onion foam’. The mere mention of foam makes me think that I will be served with a beautiful plate of food but nothing to eat on it. I was half right in that the dish was immaculately presented but there was ample to satisfy my lunchtime appetite which was just as well as I had foregone the starter of soup and bread, it being such a hot and humid day.  As I was sampling the haute cuisine version I resisted the temptation to ask for tea, bread and butter to accompany the meal and settled instead for a superb glass of Castillo Ladera Airen/Sauvignon Blanc.

Had I been served this in a piece of newspaper at my local chippy it wouldn’t just have been the fish which would have been battered, but this is not fill you up comfort food, it is beautifully crafted cooking at its best. Now let’s see what they come up with for National Pie and Pea Day. 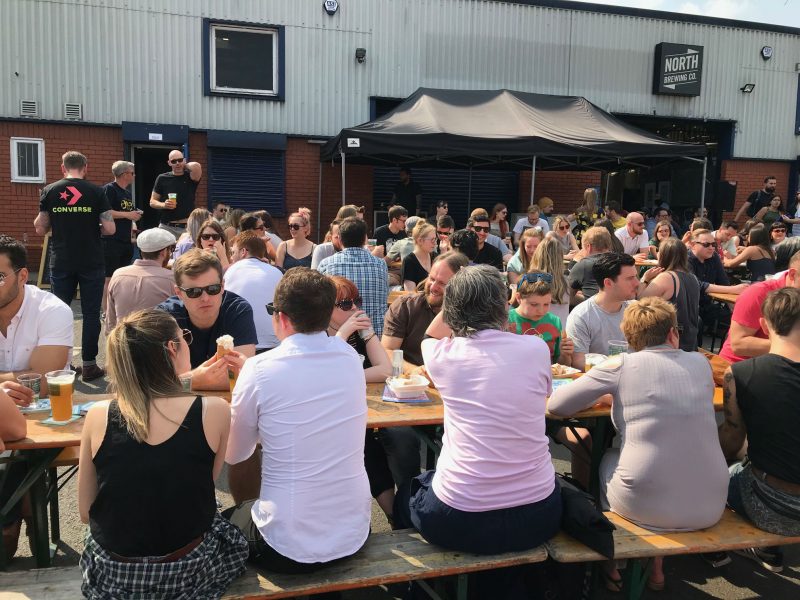 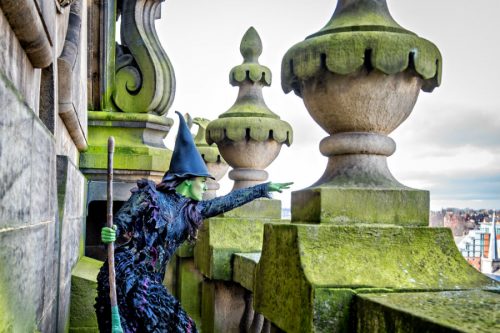 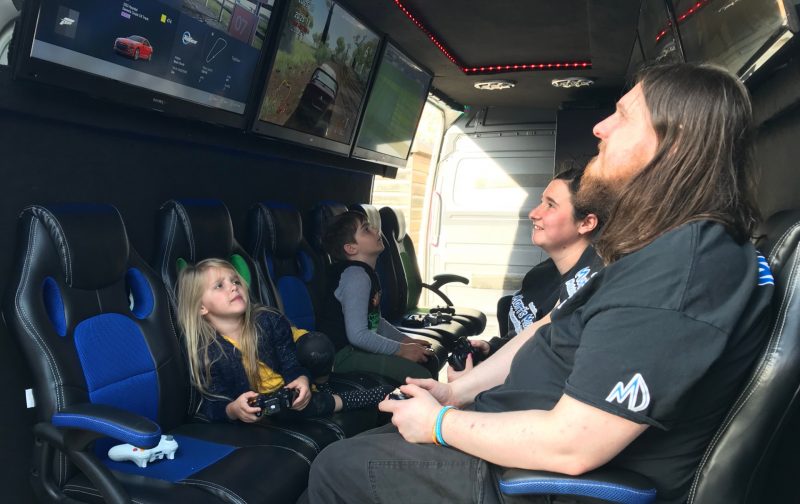 A Leeds Business – Celebrating a Birthday With Good Heart