Review: Eating at The Karachi in Bradford

It’s not often that I cover events outside Leeds.  I think the name Leeds Living is a subtle hint as to why, but now and again I am dispatched farther afield to write about an event with a Leeds connection.

Such was the case here when I was asked if I would cover the premiere of a play in neighbouring Bradford. Not only did I quickly accept, as I fancied the piece anyway, but I also thought that it would give me the opportunity to wallow in a sea of nostalgia, having worked in Bradford for several years during the last century.  After a stroll around town, which has changed so much as to be unrecognisable, I resolved to have a pre-theatre meal at my favourite lunch spot from back in the day.

As far as the people in my office were concerned, there were only two types of places to go for a Ruby; a curry house or an Indian Restaurant.  The former usually had formica tables, vinyl flooring, tubular steel chairs and menus on a wall-mounted peg board.  Indian restaurants by contrast were very opulent places with – usually threadbare – carpet, well worn upholstered seats and printed menus, sometimes in plastic covers. The odd one or two were also known to have tablecloths.  The Karachi Restaurant in Neal Street just up the hill from the National Media Museum as it is now known, was firmly in the former category.

On the bus approaching Bradford down Leeds Road I was shocked to see some of the palaces which are now purveying food from the sub-continent, I have seen restaurants in five star hotels falling below these standards. I was at once elated in that it is great to see Bradford going up-market, and anxious that some interior designer of loft apartments might have been given free reign with my beloved Karachi.  As I walked along Neal Street, a normal row of terrace houses, I saw that the outside of the building had been given a clean and it appeared that new windows had been fitted. My walking pace slowed down.  Should I go in and risk my memories being shattered or should I eat somewhere else.  I decided to risk it and walked up the familiar three steps and through the door. Arghhhh! Carpets, immaculate upholstered chairs, clean walls – there was still smoking allowed the last time I was here so the original white walls were a dark shade of magnolia – and what is that I see?  Paper menus. 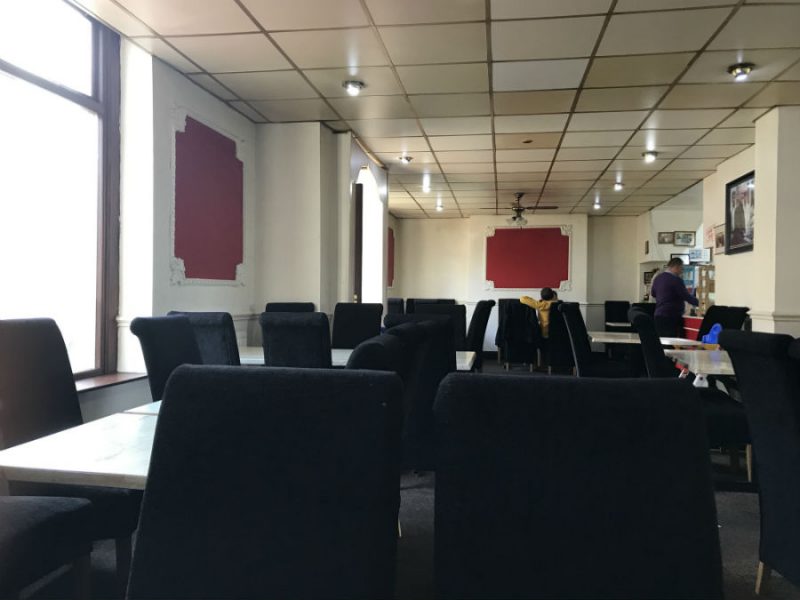 I was in now and it would have been rude to turn around and walk out, so I had a closer look and was reassured to find that the old familiar open kitchen was just as I remembered it.  The standard of fixtures and fittings in days gone by was not the best in the world, but the place was always spotlessly clean.  I found a table and perused the menu. The range of dishes had expanded but all of the fun had gone out of ordering as it was perfectly obvious as to what everything was. You needed to have worked at Bletchley Park in the old days, as over the years a lot of the letters on the peg board had been lost, so they were replaced by numbers or other letters at eccentric angles to substitute for the real one. This meant that it looked like a list of car number plates where drivers had tried to be creative in order to spell out their name, usually failing miserably.  I longed for the days of the 81ry4n1 (Biryani) or 5h335h K3848 (Sheesh Kebab). What did reassure me was the familiar sight of the waiter appearing with a jug of water and a small dish of raw onion and tomato in yogurt before taking my order. 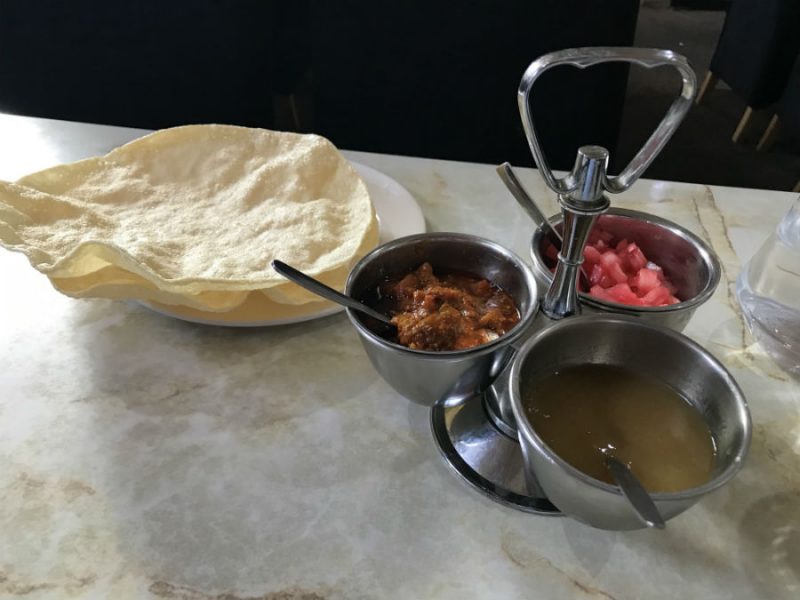 I already knew what I wanted before I had entered the place and that was 0n10n 8h4j1, sorry, Onion Bhaji and Karahi Chicken. I added a couple of popadoms and the pickle tray to the order and waited for the goodies to arrive. Although there were only a couple of other diners in the restaurant when I arrived at 6.30, a party of half a dozen soon joined us and there was also a steady stream of callers picking up take-away meals.  Before too long my poppadoms arrived with the pickles, which comprised mango chutney, lime pickle and diced raw onions. Some things never change. The poppadoms were free from the oil in which they had been fried and were spot on. I didn’t mind what kind of fate had befallen the karahi but I was hoping against hope that the onion bhajis were as I remembered them. 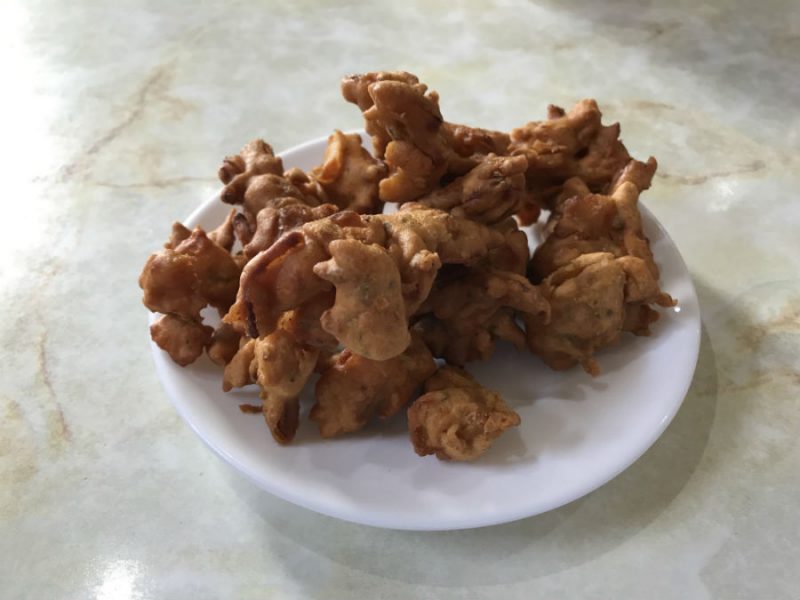 I needn’t have worried as the moment they arrived I was transported back to the eighties.  I have never had any onion bhajis quite like these.  They are more like pakora, the strands of onion being fried almost individually in the most amazing spiced batter, rather than being the big doughy clump that you get almost everywhere else. I had remembered the best way to eat them and that is by saving the plate of onion and yoghurt, the tomato had been dispatched, and dipping the bhaji in that.  Paradise. 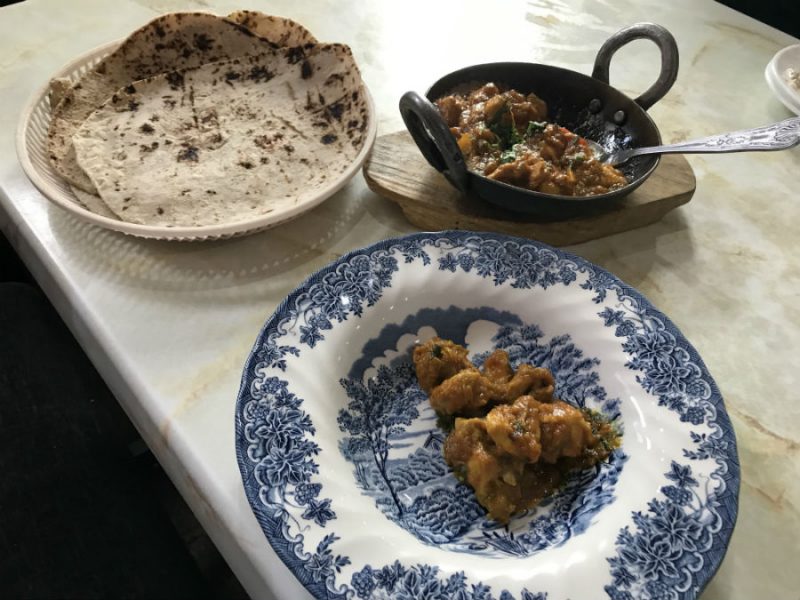 The karahi had indeed changed, the chicken now being cubed rather than in larger pieces which fell apart when they came into contact with the chapati.  Still no knives and forks here, thank goodness, or table cloths. Karahi is a dark, rich, spicy curry whose recipe varies from region to region in India and Pakistan. It is named after the small wok-like dish in which it is cooked. It is like an older version of balti – but better! The taste was just as I remembered, even if the texture had changed. It also had the familiar hit of spices and garlic, perfect for when you are just about to take your seat in a small theatre above a pub. At least it meant that I wouldn’t have anyone sitting next to me on the bus home.  I had all on to stop myself from wolfing it down in no time flat.  This had to be savoured so I spooned out small helpings from the karahi into the dish provided.  Well, that didn’t work so I had a chat with the waiter, and took a couple of photographs of the staff. Thankfully, that is another thing that hasn’t changed. They weren’t the same members of staff, of course, but just as friendly and eager to help.  Whisper this, but the two waiters even had black uniforms, and very smart they looked, too.  I paid my bill, cash only, and made my way to the play. 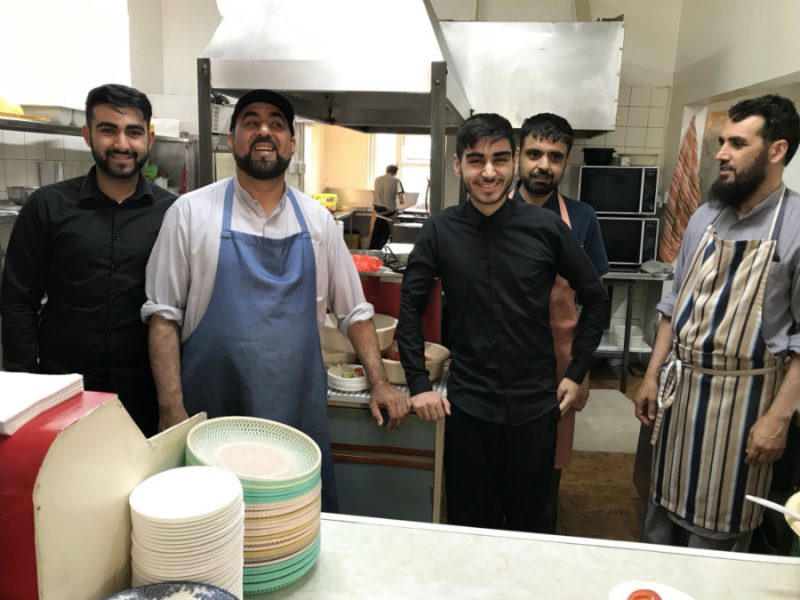 I want everyone in Leeds of a nervous disposition to look away now. The bill for the poppadoms, pickle tray, bhaji, karahi and chapattis came to £10.50!  A steal.  By the way, the premises are not licenced, but you can now bring your own booze.  In the old days it was strictly forbidden to drink alcohol on the premises and I have seen more than one person ‘asked’ to leave for sneaking a gulp from a can in a bag.

I will leave you with a couple of quick tales about this place, both of which happened after I had been transferred. The first was that the owner was featured on Rick Stein’s Local Food Heroes series, which was fine. The second happened when the photographer David Bailey turned up one morning unannounced to take some pictures of the place and its owner for a TV series which he was making. The owner was not in at the time, so a member of staff rang him to say that they had a celebrity in the place and he wanted to take some photos of him.

‘What’s his name?’ asked the owner.

I have always wondered how much a series of photographs by David Bailey would cost.