Review:  Dough in the City

Whereas Vice and Virtue is a fine dining establishment, Dough In the City is a relaxed bar serving very good food but a bit more down to earth in both presentation and price. It has to be said it doesn’t mean a compromise on quality, far from it. The head chef and owner, Luke Downing, kicked off the evening by explaining that the ethos behind the new dishes was that he wanted to create what could loosely be described as traditional pub food, but using the best ingredients and cooking techniques. I was pleased to see that, in addition to the cocktails and craft beer usually associated with the bar, there was a pump dispensing cask conditioned Tetley No.3 to back up that claim.

We were treated to a couple of house cocktails to sharpen the appetite, the first based on pineapple, which was very refreshing and the second tasting very much like bitter lemon. They both did their job admirably and I found myself well and truly in eating mode, not that that takes much doing. Starters were served as sharing plates so that we could sample the full range, and what a range. 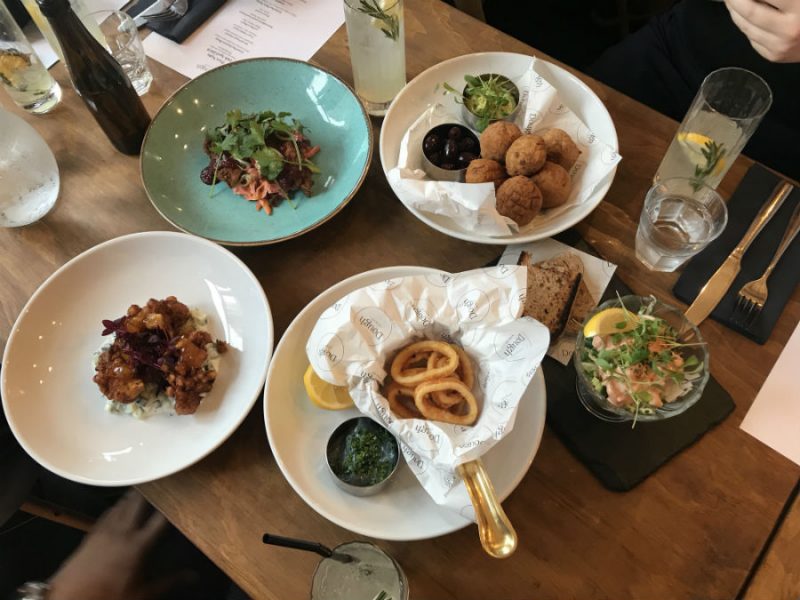 Some of the dishes were more ‘traditional’ pub food than others, but all were delicious. The more exotic offerings were Salt and Pepper Calamari with black garlic aioli, turmeric and lemon, which was perfectly cooked and not overdone so as to become rubbery. The proper Falafel (Vegan) with hummus, olives and Asian slaw was a total surprise, as instead of being dry crumbly chickpea balls, as is usually the case, they were smooth and crispy on the outside with the pureed chickpea providing a soft centre. The Asian slaw had a bit of a kick, as did the olives, and the hummus was spot on. Delicious all round. 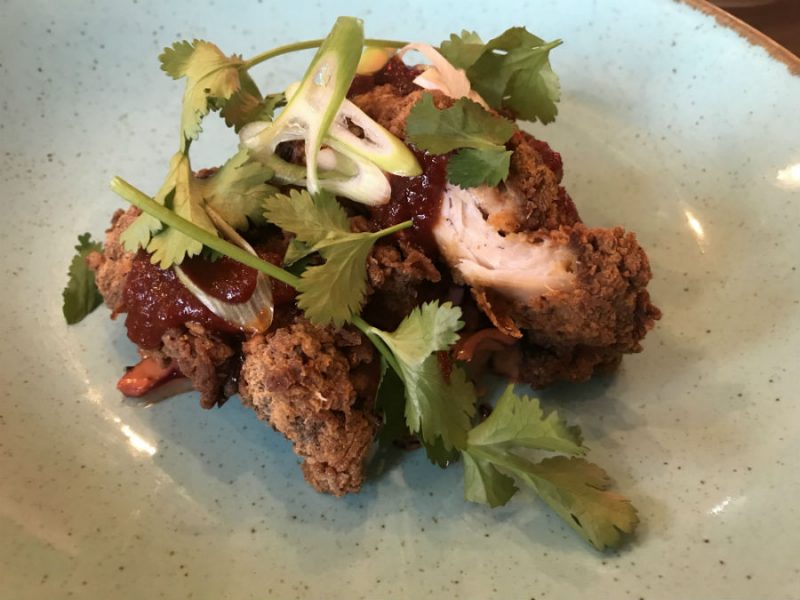 Cauliflower Bhaji (V) laid on top of raita and topped with mango chutney was superb, being crisp spicy batter containing al dente cauliflower. Next was Buttermilk and Sriracha Fried Chicken with Asian slaw and kimchi. This is beginning to sound a bit sycophantic, but once again the meat was perfectly cooked and the flavour combinations superb. Finally, we came to the true traditional pub starter of Classic Style Prawn Cocktail. Being of an age when the height of sophisticated dining was prawn cocktail, T-bone steak with all the trimmings and Black Forest gateau for afters, I can state that this took the dish to heights unimaginable in the early 1970s. The Marie Rose sauce was far better than the mixture of mayo and ketchup which was inflicted on us in those days and the bread was toasted sourdough rather than sliced brown; a wonderfully upgraded blast from the past. 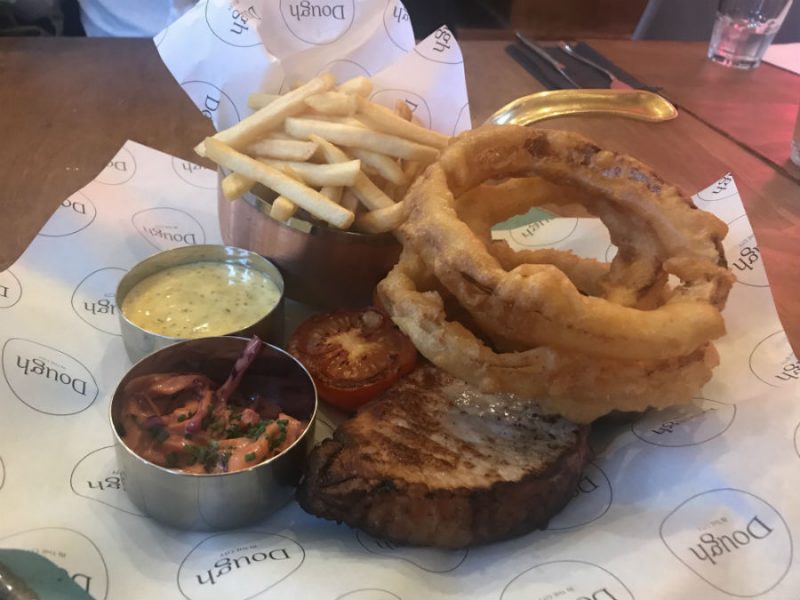 The main courses were served in a more orthodox manner by being given a choice of dish each from the sample offered. In the absence of T-Bone with which I could further relive my twenties, I opted for Saddleback Pork Loin with beer batter onion rings, confit tomato, mushroom, Bérnaise and Asian slaw. The meat was cooked medium and very tender, the onion rings crisp and sweet whilst the Bérnaise had a contrasting piquancy, the Asian slaw you already know  about. The only thing I didn’t understand was that the tomatoes were described as confit, which means preserved or cooked for a long period in order to preserve, so I apologise if Mr Downing had been slaving over a hot stove for some length of time as they seemed to me as though they had just been grilled. That is not a criticism as, like everything else I had been served during the evening, they were delicious, as were the mushrooms. There were also some thin cut fries which had stowed away unannounced. Not only was the dish delicious but it was also spectacular to look at, so much so that it was getting a bit cold by the time I got round to eating it.  This was because I was the only one who ordered it, so I had a stream of bloggers, influencers and instagrammers queueing up to take photographs.

I had not ordered dessert as I was away from the table when the waiter arrived and I was pretty full anyway. It is funny how you suddenly get an extension to your appetite when something delicious looking is served to everyone else but you, and this was no exception. A succession of plates arrived bearing Jameson’s Sticky Toffee Pudding with raisin, maple and pecan ice cream with toffee sauce. One of my fellow diners was silly enough to ask if I would like to try some of their pudding so, needing no second request, I dug in. It looked as though it would be really heavy in texture but was light as a feather and the sauce was not cloying either. I also love the contrast between hot and cold and would far rather have a good ice cream, as this one was, with a hot pudding, than custard. 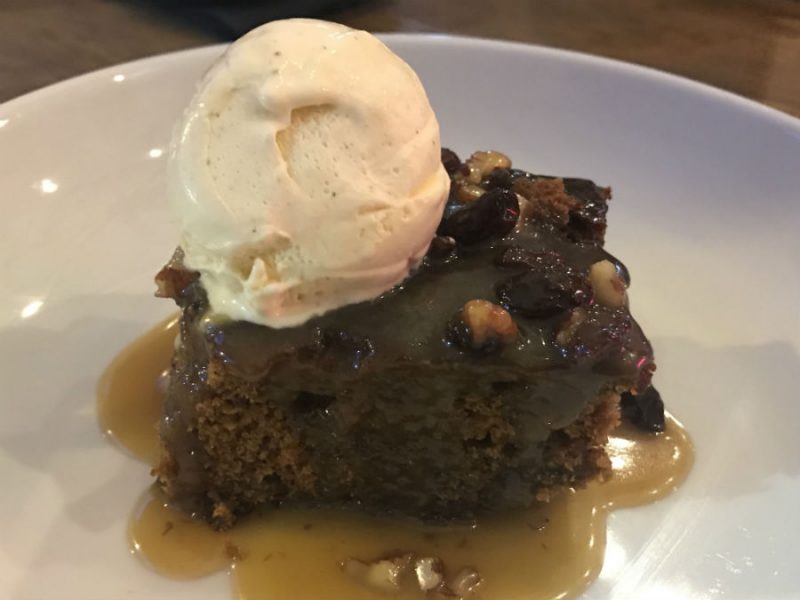 After dinner, I saw Luke Downing at the bar so went over to say how much I had enjoyed both the food and the evening as a whole. I was also interested in the way that the pork had been cooked as there is a movement nowadays toward serving it on the rarer side of medium. He explained that it is all to do with the ageing and as the loins are aged individually they have to be cooked to a higher temperature than pork from larger cuts, meaning that they are served medium rather than pink. You never stop learning with food, as with life, and for some of us, Luke Downing included, food is life. 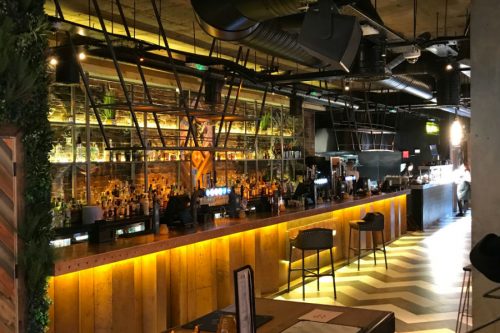 Let’s Do Lunch at Smokin’ 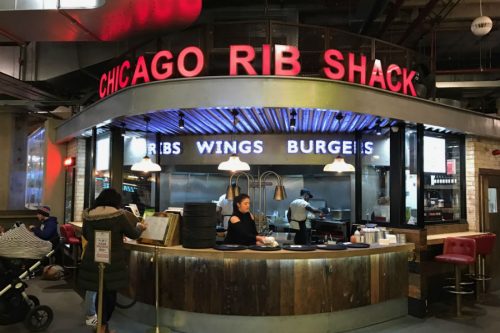 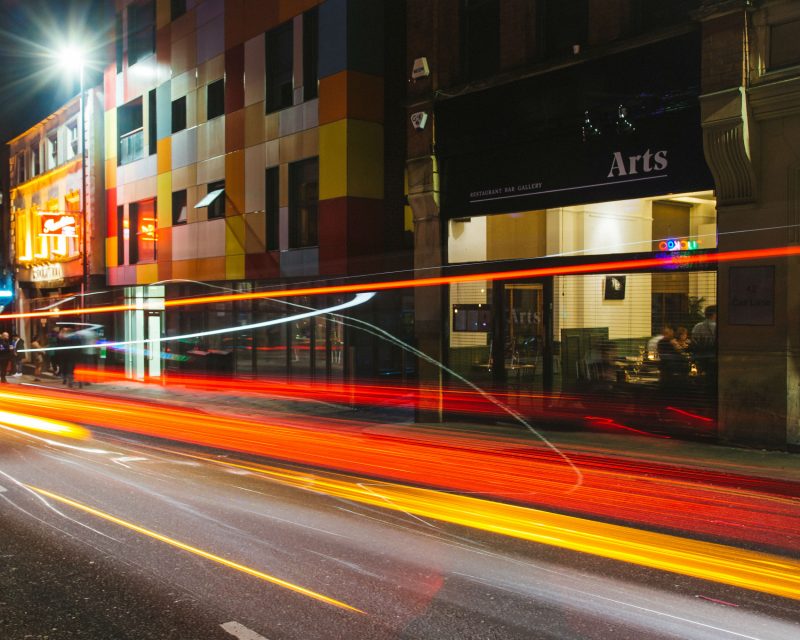