They say that you should never go back to somewhere you’ve already been as it’ll be a disappointment the second time.

I stopped listening to ‘them’ years ago so I decided to have a second trip to the Corn Exchange after Independents’ Day on Thursday 4th, July.  Besides, my editor told me that I had to!

Right, I thought, if I am going to return to the scene I am having something to eat and drink, which is exactly what I did – twice. First up I had a chat with Andrew Critchett, who runs Ground Up, the new coffee shop on the ground floor, obviously.

As is the case with all of the traders, things are not what they first appear to be.  Ground Up is a non-profit making venture to encourage people who have been affected by mental health problems, either their own or someone near and dear to them, to come together over a brew and brunch to discuss things and share experiences.  The helpful staff are among this group and so they benefit from the employment, not only financially but also therapeutically.  All the money made from Ground Up goes to mental health projects in Leeds.

Good intentions are one thing, but good food is quite another, so I partook of the All Day Brunch by ordering Smashed Avocado on Sourdough Toast with Chilli Flakes, Sea Salt and Black Pepper for £4.90.  A Black Americano at £2.60 lubricated the meal.  As well as the published guest list to the party, there was a gatecrasher in the form of chopped chives to garnish.  The whole thing was very good, with the chilli flakes giving just enough umph to make the lips tingle but not so much as to overpower the creamy taste of the avocado.  Apart from an egg dish, everything seemed to be vegetarian-friendly and a note on the blackboard proclaimed that vegan/vegetarian options are available. 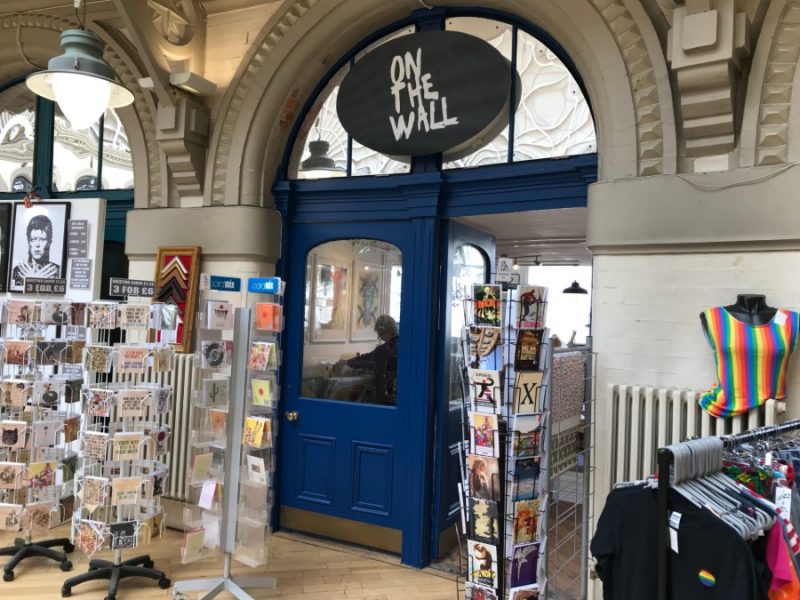 Duly fortified, I went walkabout to have a chat with other unit holders in the building, the first of which was Guy at On The Wall. Anyone who has such a sad life that they read my articles will know that I love a good pun, and especially one which has been thought through. The font in which the name of this poster and artwork shop is printed is almost, but just not quite the same so as to invite a law suit, like that on the Off The Wall album by Michael Jackson.  Brilliant, or should that be Bad!  The place is packed with all manner of pictures from Rothko prints to country scenes and posters as varied as art nouveau, Alice in Wonderland, Led Zeppelin and Jimi Hendrix. There is also comic book art and loads of other stuff. Guy told me that he gets a lot of requests for framing at the moment and this is done to a Guild standard by his framer. It is not only pictures which are treated for display in this way but also signed football shirts and other memorabilia.  Obviously being flat is a great advantage. 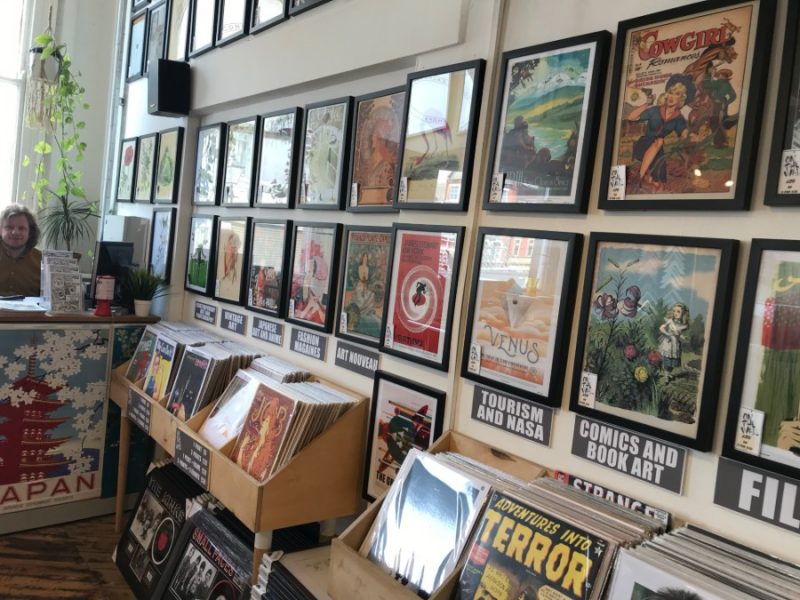 On The Wall has been trading since 2004 when it started in the Corn Exchange.  Guy then moved to premises on Boar Lane but when the lease expired and the new rent was subject to an eye-wateringly large increase, he decided to come back home to the landmark building.  This is one of those places where I could spend hours reminiscing over the pop concert posters, but sadly I had to leave and continue my quest. 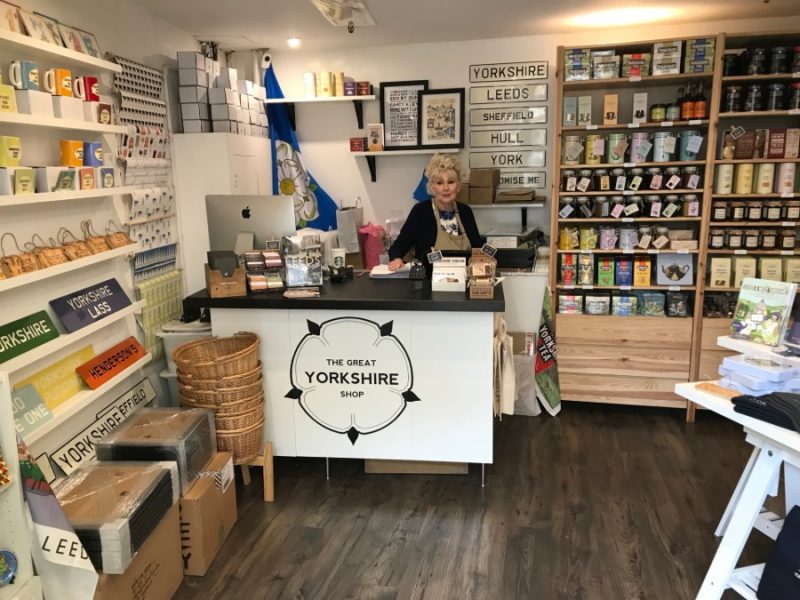 Next up was The Great Yorkshire Shop which, as its name suggests, is laden with all things from God’s Own County. There are the usual baseball caps, bags and other gifts, through to books, posters and flags, to a large array of food and drink.  All bases are covered with the inclusion of Taylor’s Yorkshire Teas, jams, chutneys, crisps and biscuits from smaller producers.  There was even a range of soap, shaving and beauty products, just in case you want to pimp up your whippet.

The owner, who regales in the good old Tyke name of Aeneas, is a Yorkshire lad through and through but unfortunately was not there when I called.   His mother was running the place while he had a day off.  Aren’t mums just brilliant? She said that he would visit the Corn Exchange as a lad and it was his ambition to run a business of his own, so what better, and romantic, place to make your dream come true. 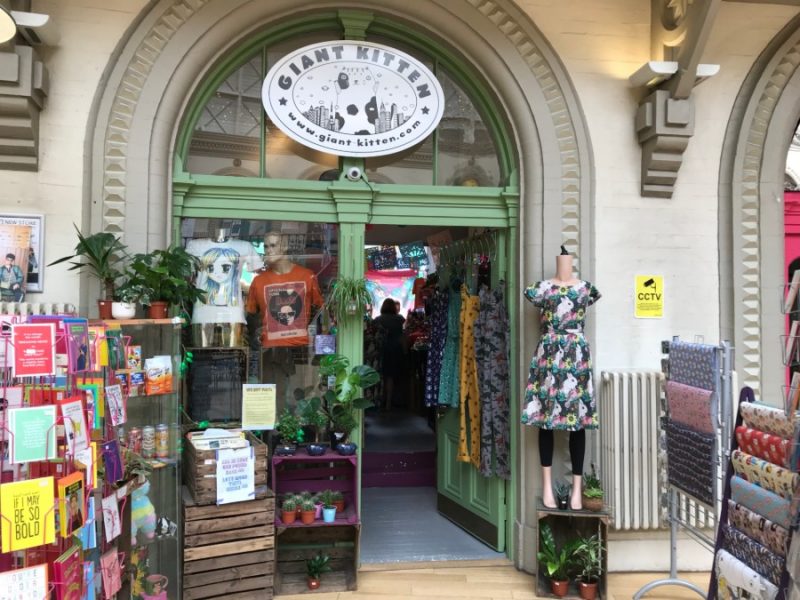 A few days before I did my last article I popped into the Corn Exchange on another matter and, noticing that Primo’s was no longer in evidence, went to the unit next door called Giant Kitten to find out what had happened to the erstwhile hot dog vendor.  I was intrigued by the range of stuff on sale so I just had to call in to have a chat with the co-owner, Carol.  Giant Kitten is a family affair, being owned by Carol, her partner and her 21 year old son.  They sell pop culture items and the place is stacked with all manner of stuff. 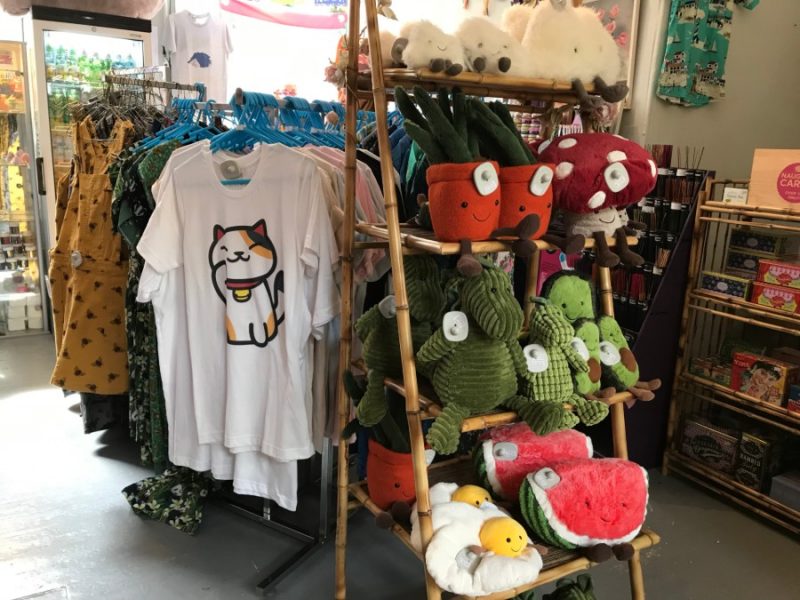 The business began as Culture Vulture some twenty years ago, selling comic books, but branched out into other niche goods. They have been in the Corn Exchange for five years now.  Because of a clash of trading names, they decided on a rebrand and settled on Giant Kitten because they love cats and the giant part is a nod to the Japanese comic books which feature huge creatures, a kind of cuddly Godzilla.  Carol said that it is great that her son has come on board as it keeps the business fresh and up to date. Their main client base is the student and art communities owing, in part, to their ethical credentials. Their T-Dresses are made in the UK and T-Shirts are organic. They also sell a lot of second-hand items like records and clothes.  This is another place well worth a leisurely browse. 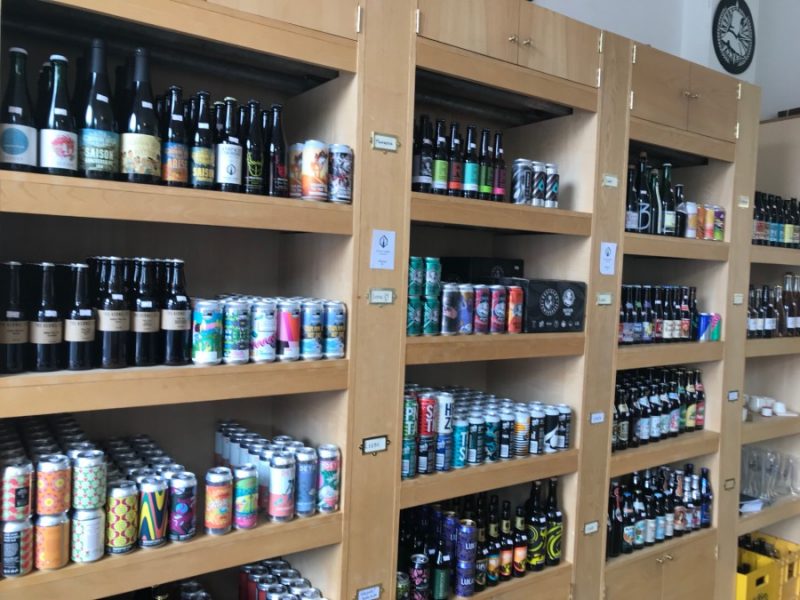 On my previous visit, I called into the opticians, EyeKit, as I have always had a thing for glasses. I decided to carry on this theme by calling at the Little Leeds Beerhouse to see what their glasses had to interest me.  I am ashamed to say that I have never been in here before, but I certainly will be calling again.  I assumed (a dangerous thing to do) that it was an off licence, but no.  Although there is a comprehensive range of canned and bottled beers, and the odd wine or two, you don’t have to take it home with you as, for no extra cost, you can drink it on the premises.  In fact, there is even a range of taps from which they dispense draft craft ales!  A couple of tables and a long bar at the window overlooking Vicar Lane make this a great watering hole, especially if you enjoy people-watching, as the view of the street below provides more than passing interest.  Sadly, once again the owners were out but the chap running the bar was very helpful, telling me that they had been trading for four years now.  He was also a master at ale dispensing.  What else do you need to know? 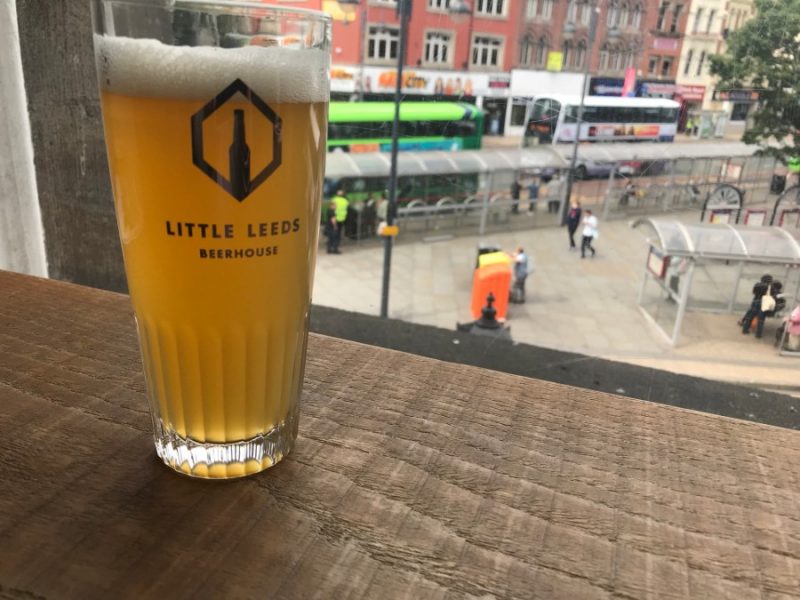 I enjoyed my second visit to the Corn Exchange just as much as my first, and this time I had brunch and a beer. My gratitude must go out to my editor for sending me back.  If last Thursday was Independents’ Day then Monday 8th July is the new date for Thanksgiving. Y’all come back now! 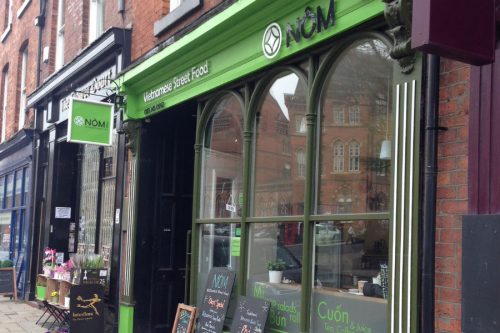 Let’s Do Lunch at NOM 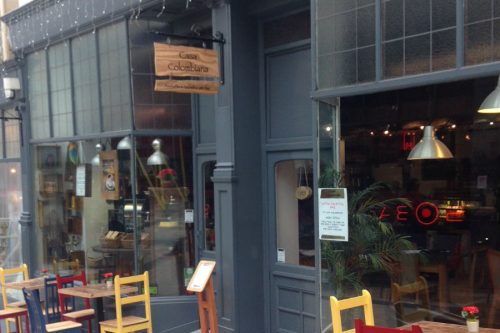 Let’s Do Lunch at Casa Colombiana

Little Greats Part 2 – Osud and Trouble in Tahiti – A Review