I must confess to having a soft spot for the beautiful town of Ilkley. In a previous existence I used to spend my days travelling round the Bradford area and I would always try to arrange my calls to end up in Ilkley on Friday afternoon so that, after getting my weekend shopping from Booth’s, I could drive to my home, which in those days was Sowerby Bridge, over the moors in next to no traffic whilst thinking of the nose to tail rush hour commute I would have had from the office. When I was asked to make a trip down Memory Lane on behalf of Leeds Living to cover the opening of a new wine bar I obviously jumped at the chance.

Unfortunately the weather was not playing ball as I left home in the teeth of a blizzard so a nostalgic stroll along The Grove was a non-starter and I arrived at The Ticket Office a bedraggled mess. I was in such a state of dishevelment that I was politely informed by the owner who was greeting the guests at the door that this was an invitation only event. I explained, equally politely, that I was on the list and, after a sincere apology, the velvet rope was opened. To be fair, I would have questioned my credentials had I been the proprietor as this new cocktail bar is an absolutely immaculate place with no expense spared. Once I had divested myself of my quilted jacket and trapper hat, revealing my Brooks Brothers sweater and matching navy slacks I felt, and looked, much more at home. 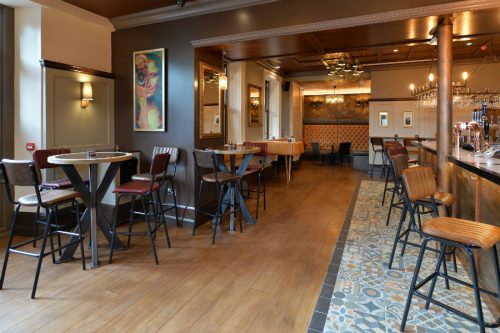 The decor is classic with a modern twist. Chandeliers, dark wood ceiling and bar all imaginatively tweaked to make the customer feel that they are somewhere very special, which they are. There was even parquet flooring, but on the wall! There are two parts to the bar, the main room at the front with more formal tables and chairs, and a much more relaxed study type room at the back with easy chairs and lower tables. The pictures on the walls are novel takes on the Mona Lisa. I am beginning to sound like an estate agent now so I will progress to the main reason for the bar’s existence.

All bases are covered on the drinks menu with everything from cask and craft ales through a small but comprehensive wine list to the stars of the show, cocktails. Purely in the interests of research I imbibed a sample from each heading. I began with a pint of the sole cask ale, an excellently kept Ilkley Blond which was clear as a bell, light, hoppy and refreshing which was just what was needed after the tortuous bus ride. There were five draft craft beers on offer as well as a dozen bottled and canned varieties. A note on the menu suggested that you ask about the selection of seasonal ciders available. 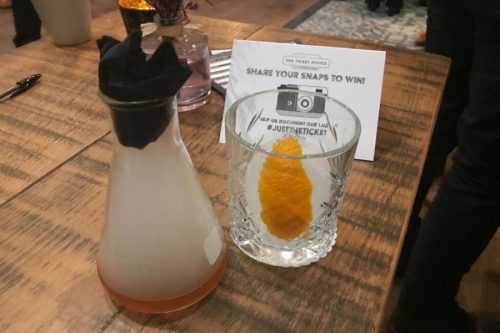 My next course was a cocktail which I chose from a list of twelve plus a ‘Cocktail of the Moment’. Being a traditionalist I passed over the ones with the fruitier ingredients and plumped for a ‘Smoky Old Fashioned’. A regular Old Fashioned is made by infusing a sugar cube with bitters, adding ice, a touch of water and a measure of bourbon. This version arrived in two parts, a glass with a sphere of ice about the size of a snooker ball and a flask like the ones in a science lab filled with the bourbon, the melted bitters infused sugar lump and a lot of smoke. I braced myself for the second embarrassment of the evening when I took the stopper out of the flask and activated the fire alarm and sprinkler system but thankfully I was spared. After pouring the contents of the flask into the glass with the ice – does this make me a mixologist? – I sampled the result. The smoke had indeed given the mixture another dimension and made it taste as though the whole thing had been matured in a charred oak cask, delicious. Should you be in the mood for the signature cocktail, Rhubarb Triangle, 50p will be donated to Ilkley Candlelighters, the local childhood cancer charity.

Finally, as some delicious canapés were being offered, I sampled a glass of Merlot. There are fourteen red wines on offer with three being available by the glass, ranging in price from a Portuguese vino tinto at £17.95 per bottle to a £100.00 Chateau Lagrange Bordeaux. The white selection comprises thirteen bottles with six available to buy by the glass, again prices start at £17.95 but peak at £80.00 for a Mersault. The rose section has two choices in both bottle and glass sizes. Finally the sparkling wines range from a Prosecco at £27.50 to a £150.00 Dom Perignon, two being available by the glass, including an English variety which is good to see. 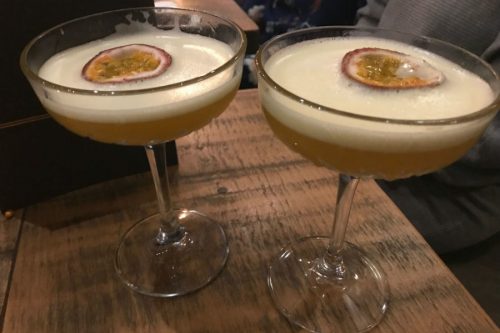 Although the opening night is 1st December, there are plans for 2018 which include an outdoor seating area and a food menu. As The Ticket Office is primarily a bar the food range will not be extensive but the ingredients will be sourced from local suppliers. If the same imagination and skill is shown in the food preparation and execution as is shown in the cocktails, and I have no reason to doubt that it will be, I can imagine The Ticket Office being a destination in its own right rather than the starting and/or finishing point for an evening out which is how it describes itself at the moment.

Eventually I had to drag myself away and venture into the freezing night air. The bar is conveniently situated in the railway station – obvs babes – so it was only a short walk to the Leeds train. I followed the sign for the machine at which to pay my fare but could not locate it so I took the gamble of the guard being in the mood to take my money rather than slap me with a fine for fare dodging, which luckily he was. Of course I would not have had this dilemma had someone not had the bright idea to turn The Ticket Office into a cocktail lounge!