On 12th September, 2019 I was privileged to attend the unveiling of a Leeds Civic Trust Blue Plaque at the Holbeck Working Men’s Club.

You might be wondering what is so special about the place.  Well, even if you weren’t, I’ll tell you anyway. Holbeck WMC is the oldest continuously functioning working men’s club in the country, having been formed in 1871. It opened in its current premises at Jenkins Lawn on Easter Monday 1878.

Its story is a tumultuous one and explains why many others have fallen by the wayside.  The Club was originally formed to help working men gain access to education, social activities and to strengthen community relations.  Bars were gradually introduced to fund these objectives and in time they became the core of the club movement. Over the years the demographics and lifestyle of the country as a whole have changed, with people buying their alcohol from supermarkets to drink at home in front of a TV showing hundreds of channels and box sets.  The smoking ban and various recessions have also taken their toll. Add to this the specific issues of Holbeck, when the high rise flats of the area were demolished and the rebuilding programme then put on hold, and you have almost the perfect storm. Actually, the perfect storm was still to come. When the redevelopment did eventually take place, the new residents were from cultures to whom the particularly working class British club nights were a total mystery.  The Saturday night ‘turn’ interrupted by three or four sessions of bingo is a mystery to most British people outside the North of England, so incomers had no chance. 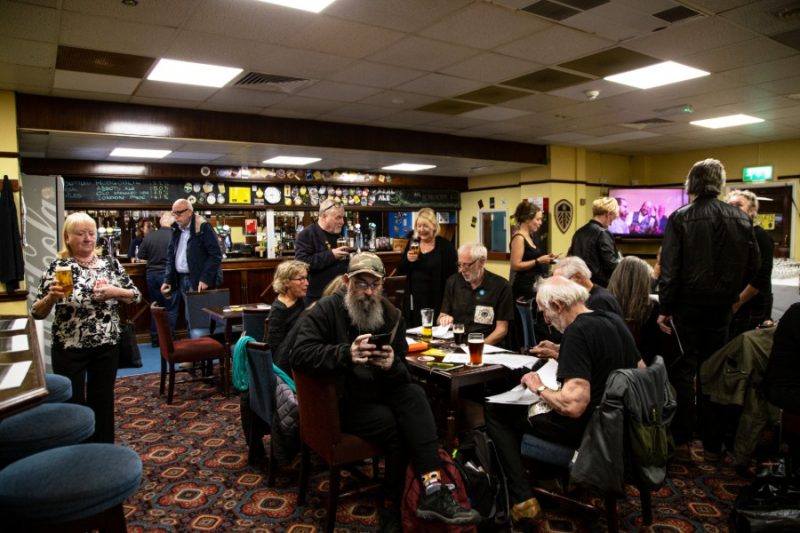 Despite being thousands of pounds in debt at the turn of the century, the committee decided not to go down without a fight and unpaid volunteers worked all the hours they could spare and explored the different ways in which they could make Holbeck WMC not only a community hub but also a destination venue.  They tempted Slung Low, an award-winning theatre company, to relocate and to stage productions in the concert room.  They use it both as an artists’ development space and somewhere to invite other companies to perform.  Admission is on a ‘pay what you decide’ basis after the show.  I recently reviewed a series of short plays, imaginatively titled Slung Low Shorts, and they were excellent. 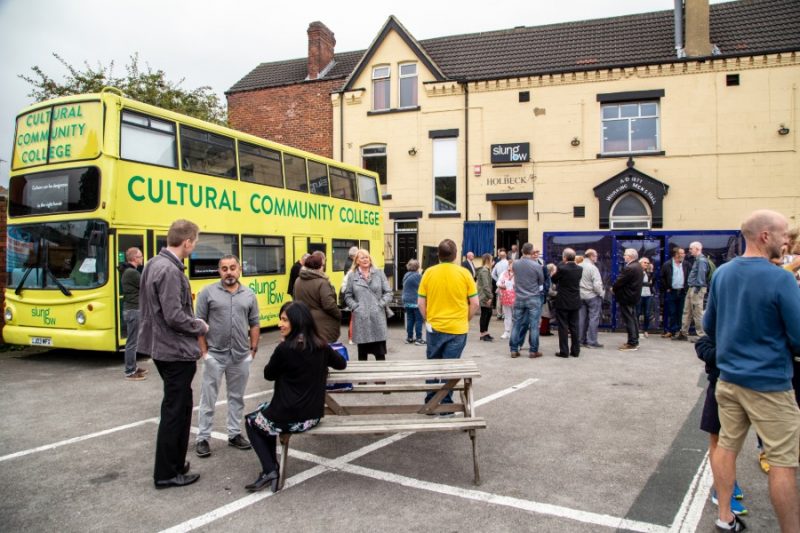 In addition to the Slung Low events, in 2018 they went back to the original aims of the Working Men’s Club movement, one of which was to educate, and they did this by establishing a Cultural Community College which runs courses, again on a ‘pay what you decide’ basis.  Those currently on offer cover everything from Bread Making, through an Introduction to Boxing, to Beginners Ukulele. The people from Manjit’s Kitchen are also running Indian vegetarian cookery courses there.

All of this goes to prove that by thinking laterally and working hard, there is not much which can’t be achieved. The club’s finances are now in a much healthier state and the area has benefited in many ways, not least by attracting people who would otherwise never set foot in a WMC.  I don’t know whether they have got their heads around Elvis impersonators and Eyes Down on a Saturday night yet! 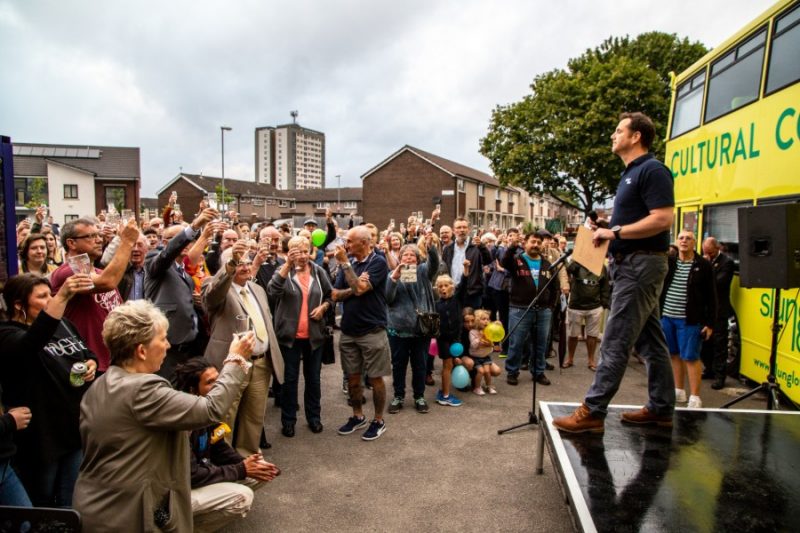 The ceremony itself was a good mixture of entertainment and speeches, both elements of which were of just the right length. The Chair of Leeds Civic Trust began the proceedings by explaining that the Blue Plaque Scheme was to honour landmarks as well as people and this one, Plaque 176, was to do both, celebrating the longevity of the Club and those who had kept it going.

The MP for Leeds Central, Hilary Benn, paid tribute to the efforts of the members and then quoted from one of the archived notebooks, in which it was recorded that the double act who had been proposed to perform there were not considered to be up to an acceptable standard, so Holbeck Working Men’s Club issued a ‘don’t call us, we’ll call you’ letter – to Morecambe and Wise. 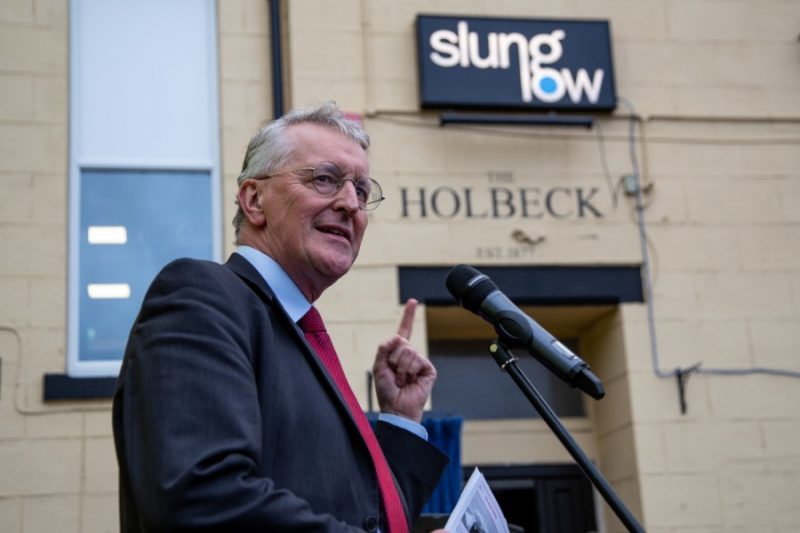 On to the entertainment, which began with Sally Proctor reading a poem written by Ian MacMillan called Holbeck’s Never Ending Story, the last line of which is ‘I’ll tell you what: If we could sing we’d make this poem a song.’ Sure enough, The Commoners Choir who followed and performed four songs, ended with a vocal performance of the poem. 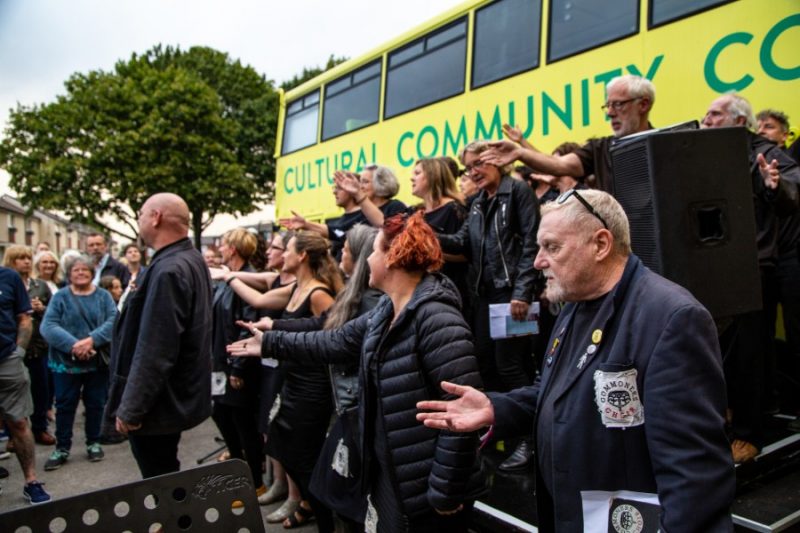 After a toast, we witnessed the main event with the unveiling of the plaque by the Club President Terry Nicholls and Vice-President Ian Pickup.  The curtains opened without a hitch and the plaque was revealed in all its glory. It was then inside for the buffet.  Well, you have to have a buffet at a working men’s club and sure enough, there were pieces of pork pie and pickles on cocktail sticks. Perfect. 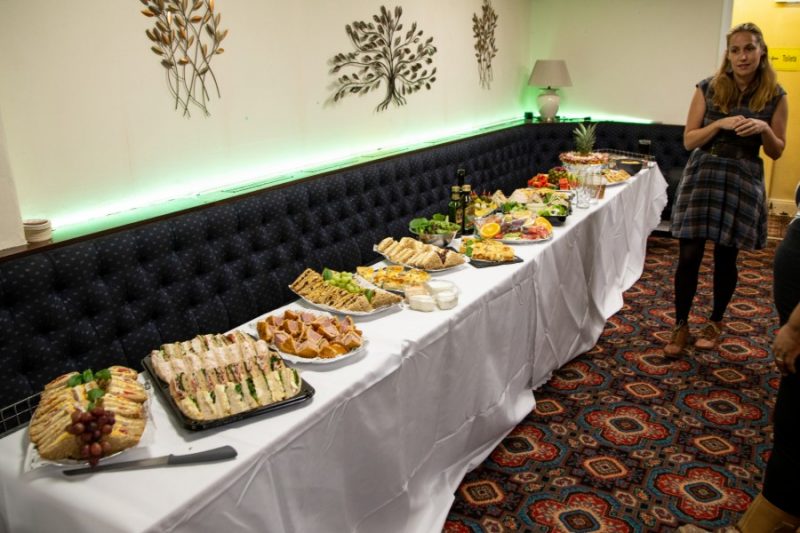 Rather than the evening just being a celebration of past glories I couldn’t help but think that it also marked a new chapter in the Club’s history, which I’m sure will stretch even further into the future than it has done into the past.

Photography by Stella Scheibenzuber.
Stella is working in Leeds with photographer Mark Wheelwright under the Erasmus programme.