It’s not often that you get to witness the setting up of a new world record and even rarer that you are part of it.

So, there I was having a quiet coffee and not disturbing anyone when I get a text from the editor of Leeds Living saying that he cannot take me for a slap up lunch as arranged. I suspect that the restaurant he had earmarked had run out of chip fat, but he asks if I would like to pop along to Split Studios in St Peter’s Square where they were making an attempt on the largest letterpress document ever printed, and there just might be a glass of bubbly and a handful of nuts in it for me. That man’s generosity knows no bounds, especially with other people’s buffets. The downside was that I had to drain my brew and get there from City Square within the next fifteen minutes, which I just managed to do.  Funny, the motivational power of a couple of dry roasted and a slurp of Prosecco.

Split Studios is also the home of People Powered Press, who were carrying out the attempt along with Batley based, JKN Oil Tools, who had manufactured the press on which the document was to be printed. The whole occasion was conducted with an air of light-hearted ceremony in order to make it fun, whilst observing the rituals which were needed in order to produce the finished article and meet with the Guinness Book of World Records’ stringent criteria. Zoe East of Opal Video was on hand to record the event for posterity, and provide evidence, as was James from Watts Group Chartered Surveyors.

Letterpress is the original form of printing developed by Johannes Gutenberg in about 1440, so it beats inkjet and laser by a week or two and is the forerunner of automatic printing machines which later churned out books and newspapers at a phenomenal rate. This, though, was the pure version. It is strange how we have suddenly discovered that there is merit in traditional methods.  You have only to look at the popularity of vinyl records and street food for illustration.

The first part of the rigmarole was Zoe filming James’ measuring of the press with his uber accurate laser gizmo, and once he had confirmed the dimensions of the machine, phase two was instigated. To save time, the blocks had already been set in the frame, or the chase as we professionals refer to it. Typesetting, as this process is known, is an intricate exercise and many more nuts (dry roasted) would have been required if we had needed to witness this being done. 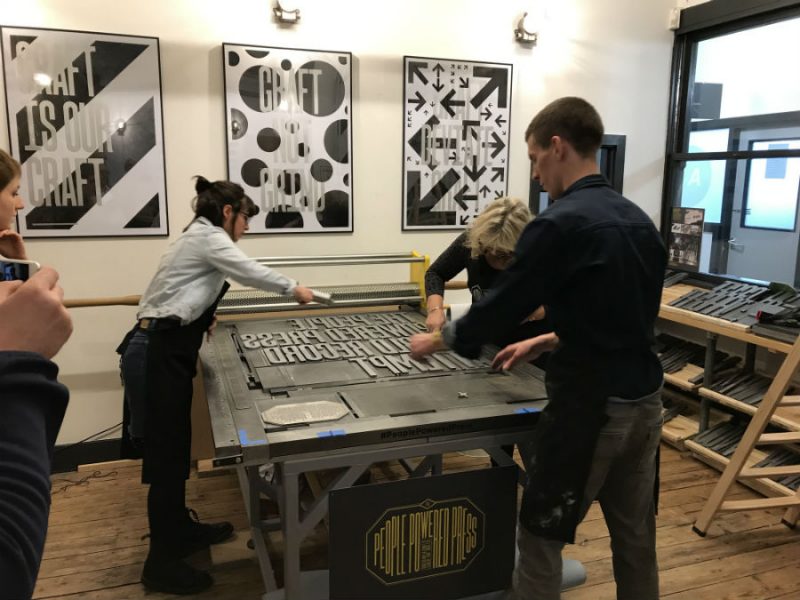 Phase two could now commence, which entailed the ‘inking’ of the blocks using a hand roller. After the ball, or should that be ink, had been set rolling by a professional, we onlookers were given the opportunity to have a go and a great deal of fun it was too, especially knowing that we wouldn’t have to clean up afterwards. As no one broke, dropped or spilt anything it was time to move to Phase three.

I thought that it was very courageous of Oli, the director and printer-in-charge, to let the witnesses participate in this part of the process as it looked extremely tricky, so I took several steps backwards and avoided eye contact. The object was to take the very large sheet of paper onto which the image would be printed and lay it on top of the press. This is where paper and ink first get to meet and any sliding about would mean blurring and smudging. They were all very much up to the job and so the press was primed.

Phase four involved the device’s large rollers being moved up and down the paper in order to apply pressure and transfer the ink to it in a uniform manner. Again, volunteers did the job and again I stood well clear. 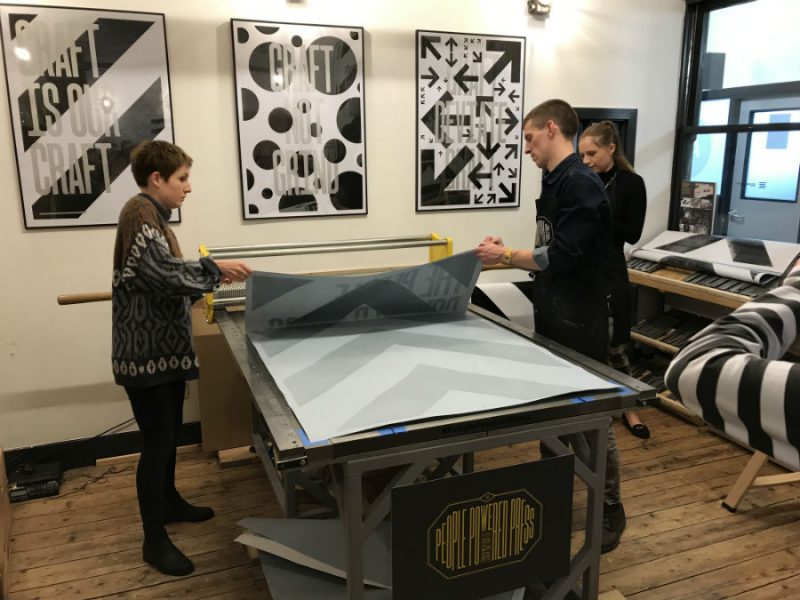 Now, the moment of truth. The paper was removed from the press and held up for all to see. It was brilliant. Both the design and the execution had combined to produce a poster worthy of a place in the Tate Modern. Andy Warhol, your fifteen minutes of fame are over, step up Oli Bentley for your turn in the world spotlight, not forgetting Ian Plant from JKN Oil Tools.

It will take a couple of weeks before Guinness comes back with confirmation that the record has been broken, but either way, the new press will be put to good use in producing high-quality books and promotional materials. There are just a couple of things which concern me. The first is that they are not likely to get many orders from financial institutions who rely on small print to wriggle out of contracts, and secondly, they need to build up a customer base of people with very, very tall bookshelves.

I will report again to put your minds at rest regarding the ratification, but may I thank my editor for sending me and Split for their hospitality as not only were there nuts and Prosecco but also a rather nice Wensleydale with cranberries. Shame about the visit to the chip shop; maybe next time.