Well, that’s that then; the end of another fantastic Leeds Indie Food Festival season. There was just one more event to sample before the curtain fell and that was Whitelock’s Fish Supper Club, held in the dining room of Leeds’ most iconic pub.

On arrival, we were offered a glass of Prosecco which was followed with a top-up and there were suggested drink pairings with each course. I spent the evening with Simon Fogal, who is the organiser of LIF19, and we decided that we should have a bottle of Villa Wolf Pinot Gris.  I say ‘we’ decided:  I decided and he agreed. I also said a bottle, but that turned into two.  Fortunately Ben, the photographer, was on hand to help out in that department.

Head Chef Chris Dennett had devised the menu to present fresh seasonal Yorkshire produce and this was done magnificently.  The meal comprised a seven-course tasting menu of seafood, but there were the odd land-based additions to add contrast and depth as could be seen in the first dish of Smoked Scallop Benedict.  The elements on the plate were English muffin crostini, Yorkshire chorizo hollandaise, samphire foam and sea herbs.  I must say that I found the crostini to be a little on the chewy side but everything else on the plate was inventive, beautifully presented and delicious.  The scallop was large and succulent and the foam and herbs added to the taste of the sea.

Whole Langoustine with Bloody Marie Rose sauce, broiled buttered chicory and smoked bacon dust made up the second course. The langoustine was huge.  I always wonder with this particular fish whether the effort of extracting the small amount of meat inside is worth the hassle, but the taste answered my question.  The chicory was a nice touch, adding body and a charred taste, whilst the sauce was rich and creamy.  The bacon ‘dust’ was a bit more chunky than the name suggests, adding a crunchy texture as well as even more depth of flavour. 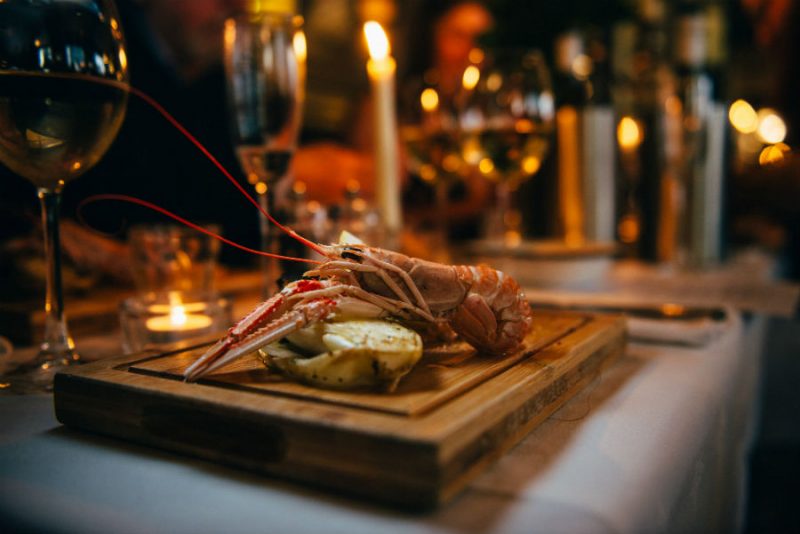 Course number three was the big hitter.  Whitelock’s Sea Feast. There were non-marine interlopers here in Toulouse sausage, corn cobs and potatoes, but the rest of the dish was sorted from the briny.   Shrimps, Pacific mussels and razor clams were all in evidence and made easy to eat by their being shelled.  The combination of tastes again worked well and it was great to have a plate of substance in a tasting menu. I love it when chefs experiment with taste and texture, but in order to appreciate a dish, a proper mouthful is needed, and this provided several. 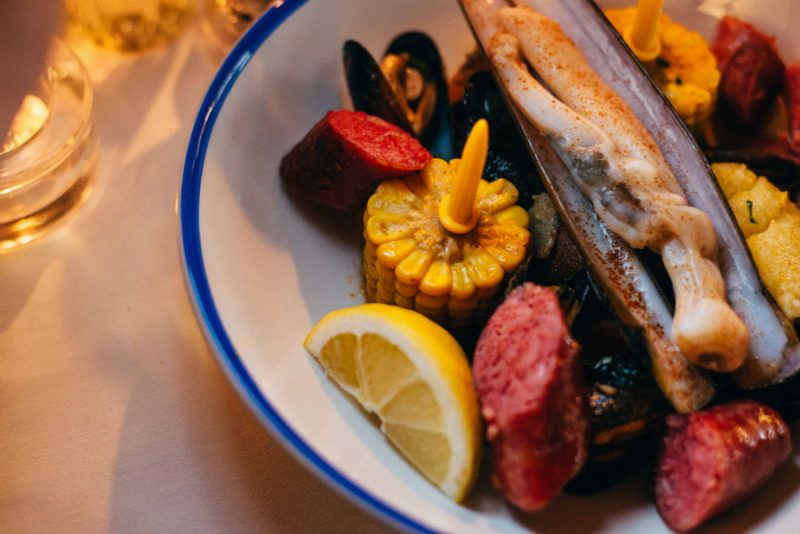 Squid Carpaccio was next, a total contrast to the last plate, with raw squid in a mint and chilli dressing with a dandelion and burdock reduction.  The taste combination was at once sweet and refreshing; just the job. The fish had been cut into small pieces and then arranged beautifully on the reduction, with the sauce placed along the top.  The following course was described as being a palate cleanser, but this did the same job admirably. Capers always cut through sweetness and worked very well here, the squid more than holding its own in the taste stakes. 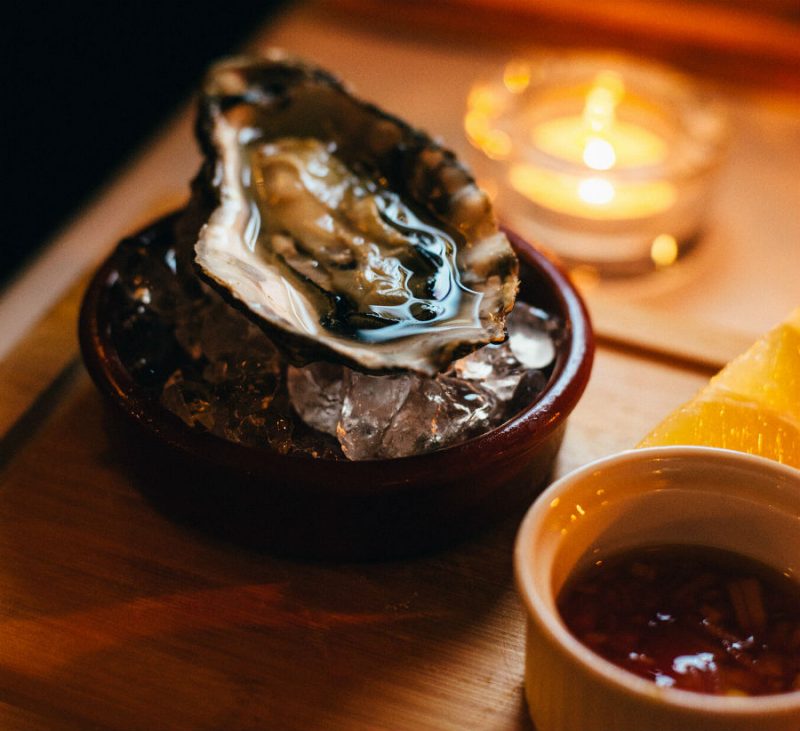 The second palate cleanser finished the job off – a single, simple oyster served with lemon and Tabasco dressing.  There is no middle ground when it comes to oysters, the Marmite of the sea, as people either can’t stand them or are in my camp and can’t get enough.  Once again, the chef had done the work for us by shucking the mollusc and separating it from the half shell as well, so all we had to do was slide it into our mouths. Wonderful.

To finish the savoury courses there was Salmon and Nori Tempura Fritter, crispy fried quail’s egg with miso, sesame and fresh chilli. Once again the textures were the key here, with the light, crunchy batter and the crispy edge to the fried egg enhanced by the sesame seeds.  The taste of the components, the nori (edible seaweed) gave the salmon an intense taste of the ocean and the miso and chilli provided added kick.

Finally came dessert. Raspberry and white chocolate cheesecake, candied pistachios with smoked Malvern sea salt. I bet you were wondering how the sea could be incorporated into pudding.  I was.  Well, there you have it. Thankfully the cheesecake was wonderfully light and the coulis added a good tang.  A fitting end to a superb meal. 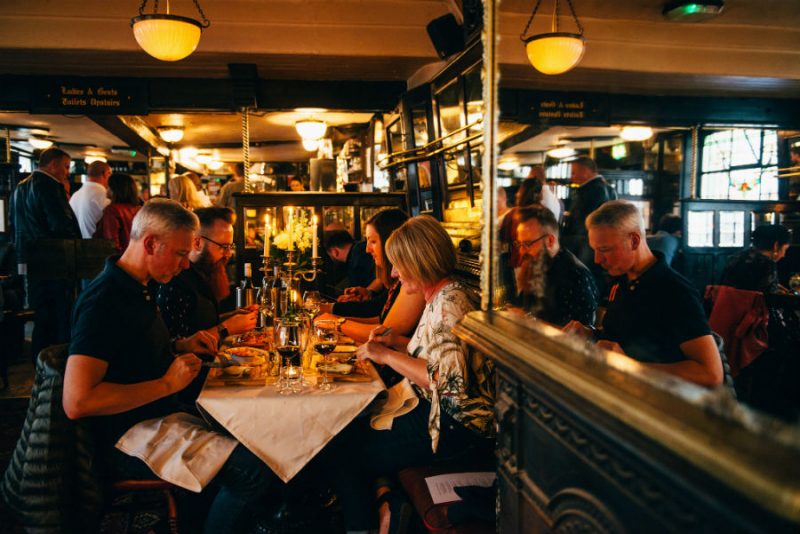 I asked Simon what he thought of this year’s Festival and he said that he was very pleased, as so he should be. My fellow Leeds Living writers and I have been to hands-on events such as a cookery course and a food photography course; we’ve enjoyed food from Italy, Persia and India, to name a few, and we’ve sampled home-grown produce as well as tonight’s delights from the sea. We’ve tried an entirely raw food menu.  There have been events for vegans, vegetarians and meat-eaters; for those with a sweet tooth, a penchant for a particular beverage or fine dining and those who favour the more rustic.  We’ve had transport laid on between venues for one event –  and we’ve settled comfortably into others for the duration.  The scope for entertainment, education and the sheer joy of food has been enormous.  It only remains to award the Leeds Indie Food Festival the highest accolade that a true Yorkshireman like myself can bestow:

All photographs by Ben Bentley.